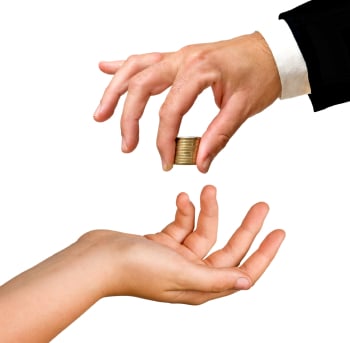 My personal portfolio contains many of the Dividend Aristocrats as this index is full of blue-chip names that have increased dividends through multiple recessions.

We will examine three of my favorite Dividend Aristocrats that will begin trading ex-dividend next week.

First up is AbbVie Inc. (

ABBV, Financial), a leading health care company. AbbVie was spun off from its parent company Abbott Laboratories (ABT, Financial) in early 2013, but has grown into a giant in the industry in its own right. The $239 billion company generates annual revenue of close to $46 billion.

AbbVie is known for its blockbuster drug Humira, which was once the best-selling drug in the world. Patent expiration outside of the U.S. has led to declines in international revenue. Humira also loses patent protection domestically next year. With many biosimilars expected to compete with Humira, the drug will probably become less of a source of revenue for the company.

The good news is that AbbVie has a robust pipeline that should more than compensate for the decline of Humira. In particular, Skyrizi and Rinvoq appear to be two leading candidates for strong growth. Currently, the two drugs have respective sales of close to $800 million and $453 million per quarter. This is a fraction of the $5.4 billion Humira generated, but revenue for Rinvoq more than doubled while Skyrizi was higher by 83% compared to the prior year. Peak sales estimates for both products are expected to be in the $3 billion to $6 billion range.

The pipeline combined with acquisitions are expected to generate revenue in 2025 that exceeds figures for 2021. This is an impressive feat considering Humira accounted for more than a third of total revenue last quarter, but will make very little contribution by the middle of the decade.

Including the years that AbbVie was part of Abbott Laboratories, the company has a dividend growth streak of 50 consecutive years. This makes AbbVie a member of the even more exclusive Dividend Kings, a group of 35 stocks that have at least five decades of dividend growth. The dividend has a compound annual growth rate of nearly 16% since 2013. The company raised its dividend 8.5% for the upcoming Feb. 15 payment. AbbVie trades ex-dividend on Jan. 13.

The stock has increased 28% over the last year. Despite this, shares trade at just 10.7 times Wall Street analysts’ estimates of $12.67 for 2021. The stock has a long-term average price-earnings ratio of 12.6.

The GF Value Line shows the stock to be trading slightly ahead of its intrinsic value. 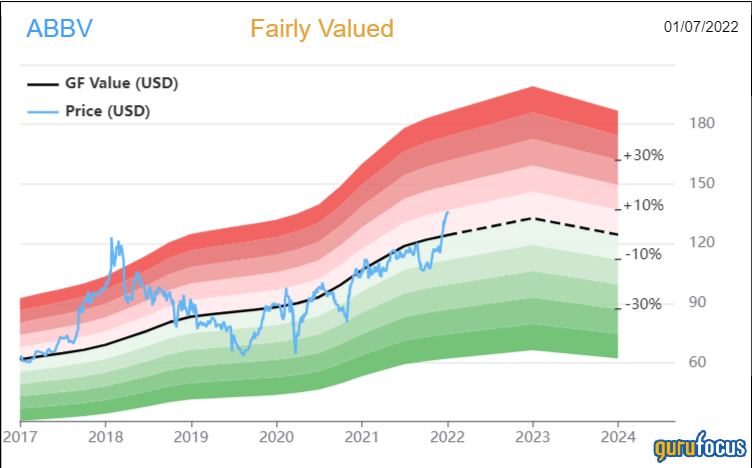 The second stock on this list is General Dynamics Corp. (

GD, Financial), a leading aerospace and defense contractor. The company operates four business segments, including Technologies, Marine Systems, Combat Systems and Aerospace. General Dynamics has a market capitalization of $59 billion and has annual revenue of close to $38 billion.

General Dynamics is a fairly diversified company, with no segment contributing more than a third of annual revenue. This provides some protection in case a certain division faces difficulty. For example, the company faced extreme weakness in its aerospace business in 2020 as the Covid-19 pandemic impacted aircraft deliveries. The segment fell nearly 18% in 2020. The remaining portions of the company did better and total sales fell just 3.6% for the year.

The good news is that aerospace appears to have troughed as General Dynamics saw a 27% sequential improvement in top-line performance for the segment in its most recent quarter. Future demand for products also seems to have recovered. The book-to-bill ratio for the division was 1.6 in the third quarter. Gulfstream, the company’s private jet business, saw a book-to-bill ratio of 1.7, demonstrating that General Dynamics is having no problem drumming up new business for this segment.

Demand is also rising in the company’s other segments. The company-wide book-to-bill ratio was 1.6 for the quarter and for the first nine months of 2021, nearly double what General Dynamics was seeing in the previous year.

The most recent update noted that the total funded backlog was in excess of $88 billion, an 8.1% increase from the prior year. The unfunded portion of the backlog was $41.5 billion, giving General Dynamics a total potential backlog of close to $130 billion. It would take the company more than three years to work off this amount based on 2020 revenue.

The backlog is likely to continue to grow. Combined with the higher book-to-bill ratio and the 5% increase in defense policy bill that was passed in December, General Dynamics is likely to see higher demand for its products.

General Dynamics has a dividend growth streak of 28 years, with the company providing an 8.2% increase for the May 7, 2021 payment. General Dynamics’ dividend has a CAGR of 9.6% over the last decade. If the company sticks to its traditional schedule, then investors will see their next raise announced in early March. Shares also go ex-dividend on March 13.

General Dynamics yields 2.3% at the moment. This is nearly in line with the 10-year average yield of 2.4%. The company has a projected payout ratio of 41% for 2021, ahead of its long-term average payout ratio of 33% but still in a very safe range. 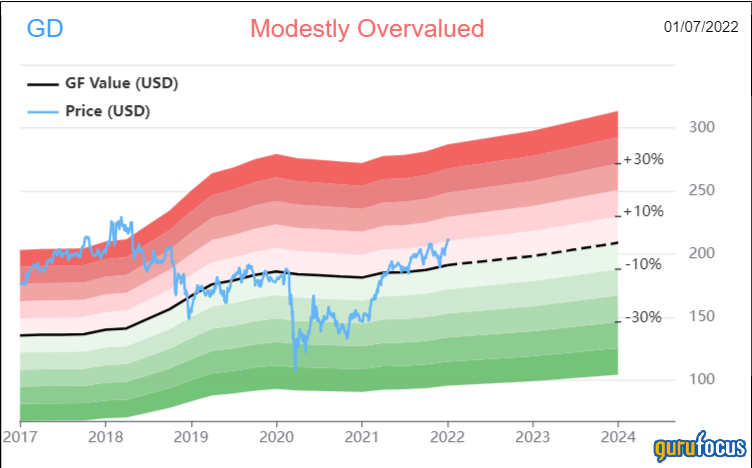 Last up is Lowe’s Companies Inc. (

LOW, Financial), one of the largest home improvement stores in North America. The company has annual revenue of close to $90 billion and is valued at $175 billion.

Lowe’s has a massive foot print, with more than 2,200 stores in the U.S. and Canada. The company is estimated to see 18 million customers walk through its doors each week.

The company’s leading position in its industry gives Lowe’s the ability to attract top brands to its stores. Companies that sell home improvement equipment want their products available to as many customers as possible. Given Lowe’s reach, it is not surprising the company has its stores stocked with the brands that professional contractors and do-it-yourself customers want. This gives Lowe’s pricing power, allowing it to keep prices low while not sacrificing margins.

HD, Financial) in this area. Home Depot’s net profit margin has been mostly in the high single-digits to low double-digits over the last decade. On the other hand, Lowe’s profit margin was below 6% for much of this same period. Only recently has this metric seen a rise.

Value Line expects Lowe’s to have a profit margin of 8.6% for fiscal year 2021, which is double what the company saw 10 years ago. This is an impressive expansion of profitability that shows the company’s focus on raising its margins has largely paid off. That said, the expected ratio still trails Home Depot’s in this area, as Lowe’s expected net profit margin is still more than 200 basis points below its main competitor. That said, the company has focused on raising its profitability over the past several years and has already seen the fruits of that drive pay off.

Lowe’s performed very well during the worst of the Covid-19 pandemic as customers were flush with cash thanks to multiple rounds of stimulus money from the federal government. Rising housing prices nearly everywhere in the U.S. has led to demand from customers to update their homes to maximize value. As a result, comparable sales grew 27% in fiscal 2020.

Demand for products hasn’t ceased just because stimulus money has stopped. U.S. comparable sales grew 2.6% in the most recent quarter, which follows a 30.4% same-store sales figure in the third quarter of 2020. The fact Lowe’s didn’t see even a modest decline in year-over-year comparable numbers shows that customers are still spending heavily at stores.

At 59 years, Lowe’s dividend growth streak is one of the longest in the entire market. The company also qualifies as a Dividend King as a result. Lowe’s raised its dividend by 33% for the Aug. 4, 2021 payment. The most recent raise is considerably higher than the dividend’s CAGR of 18% for the last 10 years. Investors looking to receive the next dividend payment will need to own the stock prior to the Jan. 18 ex-dividend date.

Despite the sizeable recent increase, Lowe’s yields just 1.3%, which is marginally higher than the market index. Today’s yield is also lower than the average yield of 1.8% since 2011. The lower-than-usual yield can be explained in part by the stock’s 58% return over the last year. The company has a projected payout ratio of 24%, lower than the long-term average payout ratio of 33%.

GuruFocus believes the stock to be trading at a meaningful premium to its intrinsic value. 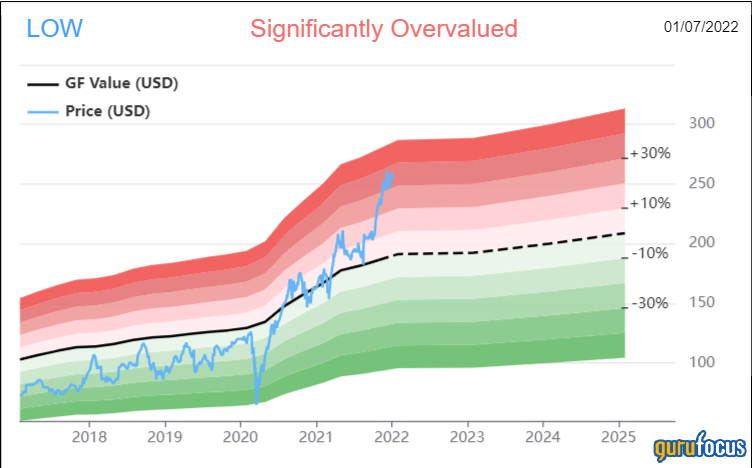 The Dividend Aristocrats are full of high-quality names with long histories of rising dividends. AbbVie, General Dynamics and Lowe’s are three such examples. Each company has a leading position in its respective industry that has allowed for multiple decades of dividend growth.

Of these three, only AbbVie trades at a discount to its historical earnings multiple and none of the names are below their GF Values. That said, quality companies are often trading with a premium valuation because of their successful business models.

The performance of these three names over long periods of time, plus their industry dominance, suggests investors looking for safe, market-beating dividend yields should consider AbbVie, General Dynamics and Lowe’s.