A look at 3 names trading at discounts to their GF values that yield at least 4%. 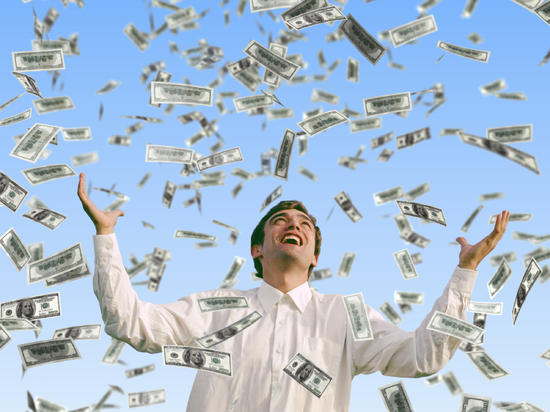 The S&P 500 Index yields just 1.25% as of yesterday’s close, making it hard to find safe sources of income. Finding value can also be difficult with the index close to all-time highs.

There are, however, still a few stocks offering high yields that seem to be undervalued based on certain metrics. In this article, we will examine three stocks trading below their GuruFocus values that offer safe, high yields that are at least three times what the market index is providing.

LEG, Financial), a manufacturer of engineered products such as store fixtures, bedding components and residential and office furniture. The company is valued at $5.6 billion and generated annual revenue in excess of $4 billion in its last reported full fiscal year.

The company’s dividend has a compound annual growth rate (CAGR) of 4.5% over the last decade. While dividend growth hasn’t been especially high, the stock does yield 4% today, which is more than three times the average yield of the S&P 500 Index. Today’s yield is also above the stock’s 10-year average yield of 3.7%.

The dividend does appear to be quite sustainable. Shareholders received $1.64 of dividends per share last year. The company is expected to distribute at least $1.68 of dividends per share in 2022. According to Wall Street, Leggett & Platt is expected to produce earnings per share of $2.74 for 2021 and $3.04 for 2022, giving the company payout ratios of 60% and 55% for 2021 and 2022, respectively. Excluding the artificially high payout ratio in 2011, the average payout ratio over the last decade is 64%, so the dividend looks to be very well covered.

The same is true when looking at the GF Value chart. 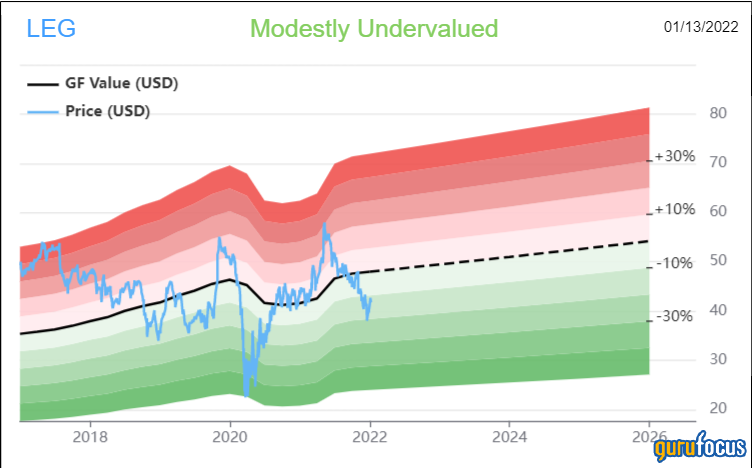 Leggett & Platt has a GF Value of $48.02, resulting in a price-to-GF-Value ratio of 0.87. Reaching the GF Value level would result in a 15% return in the share price. Combined with the dividend, total returns could extend into the high-teens. The stock is rated as modestly undervalued by GuruFocus.

The next name for consideration is National Retail Properties Inc. (

NNN, Financial), a real estate investment trust (REIT) that specialize in owning single-tenant retail properties. The REIT owns close to 3,000 such properties in the U.S., with tenants from industries such as restaurants, wholesale clubs, fitness centers and convenience store. National Retail sees annual revenue of $661 million and is valued at $8.3 billion.

Looking at the GF Value, however, the stock looks to be trading at a slight discount to its fair value. 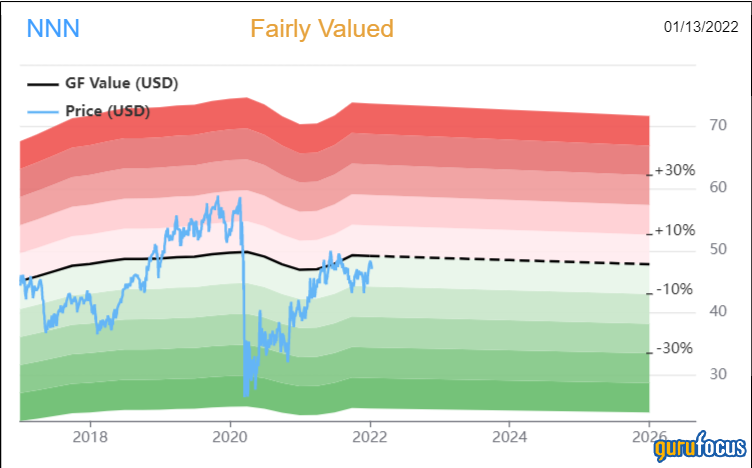 National Retail has a GF Value of $49.17, resulting in a price-to-GF-Value ratio of 0.95. Meeting the GF Value would give shareholders a 4.7% return. Not the most impressive gain in share price, but the total return potential stretches into the high single-digits when factoring in the dividend yield. Shares are rated as fairly valued.

The last stock on this list is Northwest Natural Holding Co. (

NWN, Financial), which distributes natural gas to customers in the Pacific Northwest. From very humble beginnings, the company has transformed into a regional supplier of natural gas to more than 2.5 million people in Oregon and southwest Washington. The company also has a water and wastewater business serving 67,000 people in Oregon, Texas, Utah and Washington. Northwest Natural is valued at $1.5 billion and has annual revenue of $774 million.

Despite its small size, Northwest Natural has an impressive dividend growth streak of 66 years. This is one of the longest in the market and places the company amongst the Dividend Kings, of which there are just 35 total names. Dividend growth has slowed to a crawl in recent years, often with shareholders seeing just a 1 cent raise per year. The dividend’s CAGR is less than 1% since 2011.

The dividend yield is quite generous at 4%, which is 3.2 times what the market index is averaging. The long-term average yield is 3.5%, but the current yield is at a level not seen in some time. The current yield would be the highest since 2015 if it were to be the average for the year.

The likely culprit for the minimal dividend growth is the 10-year average payout ratio of 84%, which doesn’t leave much room for increases.

Northwest Natural trades at $47.82. Using estimates for 2021 and 2022, the stock has forward price-earnings ratios of 18.8 and 18.2, respectively. This compares to the average valuation of close to 21 times earnings over the last decade. 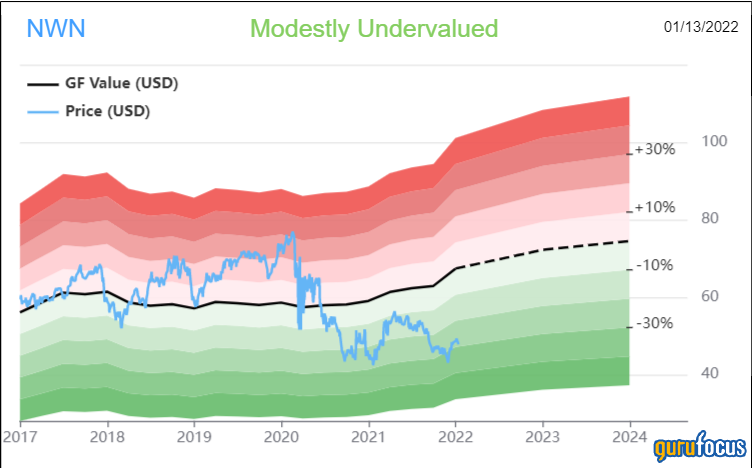 With a GF Value of $67.54, Northwest Natural has a price-to-GF-Value ratio of 0.71. Shares would see a 41% gain by reaching the GF Value before considering the yield. Shares are rated as modestly undervalued.

Value and income can be a highly sought-after combination. Leggett & Platt, National Retail and Northwest Natural are three stocks that have at least three times the yield of the S&P 500 Index and are also trading at a discount to their respective GF values. This suggests that investors looking for income and the possibility of share price appreciation may want to add these stocks to their watchlists.