Are Herron Therapeutics, Cassava Sciences Ripe for a Short Squeeze?

Both companies have high short floats, but lofty target prices

As I pointed out in a previous discussion, short selling is not for the faint of heart and is probably best left to experienced traders. But there is an opportunity for investors to make money by keeping an eye on companies that could be subject to a short squeeze.

To understand this phenomenon, let’s go back to the late 1800s when a legendary speculator said: "He who sells what isn't his'n, must buy it back or go to pris'n."

Of course, they no longer lock up bankrupt short sellers, but the group is required to buy back the shares, thus bringing into play a short squeeze, reports Kiplinger.

Panic buying sets off more panic buying, sometimes pushed by speculators who know the predicament the short sellers are in and want to make them suffer for their lack of confidence in a company. 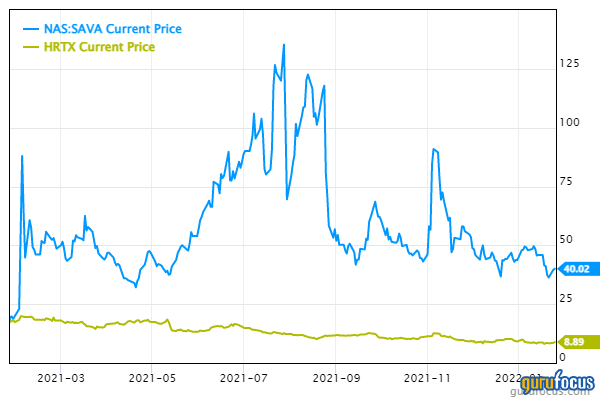 So how can an investor take advantage of the situation? One way is to identify companies with a high percentage of their outstanding shares that are short. Actually, there are two measures of “shortness.” There's the short percentage of the float, which is the percentage of shares available for trading that is currently being held short. Anything above 10% is considered worth a look.

The other useful metric is the short ratio, or days to cover, which Kiplinger says is the number of days of normal trading it would take to generate enough trading volume to buy back all the shares sold short.

Because my area of specialty is health care, let’s take a look at several companies in the industry whose short percentage of the stock’s float is above 20%.

HRTX, Financial) tops the list with 35.96% of its shares short. The San Diego-based biotech is trading at about $8.90, well off its 52-week high of $20.45. What might make the stock ripe for a short squeeze is that of 11 analysts chiming in, all rate it a buy or strong buy. And they assign it an average target price of $31.50, more than 250% higher than where the stock is now.

SAVA, Financial), the Austin, Texas-based biotech with a short float of just more than 34%. The company traded as high as $146 in the past year and the investment professionals think it can do even better than that in the next 12 months. Cassava’s closing price Tuesday was just more than $40.

Analyst sentiment isn’t quite as strong for Intercept Pharmaceuticals Inc. (

ICPT, Financial), which calls New York City home. It’s rated pretty much a hold with an average target price of $30, about double where it trades at now. Short sellers own about 28.5% of the company’s shares.

Other health care stocks with high short floats that investors might want to take a look at includes Esperion Therapeutics Inc. (