This furniture company deserves its place on the Undervalued Predictable screener

To claim a place on the Undervalued Predictable list, one of GuruFocus’ most stringent screeners, a company must meet two criteria: have a business predictability rating of at least four out of five stars and be undervalued based on a discounted cash flow (DCF) analysis. Companies that meet these criteria are considered likely to generate above-average returns for investors, based on historical studies.

LZB, Financial) meets both of the criteria for the Undervalued Predictable screener, which makes it attractive to potential investors - at least on the surface level. However, just like any other screener, there are bound to be some bad stocks mixed in with the good stocks. Which category does La-Z-Boy fall under?

The company is best known for its ubiquitous recliners, but it has a bigger footprint than that. This slide from its November 2021 investor presentation showcases the business categories: 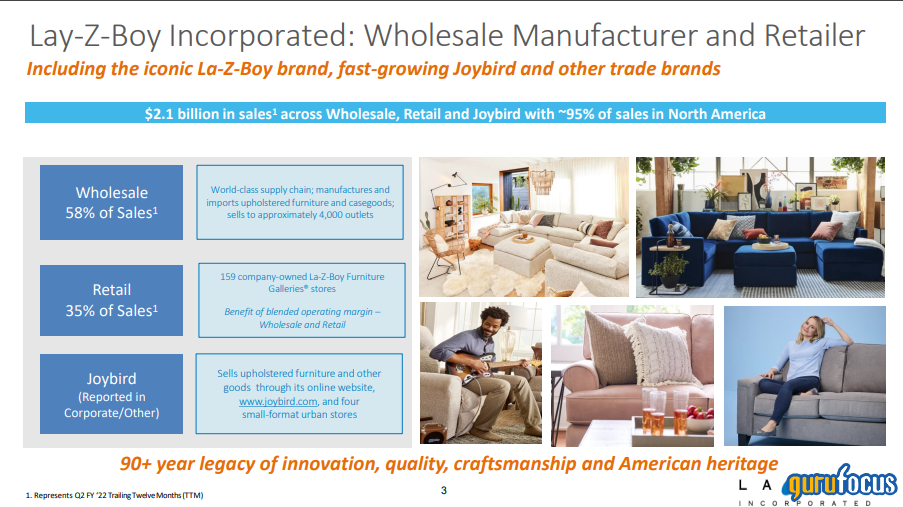 Note in the retail segment, there is a reference to “Benefit of a blended operating margin," which means collecting both wholesale and retail margins on the same product.

As it heads toward its 100th anniversary in 2027, the company operates under this vision: “Sales growth will outpace industry while delivering double-digit operating margins over the long term." It has two sets of plans to achieve that vision.

The first set is for its La-Z-Boy segment, and that involves reinvigorating its core business by telling the “brand comfort story,” increasing its appeal to younger consumers and expanding its omnichannel presence.

The second set is for its Joybird segment; Joybird refers mainly to its online retailing arm and has little physical presence. The plan for this segment involves increasing its floor space and increasing consumer awareness of its online brand.

Because of its strong free cash flow, the company should have the resources it needs for growth. The slide below shows how it plans to allocate the cash flow: 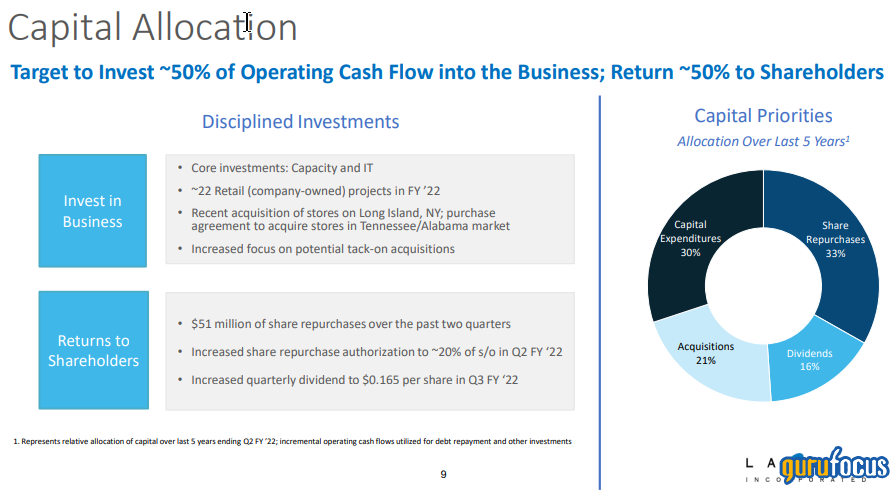 In its 10-K for the fiscal year that ended on April 24, 2021, the company pointed out that the residential furniture business is highly competitive and fragmented. As a result, it competes with many other manufacturers and retailers, including relatively new online challenges from retailers such as Amazon.com (

It added that industry competition is driven by quality, style of products, perceived value, price, service to the customer, promotional activities and advertising.

La-Z-Boy’s margins suggest it is an effective competitor. Its operating margin is 8.27% compared to the 6.62% median of the furnishing, fixtures and appliances industry. Similarly, the net margin outpaces the industry at 6.26% versus 4.79%.

Like all publicly-traded firms, La-Z-Boy faces risks from multiple areas, including: 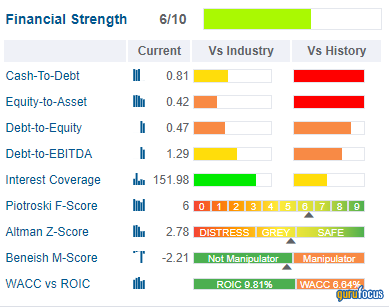 The company receives a middling score of 6 out of 10 for its financial strength, and the first four lines of the table seem to be wildly out of step with the fifth line, which shows interest coverage. Very high interest coverage stands as a counterpoint to having more debt than cash.

That’s because La-Z-Boy has no short-term or long-term debt but does have capital lease obligations. That’s not surprising for a company with manufacturing and distribution facilities, as well as brick-and-mortar stores.

One other area of financial strength is free cash flow, which rocketed upward before plunging down again in recent quarters: 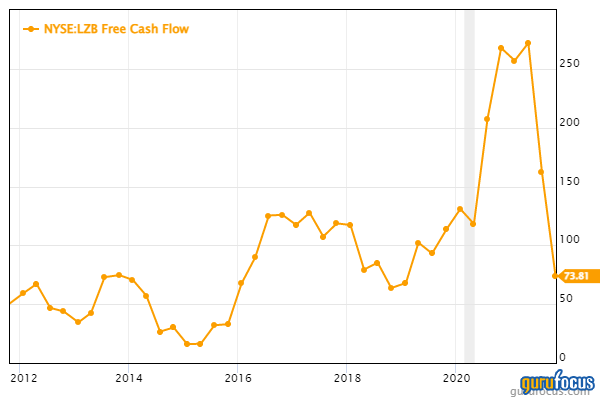 As noted above, the company allocates half of its free cash flow to growth and half to shareholder returns (dividends and share buybacks). 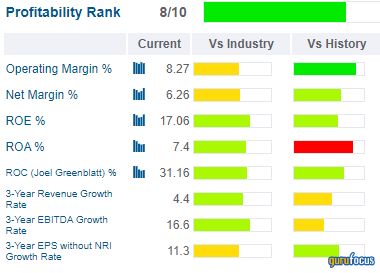 The company receives a strong score of 8 out of 10 for its profitability, even though none of its metrics leave competitors and peers in its dust.

Still, both its operating and net margins are better than the industry averages. Return on equity and return on assets also compare well to the industry, as do two of the three growth metrics.

Most importantly, perhaps, Ebitda and earnings per share have grown faster than revenue, indicating management is using capital well to create additional value.

Despite the strengths we’ve seen so far, La-Z-Boy's stock price has lagged many other companies in the furnishings, fixtures and appliances industry recently, including Sleep Number ( 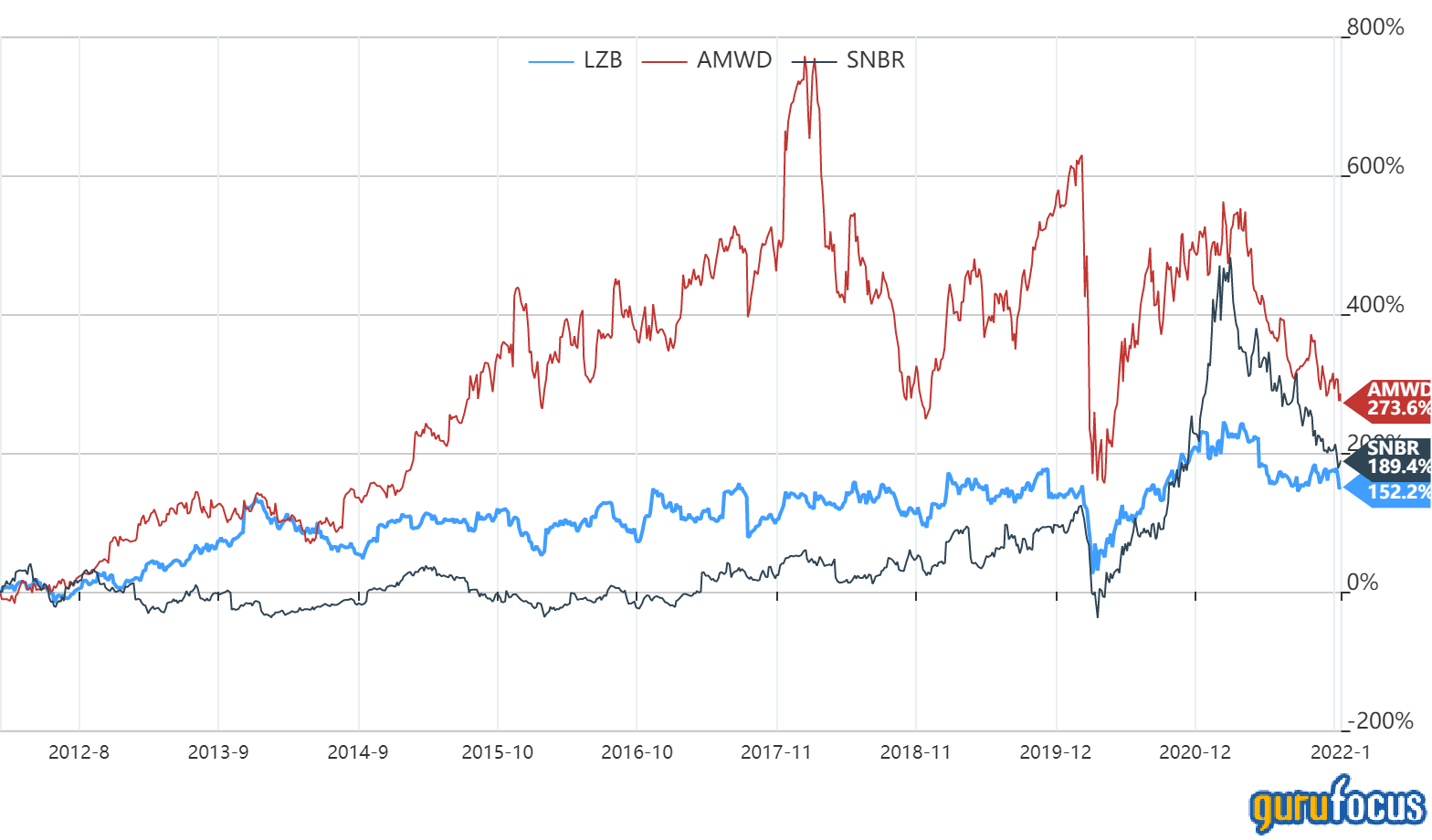 Given American Woodmark’s dominance through at least the middle years of the past decade, should we consider it rather than La-Z-Boy? I don't think so. As the following table shows, the manufacturer and distributor of kitchen cabinets and vanities has had trouble keeping up with La-Z-Boy lately in terms of returns:

In the third quarter of calendar 2020, La-Z-Boy cut its dividend in half, from $0.14 per quarter to $0.07 per quarter. After one quarter, the dividend returned to its previous level, and a few quarters later it had grown to $0.165 per quarter. Other than the dip in 2020, the dividend has grown relatively consistently since being established in 2013.

The table above shows negative dividend growth, but that’s a three-year figure, taking in the 50% cut in 2020. Since then, the company has returned to positive growth.

The following chart shows how La-Z-Boy has repurchased shares since April 2014 (the chart ends on April 24, 2021): 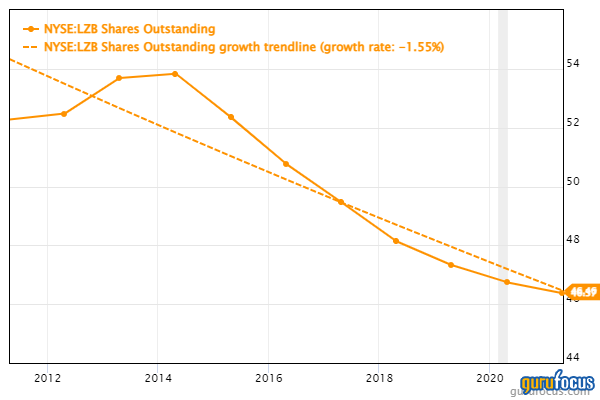 Institutional investors own three-quarters of the existing shares:

Until January 2021, the share price had risen relatively steadily. A few months ago, the price dropped dramatically and has remained depressed since then: 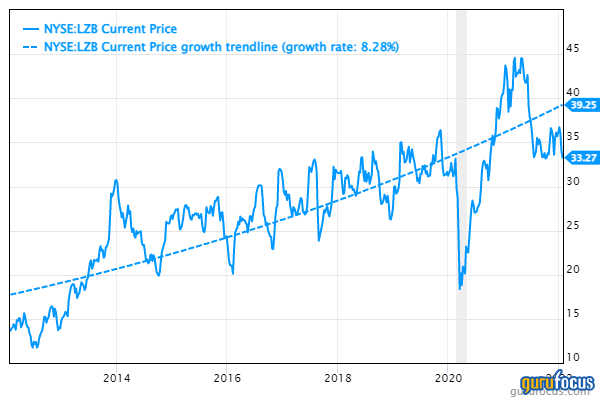 Because of that drop and subsequent stall, La-Z-Boy has an attractive valuation: 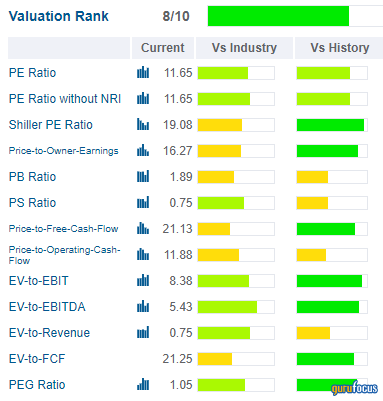 The undervaluation component of the Undervalued Predictable screener uses a discounted cash flow basis, either earnings-based or free cash flow-based. In this case, GuruFocus recommends the earnings approach: 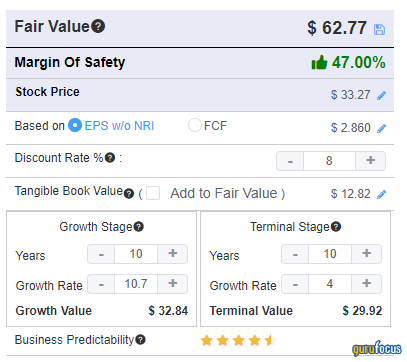 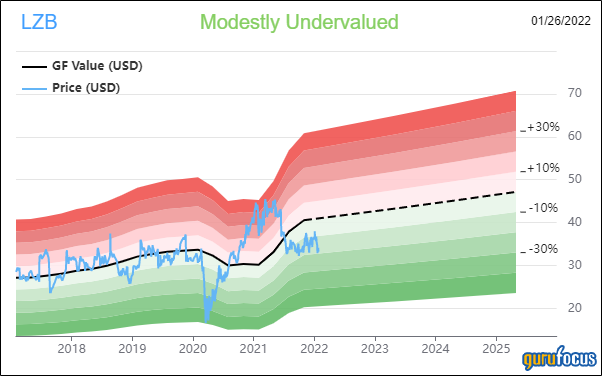 The price-earnings ratio is 11.65, significantly lower than the industry median of 17.46.

The same holds for the PEG ratio of 1.05, which suggests fair valuation rather than undervalued (the fairly-valued mark is 1.00). That’s based on a five-year average Ebitda growth rate of 11.10% per year.

Overall, it seems reasonable to classify the company as undervalued.

The investing giants followed by GuruFocus were net buyers of La-Z-Boy stock in the most recent quarter:

Eight gurus owned stock at the end of the third quarter of 2021 The three largest positions belonged to:

Looking beyond the immediate criteria for an Undervalued Predictable stock - a low valuation and predictable returns - I see a stock with a lot of positives and few negatives.

Despite a modest rating for financial strength, it has no short or long-term debt and has ample free cash flow. It is profitable and its margins are outperforming the majority of its peers and competitors. Rewards are flowing to shareholders through dividends and share buybacks, although its share price is in the doldrums.

Given its debt-free status and undervaluation, I'd say La-Z-Boy deserves the attention of value investors, and its growing dividend may attract income investors.