Karuna Therapeutics' Schizophrenia Drug Could Be a Blockbuster

KRTX, Financial), which was one of the potential takeover targets I discussed last week.

The Boston-based clinical-stage biopharmaceutical company certainly gains points based on its name, which in Sanskrit means compassion or mercy. That’s fitting given the company seeks to improve the lives of people with debilitating psychiatric and neurological conditions, including schizophrenia and Alzheimer’s.

Part of what makes Karuna an intriguing investment opportunity is its novel approach to treating these conditions. On a recent episode of "Mad Money," Dr. Steve Paul, chairman, president and CEO of Karuna, explained that while there are several medications for schizophrenia, they're dated, having been developed in the mid-20th century, and all have substantial side effects.

Karuna is attacking the problem from a different angle. The drugs being tested by the company aren’t aimed at slowing the advancement of schizophrenia or reversing it, but treating the incapacitating symptoms of hallucinations, delusions and agitation. These are responsible for most of the hospitalizations and often suicides in patients.

If Karuna is successful, its drug would offer relief to a large patient population. According to the World Health Organization, schizophrenia affects approximately 24 million people, or one in 300 people (0.32%), worldwide.

The company currently has four phase 3 trials for KarXT underway and expects the first results to be available by the the middle of the year. 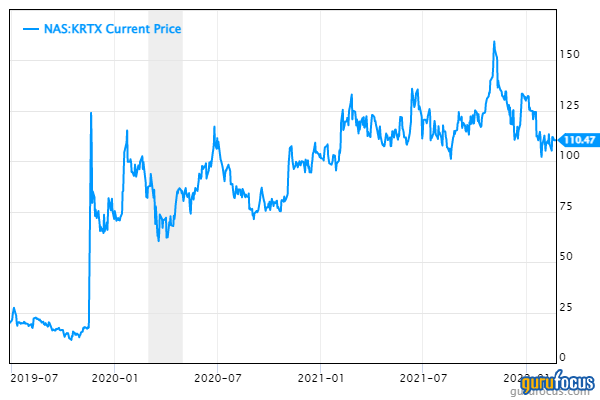 "If successful, we believe KarXT could generate more than $1 billion in U.S. schizophrenia sales," wrote analyst Paul Matteis of Stifel, according to an article in Kiplinger’s, in which Karuna was included in the list of 12 “Super Small-Cap Stocks to Buy for 2022 and Beyond.”

"Beyond schizophrenia psychosis, Karuna is also planning on developing KarXT in schizophrenia cognitive and negative symptoms, as well as in Alzheimer's disease psychosis and pain," Matteis said. Oppenheimer analyst Jay Olson is equally optimistic, noting that KarXT could offer a huge advantage over current antipsychotics.

Of the 16 analysts who rated Karuna in January, Yahoo Finance reported the opinions are evenly split between buy and strong buy, with a high target price of $200 and an average of $175.

The company reported a net loss of $50.9 million for the third quarter of 2021, as compared to $18.8 million for the prior year comparable period. It said the higher net loss was due to greater research and development expenses for clinical trials. Karuna finished the quarter with nearly $500 million in cash, cash equivalents and available-for-sale investments.