The former protégé of

Seth Klarman (Trades, Portfolio) takes a fundamental, value-oriented approach to stock picking, investing in a fairly concentrated number of securities. His Boston-based firm seeks to identify long-term opportunities among a wide variety of asset types in both foreign and domestic markets. He also prefers companies in which the CEO has a significant stake, or where the executive’s salary is primarily stock-based.

Keeping these criteria in mind, the guru boosted his stake in Coupang Inc. (

The investor increased the Coupang (

CPNG, Financial) stake by 119.62%, buying 5.28 million shares. The transaction had an impact of 3.4% on the equity portfolio. The stock traded for an average price of $28.18 per share during the quarter.

Abrams now holds 9.7 million shares total, accounting for 6.25% of the equity portfolio. It is now his eighth-largest holding. GuruFocus estimates he has lost 29.65% on the investment so far.

The stock, which began trading in the U.S. market last March, has tumbled over 50% since then. 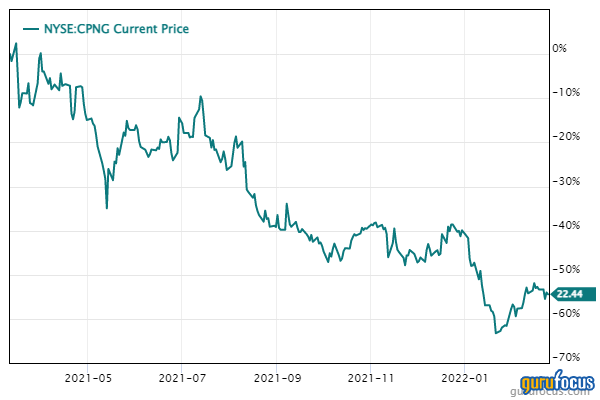 GuruFocus rated Coupang’s financial strength 7 out of 10, driven by a high Altman Z-Score of 4.71 that indicates it is in good standing.

The company’s profitability did not fare as well, scoring a 1 out of 10 rating on the back of negative margins and returns on equity, assets and capital that underperform a majority of competitors.

Of the gurus invested in Coupang,

With an impact of -1.6% on the equity portfolio, Abrams curbed his Amerco (

He now holds 447,978 shares total, which represent 7.14% of the equity portfolio and is his seventh-largest holding. GuruFocus data shows Abrams has gained an estimated 63% on the investment, which was established in the fourth quarter of 2016.

The Reno, Nevada-based company, which owns rental truck operator U-Haul, has a market cap of $11.08 billion; its shares were trading around $568.34 on Thursday with a price-earnings ratio of 9.98, a price-book ratio of 1.9 and a price-sales ratio of 1.98. 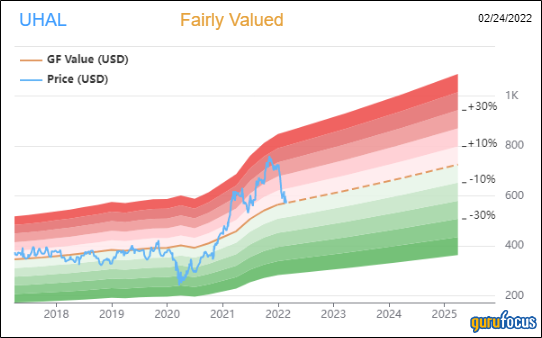 Amerco’s financial strength was rated 5 out of 10 by GuruFocus. Despite issuing approximately $1.3 billion in new long-term debt over the past three years, it is at a manageable level due to adequate interest coverage. The low Altman Z-Score of 1.88, however, indicates it is under some pressure since assets are building up at a faster rate than revenue is growing. The return on invested capital also overshadows the weighted average cost of capital, indicating value creation in occurring as the company grows.

The company’s profitability scored a 9 out of 10 rating. Although the operating margin is declining, it is supported by returns that outperform over half of its industry peers. Amerco also has a high Piotroski F-Score of 8 out of 9, which suggests business conditions are healthy, while consistent earnings and revenue growth contributed to a predictability rank of 3.5 out of five stars. According to GuruFocus, companies with this rank return an average of 9.3% annually over a 10-year period.

Impacting the equity portfolio by -0.13%, the guru trimmed the Willis Towers Watson (

Abrams now holds 1.06 million shares total, which make up 5.57% of the equity portfolio and is his ninth-largest holding. Since the fourth quarter of 2016, the firm has gained around 67.32% on the investment.

The insurance brokerage company, which is headquartered in London, has a $26.27 billion market cap; its shares were trading around $215.22 on Thursday with a price-earnings ratio of 6.48, a price-book ratio of 1.99 and a price-sales ratio of 2.9. 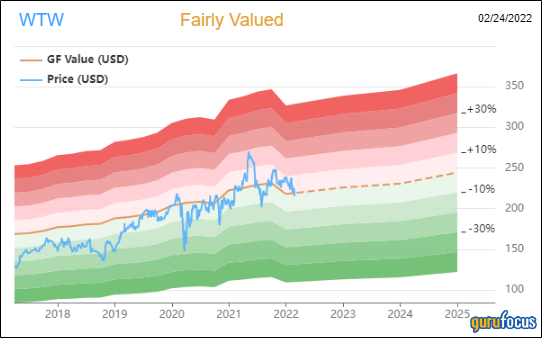 GuruFocus rated Willis Towers Watson’s financial strength 6 out of 10. Although the company has sufficient interest coverage, the low Altman Z-Score of 1.63 warns it could be at risk of bankruptcy since revenue per share had declined recently. The ROIC also exceeds the WACC, indicating value is being created.

The company’s profitability scored a 7 out of 10 rating, driven by operating margin expansion and strong returns that top a majority of competitors. Willis Towers Watson also has a high Piotroski F-Score of 7 as well as a one-star predictability rank. GuruFocus data shows companies with this rank return, on average, 1.1% annually.

Abrams did not make any other changes to his holdings. As of Dec. 31, his five largest positions are Lithia Motors Inc. (

Nearly 40% of the guru’s $4.56 billion equity portfolio, which is composed of 18 stocks, is invested in the consumer cyclical sector, followed by smaller exposures to the communication services (18.2%) and industrials (14.67%) spaces.