Following a boost in the fourth quarter, Glenview Capital Management’s

Striving to deliver attractive absolute returns, the guru’s New York-based hedge fund focuses on deep fundamental research and individual security selection. It operates the Glenview Fund, which is a long-short strategy, and the Glenview Opportunity Fund, which is more concentrated. Most of its investments are in U.S. stocks, but it does have some exposure to Western Europe as well.

According to GuruFocus Real-Time Picks, a Premium feature, Robbins invested in 816,991 shares of the Troy, Michigan-based company on Feb. 16, impacting the equity portfolio by 0.44%. The stock traded for an average price of $25.60 per share on the day of the transaction.

The investor now holds 3.5 million shares of Meritor total, accounting for 1.93% of the equity portfolio. GuruFocus estimates he has gained 29.86% on the long-held investment.

The company, which manufactures drivetrain components as well as axle, brake and suspension solutions for military suppliers, trucks and trailers, has a $2.52 billion market cap; its shares were trading around $35.61 on Monday with a price-earnings ratio of 11.59, a price-book ratio of 4.23 and a price-sales ratio of 0.65. 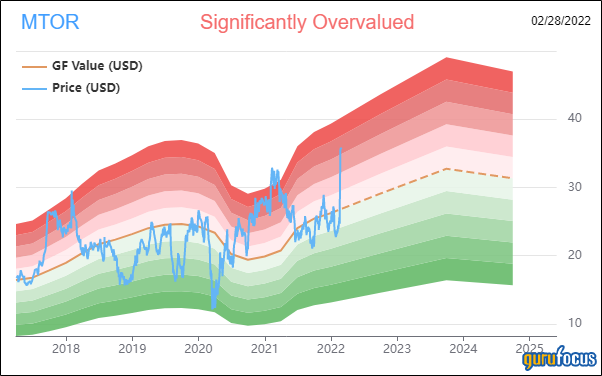 Meritor reported its financial results for the first quarter of fiscal 2022 on Feb. 3, posting earnings of 76 per share on $984 million in revenue. Both metrics were up from the prior-year period. 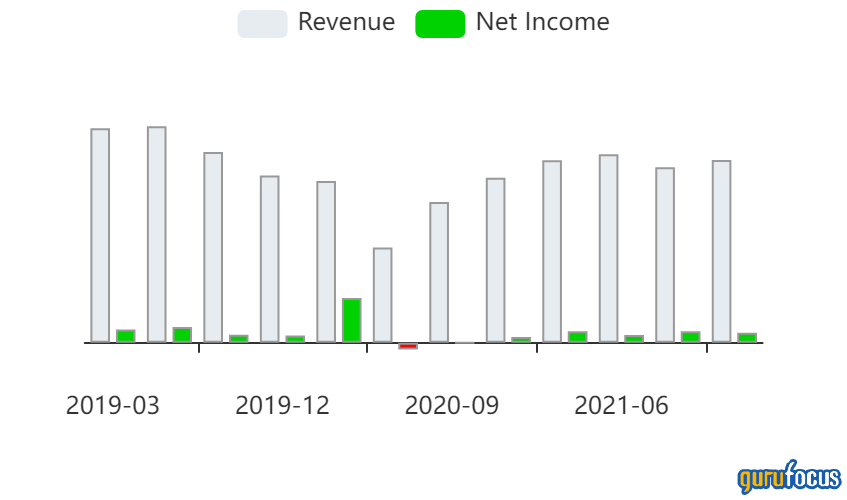 On Feb. 22, the company revealed it is being acquired by Cummins Inc. (

CMI, Financial) in an all-cash deal valued at $3.7 billion. According to the terms of the agreement, the Columbus, Indiana-based manufacturer of diesel engines will pay $36.50 per share for Meritor.

Since Meritor is a leader in axle and brake technology, the companies expect the combination will strengthen Cummins’ position in integrated powertrain solutions across both combustion and electric power applications.

In a statement, Cummins Chairman and CEO Tom Linebarger noted the acquisition is “an important milestone.”

“This acquisition adds products to our components business that are independent of powertrain technology, and by leveraging our global footprint we expect to accelerate the growth in Meritor’s core axle and brake businesses,” he said. “There is also a compelling financial case for this acquisition, with significant synergies expected in SG&A, supply chain operations and facilities optimization.”

By combining the two companies’ strengths, Linebarger said they will be able to “address one of the most critical technology challenges of our age: developing economically viable zero carbon solutions for commercial and industrial applications.”

Chris Villavarayan, the CEO and president of Meritor, also commented on the deal.

“This agreement with Cummins builds on Meritor’s track-record of outstanding performance and service to our customers," he said. "Our offerings will continue to play an important, strategic role as commercial vehicles transform to become electric and autonomous."

The deal is expected to close by the end of the calendar year.

GuruFocus rated Meritor’s financial strength 5 out of 10 on the back of weak interest coverage and a low Altman Z-Score of 2.9, indicating it is under some pressure currently. The return on invested capital is also eclipsed by the weighted average cost of capital, meaning the company is struggling to create value as it grows.

The company’s profitability fared better with a 7 out of 10 rating, driven by an expanding operating margin, strong returns on equity, assets and capital that top a majority of competitors and a moderate Piotroski F-Score of 6, suggesting conditions are typical for a stable company. Meritor also has a predictability rank of one out of five stars that is on watch. According to GuruFocus, companies with this rank return an average of 1.1% annually over a 10-year period.

Of the gurus invested in Meritor, Robbins has the largest stake with 5.01% of its outstanding shares. Hotchkis & Wiley,

Nearly 60% of Robbins’ $4.69 billion equity portfolio is invested in the health care space as of Dec. 31, with all other sectors having much smaller representations.