BIIB, Financial) beleaguered Alzheimer’s drug and along with it the company’s battered stock price? The Cambridge, Massachusetts-based biotech and its shareholders certainly hope so.

Biogen’s shares have traded as high as $468 in the past year based on high hopes for its Alzheimer’s treatment, but have cratered about 58% since then. In all fairness, the Nasdaq Biotechnology Index has suffered too, dropping 23% over the same period.

Aduhelm, which received the Food and Drug Administration's approval last June, has run into a myriad of problems, foremost of which is Medicare’s January decision to limit payment for only patients enrolled in years-long government studies. That was a devastating blow to the market potential for the medication.

Patient advocacy groups are now fighting to have the U.S. government loosen the proposed restrictions, spending millions of dollars on television and local advertising. The backers point to the fact that Aduhelm is the first treatment for Alzheimer’s to be approved in 20 years. The government's decision would also likely impact the plaque-clearing drugs in late-stage development by Eli Lilly and Co. ( 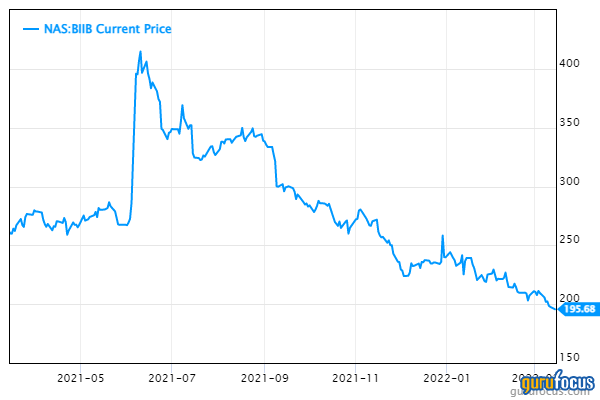 USAgainstAlzheimer's, one of the biggest U.S.-based groups representing patients with the disease, said it’s flooding the Washington D.C. and Baltimore areas with messages aimed at the Centers for Medicare and Medicaid Services, the Department of Health and Human Services, the White House and Congress, reported Reuters.

"We want to put a face on the individuals that are affected by this Medicare decision," USAgainstAlzheimer's Chairman George Vradenburg said. "We tend to talk about big numbers. We don't talk about individual people."

The group’s ads focus on Alzheimer’s patients with the tag line "Alzheimer's patients can't wait." Thousands of patients and doctors have already bombarded the Medicare agency with letters, echoing the companies’ assertions that patients should not be cut off from the new drugs once they have been approved. At the same time, many comments praised Medicare for putting curbs on Aduhelm's use.

The price of Aduhelm was cut in December to $28,200 from $56,000 per year, but the amount still raised concerns about the cost to Medicare since Alzheimer’s primarily affects the elderly, about 85% of whom are covered by the government plan.

The magnitude of the problem—and associated costs—are illustrated by the growing incidence of Alzheimer’s. About 6 million Americans are currently affected by the disease, a number expected to explode to 13 million by 2050.

Biogen has estimated that around 1 million should be eligible for Aduhelm, which is approved for people in the early stages of illness.