Which Way Will PayPal Go? 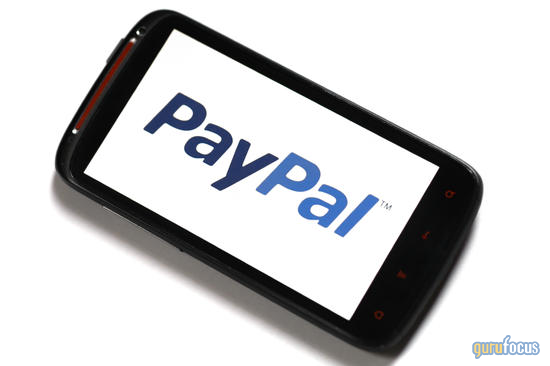 PYPL, Financial) prospects for the near term, though the long-term consensus remains positive.

Many see the company in decline. For example, in a piece headlined “Post 65% Decline, What’s Ahead for PayPal Stock?” TipRanks noted, “Given the recent sell-off, PayPal stock has witnessed a massive erosion in its value, dropping more than 65% in the past six months. Meanwhile, it has fallen about 49% this year alone and is trading below the $100 mark.”

Others, however, see the international money transfer system in a more positive light. For instance, Seeking Alpha columnist The Asian Investor pointed out that PayPal “especially is an attractive stock to consider right now. The fintech is going to continue to expand its payment ecosystem, adding new products and services, and the stock has simply become too cheap from a free cash flow perspective.”

The stock’s performance lagged behind that of several of its competitors on Monday, including Visa Inc. (

V, Financial), Mastercard Inc. (MA, Financial) and American Express Co. (AXP, Financial). Shortly before midday on Tuesday, PayPal’s shares were trading at about $97.77, up about 0.86%. 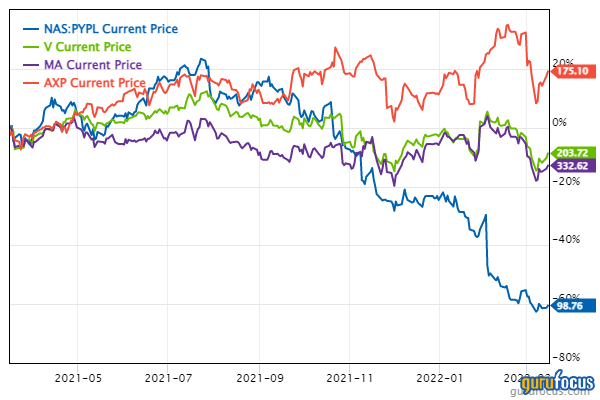 There is no doubt that PayPal’s business was negatively impacted by a variety of factors, including the Covid-19 pandemic, slower growth of e-commerce in general, supply chain issues and a less than energetic labor market. In addition, eBay Inc.’s (

Bank of America Securities analyst Jason Kupferberg is less than hopeful about a PayPal share price recovery in the short term. As he recently wrote, 2022 can be viewed as a transitional period for the company. As a result, he reportedly downgraded the stock from buy to hold and cut its price target to $107 from $175.

“In hindsight, the company overestimated the sustainability of tailwinds induced by the pandemic and related stimulus, but we believe PayPal retains a robust competitive footprint,” Kupferberg wrote in a research note. “Plus, the company has a formidable balance sheet with $7 billion of net cash as of 12/31/21.” He also took time suggest that PayPal hire a new chief operating officer, a position that has been vacant since Bill Ready left the company in 2019.

During a recent conference call, PayPal Chief Financial Officer John Rainey suggested the company is “pivoting towards a higher ROI, or return on investment initiative, which is really around trying to retain high-quality users.”

There appears to be somewhat of a consensus that while PayPal's stock faces a variety of challenges in the near future, its commanding presence in the digital payments sector, combined with the growth of the so-called “buy now, pay later” sector, last year’s deal that lets users of its Venmo wallet use it on both Amazon.com Inc.’s (

AMZN, Financial) massive marketplace and the Amazon shopping app in the U.S., and the introductions of new products, all augur well for the company over the long haul.