The conglomerate managed by the Tisch family continues to be undervalued

L, Financial) is a diversified holding company with businesses in the insurance, energy, lodging and packaging industries. Consolidated subsidiaries include CNA Financial, Boardwalk Pipelines, Loews Hotels and Altium Packaging. The company, which has been managed by the Tisch family since its founding in 1946, has traditionally focused on long-term value creation for its shareholders as well as conservative financial management.

The multi-industry holding company structure is a key factor in Loews' ability to create value. This structure provides it with the flexibility to make investments across a broad spectrum of industries whenever the the opportunity exists to enhance returns to our shareholders.

Loews has been public since 1961and currently has a $16.2 billion market capitalization.

Let's now take a bit of a closer look at the company's different subsidiaries to understand what kind of businesses it is involved in.

CNA, Financial), a large property and casualty insurance company with a $13.3 billion market cap and $8.3 billion in earned premiums.

The company also owns 100% of Boardwalk Pipelines, a natural gas and NGL midstream pipeline company based in Houston. Boardwalk is privately held by Loews.

Next is Loews Hotels. Loews owns 100% of its namesake hotel operator with 26 properties either owned 100% directly, owned as part of a joint venture or managed on behalf of other owners.

Finally, Loews owns 53% of Altium Packaging, a privately held manufacturer of rigid plastic packaging with over $1.2 billion in net sales.

For the year, revenue increased 16.4% to $14.6 billion, driven by a 9.5% increase in revenue from CNA and positive gains from investment income. The investment income gain was largely driven by the deconsolidation of Altium, in which they sold 47% of their total holdings, resulting in a gain of $555 million.

Net income was $1.58 billion for 2021, which rebounded from a large loss in 2020 related to the bankruptcy filing and deconsolidation of former subsidiary Diamond Offshore. CNA earnings represented 63.8% of total net income for the year. Loews Hotels reported a loss over the past two years due to the ongoing effects of the Covid-19 pandemic. 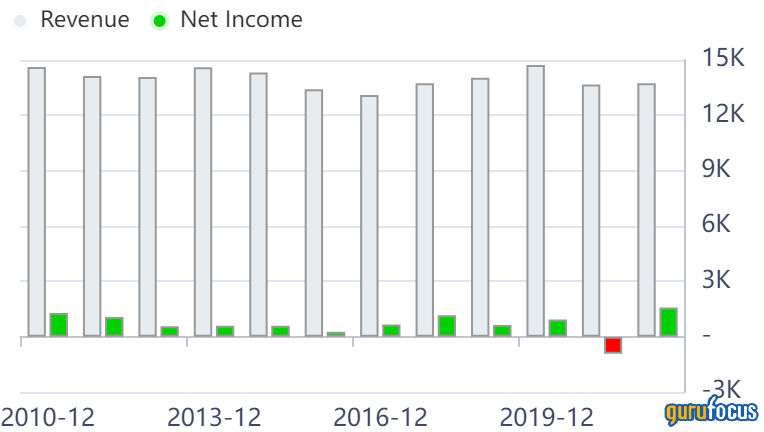 The company has a very liquid balance sheet and cash and investments totaled $3.45 billion at year-end. This was comprised of $2.65 billion cash equivalents and the remainder in equity securities or limited partnership investments.

Loews has been an active repurchaser of its own shares in recent years and, in some ways, the company has been executing a slow-motion scheme to go private. Shares outstanding have been reduced from 332 million in 2017 to 248 million today. Most of these purchases have occurred when the stock has been below book value, which is a prudent and meaningful allocation of capital. 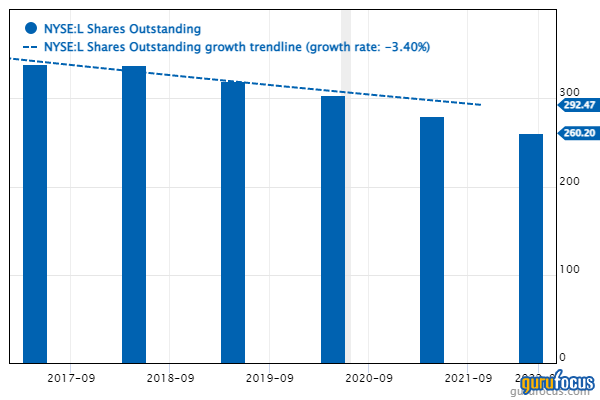 On a sum-of-the-parts basis, Loews appears to be undervalued. The company’s current stake in CNA is worth $12 billion based on current stock prices, yet Loews' market cap is $16.3 billion. When considering the net cash position of $1.1 billion, the market is valuing all of the company’s subsidiaries at only $3.2 billion. Boardwalk Pipelines alone has $843 billion in Ebitda and the value of the hotel properties is in the billions. Altium has approximately $1.2 billion in sales. 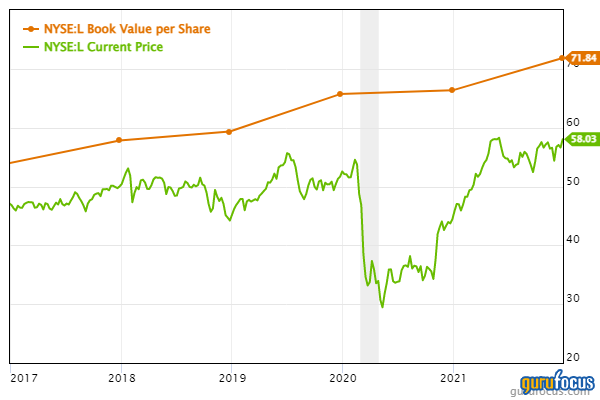 Gurus who have added to Loews positions lately include

I believe Loews is undervalued at this time as it still trades below book value. The management's focus on long-term, value-oriented investments combined with steady share buybacks should create shareholder value over time. The discount is also present when using a real-time sum-of-the-parts value methodology as the largest holding is publicly traded.