This telecom company is misunderstood and highly undervalued

David Dreman (Trades, Portfolio), a well-known practioner of contrarian investing (and who wrote a couple of books on the subject), once said, "The success of contrarian strategies requires you at times to go against gut reactions, the prevailing beliefs in the marketplace, and the experts you respect. It’s very hard to go against the crowd. Even if you’ve done it most of your life, it still jolts you. Favored stocks underperform the market, while out-of-favor companies outperform the market, but the reappraisal often happens slowly, even glacially."

Today I am writing about Liberty Latin America Ltd. (

LILA, Financial)(LILAK, Financial)(LILAB, Financial), an out-of-favor stock in an out-of-favor sector. The stock has many strikes against it. It has been falling for several years, so shareholders are discouraged. The company also produces no profit, pays no dividend and operates mostly in the Caribbean and Latin America (great places for a vacation, but stocks? Not so much.) .

The telecommunications company has operations in Chile, Puerto Rico, the Caribbean and other parts of Latin America. The communications and entertainment products that it offers to residential and business customers include video, broadband internet, telephony and mobile services. In most of its operating footprint, it offers a "triple-play" of bundled services of digital video, internet and telephone in one subscription. It is also bundling, where available, mobile offerings with the "tripe-play" products to offer a "quad-play," or fixed-mobile convergence service. Available fixed service offerings depend on the bandwidth capacity of a particular fixed system and whether it has been upgraded for two-way communication. Its brands include C&W Business, BTC Everyday, FLOW, Tmovil, vtr.com and Liberty Puerto Rico.

Insiders own 29.8% of the common stock. Liberty Latin America was launched as tracking stock by Liberty Global in July 2015 and, eventually, was split off from Liberty Global (

LBTYA, Financial) in 2017. Michael Fries is the chairman and Balan Nair the president and CEO. Founder John Malone controls the company through super-voting B shares. Over the past couple of years, it has completed numerous acquisitions, including the mobile business of AT&T (T, Financial) in Puerto Rico.

Like most of Malone's companies, Liberty Latin America is highly leveraged. Below is snapshot of the balance sheet. 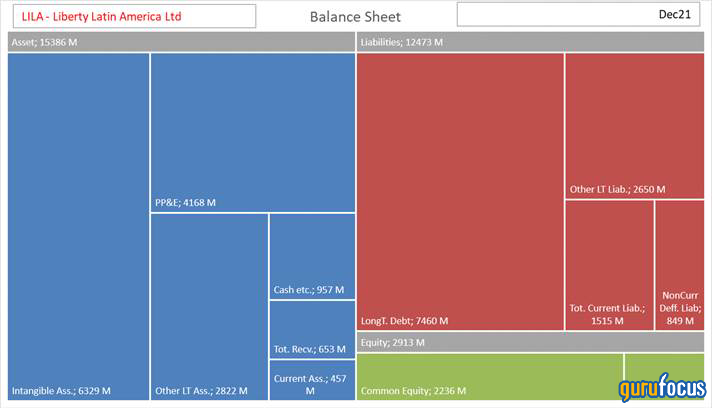 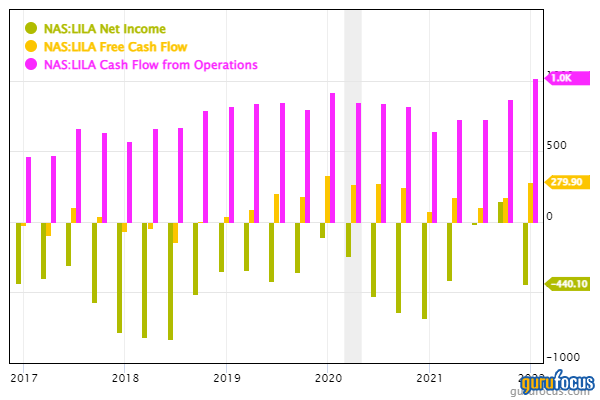 Given Liberty Latin America's strategy of focusing on operating and free cash flow, it makes sense to try to value the stock through a FCF lens. GuruFocus has devised a proprietary metric called projected FCF value to deal with situations where free cash flow is erratic. Essentially, the metric takes 80% of the book value and adds it to the present value of free cash flow averaged over six years. The current projected FCF value is $12.26. I think that is about right, but I expect this number to improve rapidly in the years ahead.

Most of the value buildout is still in the future as Liberty continues to build a fixed mobile converged network in Latin America. Demand for higher bandwidth data and mobile communication continues to increase. Eventually, the area will settle into a oligopoly-like market and all the major players will be producing lots of free cash flow. You can already see that happening in the chart above. Shareholder returns are likely to come from stock buybacks and not dividends.

Liberty Latin America has started buying back shares over the last year and plans to continue doing so.

To some extent, Liberty Latin America is a "bet on the jockey, not the horse" type of stock. It is a classic Malone company that uses an atypical management approach, where valuable assets grow financed as tax as efficiently as possible and use mergers and acquisitions to increase value. Essentially, that means high leverage and focus on cash flows and stock buybacks. The leverage is a feature, not a bug. Sure debt is high, but so is cash flow. Debt management is a core management competency of a Malone company. If the company does get into trouble, it has the potential to cut capital expenditures for the time being to survive.

Overall, I think it is a high uncertainty situation, but that does not mean high risk. I don't think there is a high risk of permanent capital loss. The current low price of the equity is an opportunity for investors with a long time horizon.