2 Risky Picks That Could Pay Off

Despite weak balance sheets, these companies are showing good profitability 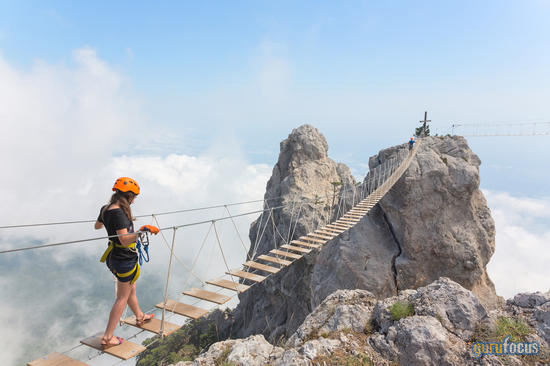 The following stocks have underperformed the broader market recently. They are also in financial distress, as represented by low Altman Z-Scores, meaning that they could go bankrupt within the next several years.

Nonetheless, their ability to generate profits seems to be good, as signaled by GuruFocus profitability ratings of at least 5 out of 10. These stocks also received positive recommendation ratings on Wall Street, which means sell-side analysts believe these companies have the potential to continue growing their stock prices, though investors should be on guard in case things start to get worse.

The first stock to consider is Darden Restaurants Inc. (

An Altman Z-Score of 2.42 combined with a debt-equity ratio of 2.08 (versus the industry median of 1.11) suggests the company is struggling financially, while the risk of bankruptcy cannot be entirely ruled out.

Sell-side analysts have established an average target price of $157.33 per share, which represents 24.44% upside from Friday’s closing price of $126.43 per share. On Wall Street, the stock has a median recommendation rating of overweight.

Darden Restaurants will pay quarterly dividends with the next payout of $1.10 per common share on May 2. The stock has a forward dividend yield of 3.45% as of April 8.

The progressive improvement in the number of Covid cases is causing customers to flock to restaurants more and more, giving positive momentum to the business.

The second stock to consider is Warner Music Group Corp. (

WMG, Financial), a New York-based music entertainment company with operations in the U.S., the U.K. and internationally.

An Altman Z-Score of 1.98 combined with a debt-to-equity ratio of 27.22 (versus the industry median of 0.32) indicates the company is struggling financially despite not being in troubled areas. Therefore, the probability of bankruptcy is there, but very low.

The share price was $37.30 at close on April 8, which is lower than analysts’ average target price of $44.60, reflecting a 19.6% potential upside. On Wall Street, the stock has a median recommendation rating of overweight.

Warner Music Group pays quarterly dividends. The last payout of 14 cents per common share was issued on March 1. The stock has a forward dividend yield of 1.63% as of April 8. 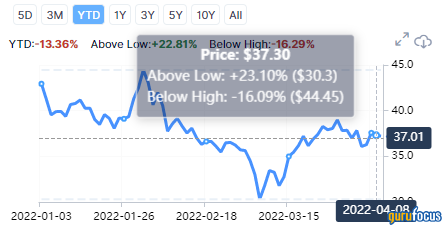 This company has significantly increased its fixed asset purchase allocations over the past 12 months, passing from $125 million in 2020 to $574 million in 2021. This implies an expected robust increase in the demand for audio and video music content in the coming years, which could potentially create a strong tailwind for Warner Music Group's business. The company is expected to grow profits by 70.7% this year, 35.4% next year and 37% annually for the next five years.