Comfort food has made a comeback in recent years during times of trouble as customers are looking for ways to relax and find a dining experience that is familiar and nostalgic. Comfort foods like fried chicken, macaroni and cheese, chicken pot pie and turkey with dressing are increasing their share of menu space across the country. Fried chicken alone appears on 45% of full-service restaurants and 50% of limited-service menus.

CBRL, Financial). The company was established in 1969 in Lebanon, Tennessee and provides a friendly home-away-from-home style in its old country stores and restaurants. The restaurants serve up home-style country food such as meatloaf and homemade chicken and dumplins as well as signature biscuits. The restaurant units also are accompanied by an authentic old country retail store with unique gifts and other classic self-indulgences.

The company reduced or eliminated its dividend payment during various quarters in which the pandemic negatively affected the company operating results.

BH, Financial) is a Berkshire Hathaway (BRK.A, Financial)(BRK.B) style holding company that owns 8.7% of Cracker Barrel. In the past, Biglari and their affiliates have nominated candidates for election to the board of directors at various annual meetings, which has resulted in proxy contests and called publicly for special meetings of shareholders to consider some of their other proposals. In November 2020, Biglari lost its fifth proxy battle against the company. In January of this year, Biglari was fined $1.4 million by the U.S. Federal Trade Commission for its second violation of federal antitrust rules in less than a decade over purchases of Cracker Barrel stock. The company remains an 8.7% shareholder as of the latest proxy statement. 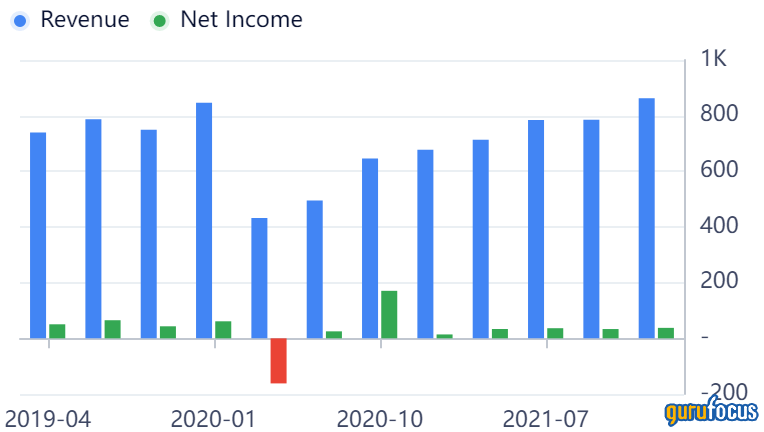 Free cash flow for the six-month period was strong at $78 million. During the period, the company reduced debt by $50 million, repurchased $34.2 million in shares and paid dividends totaling $54.6 million.

Cracker Barrel's biggest input costs are beef (15%), fruits and vegetables (13%), dairy (12%), poultry (12%) and pork (11%). The company purchases its food products from a variety of different vendors on a cost-plus basis. The company has noted higher food inflation is weighing on financial results and mentioned commodity inflation of approximately 15%. Management noted they will raise prices on a steady basis throughout the fourth quarter of this year instead of one large price increase. In addition, Cracker Barrel is still feeling the negative effects of supply chain constraints, which is delaying equipment deliveries and the opening of new restaurants. Lastly, wage inflation is also having an impact and is expected to increase in the 11% to 12% range.

Due do the effects of cost and wage inflation, the company may not be earning up to its true potential this fiscal year. For the year ending July 2022, consensus earnings per share analyst estimates are approximately $7. For the following fiscal year, the estimates are closer to $8 per share. This 17 times current earnings and 15 times forward earnings is roughly in line with competitors such as Dennys (

A discounted cash flow calculation with an 8% discount rate and 10-year earnings per share growth rate of 8% provides a valuation that is 20% higher than today's price.

Gurus who have recently purchased shares in Cracker Barrel stock include Barrow, Hanley, Mewhinney & Strauss and

For forward-looking investors with a longer-than-average time horizon, Cracker Barrel stock looks to be undervalued. The cost and labor inflation headwinds will likely subside, particularly if we enter into an economic recession. In addition, the company has plenty of unit expansion opportunities ahead of it with only 664 restaurants at this time. Five states still do not a have a restaurant location and the company is heavily concentrated on the East Coast and in the Midwest. Further, the company has the capital to add new restaurant concepts such as Maple Street Biscuit.