Bargain hunters may want to feast their eyes on a South San Francisco-based biotech focusing on cancer treatments.

NKTX, Financial) is at least as good as Fate Therapeutics Inc. (FATE, Financial) at a tenth of the price, according to an April 25 article appearing on the website of pharma consulting group Evaluate.

Oops, make that a sixth. That’s because Nkarta jumped nearly 140% Monday to about $19 after the company announced positive results from a phase 1 clinical trial for two experimental chimeric antigen receptor natural killer therapies. NK cells are critical members of the innate immunity lymphocytes and have a critical role in host defense against malignant cells. Adoptive cell therapy using CAR redirects the specificity of the immune cell against a target-specific antigen.

Nkarta’s Car-NK therapy appears to have at least matched Fate’s. The two companies are taking different approaches, but Evaluate emphasized that Nkarta now carries the burden of market expectations.

Investors should keep in mind that the Nkarta treatment has a long way to go until it hits the market—if it ever does. Phase I studies of a new drug are usually the first that involve people and are performed to find the highest dose of the new treatment that can be given safely without causing severe side effects.

Investors will want to track long-term follow-ups to the company’s tests, which are likely to be reported at future medical meetings. 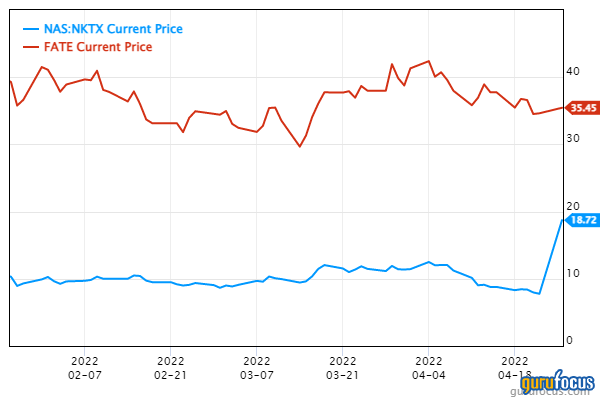 Equity researchers at HC Wainwright raised Nkarta’s price objective from $25 to $36 in a research report issued on Monday, reported Defense World. Late last month, Cantor Fitzgerald upped the company’s shares to “overweight.” Others who recently initiated coverage of the stock include William Blair and Raymond James.

Nkarta is yet to be profitable. On March 17, the company reported an earnings loss of 69 cents per share, which did beat the Thomson Reuters forecast of a loss of 75 cents. Research analysts expect Nkarta will post a loss of $3.07 for the current year.

Based on analysts’ opinions, Fate is grossly undervalued. Six members of Wall Street rate it a buy or strong buy with an average 12-month target price of nearly $92 and a high of $135, according to Yahoo Finance.