Following the various parts of John Malone’s Liberty empire over recent decades has often been a difficult task for analysts. The various spinoffs, tracking stocks, mergers and acquisitions have been complex but done with the hopes of creating shareholder value for investors. While its origins were in the cable business, today investors can own the Atlanta Braves (

BATRA, Financial) or Formula One (FWONA, Financial) through various tracking stocks. One Liberty entity that appears to be undervalued currently is Liberty Broadband Corp. (LBRDA, Financial).

CHTR, Financial), the second-largest cable operator in the United States. The company also owns GCI, the largest communications and broadband provider in Alaska.

Liberty Broadband was spun off from Liberty Media in 2014 and currently has a $20 billion market cap.

The company owns an approximate 26% stake in Charter Communications. Charter is the second-largest cable operator in the U.S. and a leading broadband communications services company, providing video, internet and voice services to residential and small and medium-sized business customers. Charter serves more than 32 million customers in 41 states. The company also serves business customers through Spectrum Business and Spectrum Enterprise. The company generated $51 billion in revenue in 2021 and produced almost $20 billion in Ebitda.

GCI is the largest Alaskan broadband and communications provider based on revenue. The company provides a full range of wireless, data, video, voice,and managed services to residential customers, businesses, governmental entities and educational and medical institutions. GCI has been in business for almost 40 years and is known for successfully operating in some of the most remote communities and in some of the most challenging weather conditions in North America. Approximately 60% of revenue comes from data or broadband services. In 2021, GCI generated $970 million in revenue and $354 million in Ebitda.

Liberty owns 100% of Skyhook, a global leader in mobile positioning and contextual location intelligence solutions. Skyhook operates a global network of billions of Wi-Fi, cell and IP locations and processes tens of billions of location signals daily across many devices, wearables, internet of things, mobile applications and mobile advertising markets.

Like most Liberty Media entities, financial reports from Liberty Broadband are often complex and difficult to follow. The results are largely those of GCI with a small amount of revenue from Skyhook. Total revenue in 2021 was $988 million and Ebitda for the year was $305 million. The wireless and data (internet) segments both showed strong growth, while video revenue declined 22%. Video subscriber declines have been a trend in the industry for many years as streaming services continue to grow. 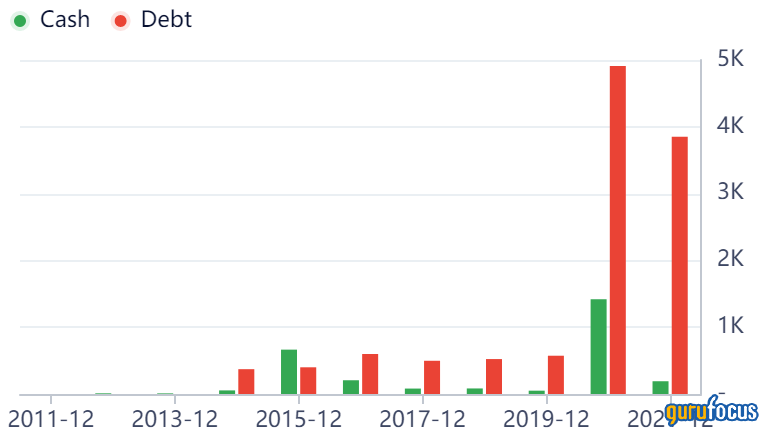 Liberty Media entities are often active in repurchasing shares when management believes there exists an undervalued or misunderstood situation. From Nov. 1, 2021 through Jan. 31, 2022, the company repurchased 8.8 million shares at an average price per share of $157.95 for a total cash consideration of $1.4 billion.

The most appropriate valuation tool for companies like Liberty Broadband is a sum-of-the-parts calculation. Liberty Broadband’s current 26% stake in Charter is worth about $24.4 billion at today’s prices. Liberty’s current market cap is $20.8 billion and after including debt of $3.8 billion, the company’s enterprise value is $24.6 billion. After subtracting the value of the stake in Charter, the market is currently valuing GCI and Skyhook at essentially close to nothing.

However, it appears that Charter itself is very undervalued. The average price target for CHTR for 16 analysts that cover the company is approximately $707 per share. That would put the value of Liberty’s CHTR closer to $35 billion, which would value GCI and Skyhook in severe negative territory.

Gurus who have purchased Liberty Broadband stock recently include

Liberty Broadband’s stock price does closely track Charter’s stock price, so investors have to be comfortable with the operations and future of Charter Communications. On occasion, anomalies exist for Liberty where their 100% owned subsidies are trading at zero or negative values, and those arbitrage opportunities usually don’t last that long. The most important reason to own LBRDA is to invest alongside the Liberty Media family, primarily John Malone and Greg Maffei, who have stellar track records of increasing shareholder value and taking advantage of arbitrage, or irrational selling opportunities.