The company has seen its share price go on a volatile upwards trajectory over the past decade, increasing by 467% cumulatively. During the fourth quarter, shares traded for an average price of $110, which is close to where the stock trades today. 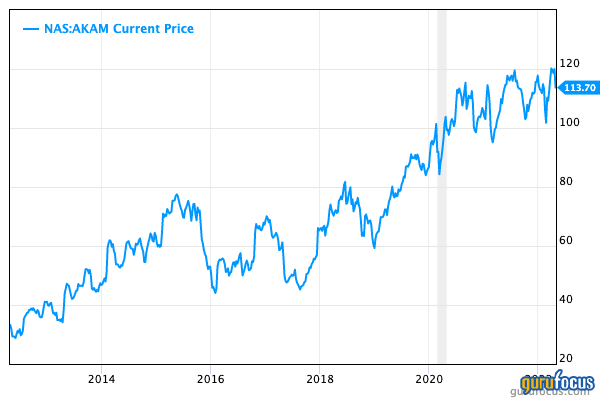 Akamai is a leading content delivery network (CDN) which focuses on performance and security. The global CDN market was worth $11.8 billion in 2020, and is forecasted to reach $49.6 billion by 2026, growing at a CAGR of a meteoric 27.3% over the period. Let’s dive into the company’s business model, financials and valuation to see what might have attracted the gurus to this stock.

Founded in 1998 and headquartered in Cambridge, Massachusetts, Akamai has developed the world’s largest CDN. A CDN isanetwork of servers that distributes content from an “origin” server throughout the world by caching content close to where each end user is accessing the internet. The benefits of using a CDN for your website include greater speed, performance and security.

Akamai has over 365,000 servers in more than 135 countries and over 1,350 networks around the world. Today, they employ a team of over 8,000 people who focus on the business' three main segments: CDN, Security and Edge Computing. Their CDN business is the largest in terms of revenue, but their Security segment is growing the fastest and has tripled in revenue over the past five years.

Leading clients include Priceline, a subsidiary of Booking Holdings (

BKNG, Financial), which uses Akamai’s “Remote Work Security” solution to provide secure connectivity to the increasing number of remote workers. This enables the connectivity to the application the person required and only the required port for extra security. This can also lead to the faster onboarding of new employees, which in Pricline's case is an increasing number of remote call center agents.

Another major client of Akamai is Lufthansa (

BUD:LUFTHANSA, Financial), Germany’s largest airline. They provide a CDN solution which was extended to include a web application firewall and siteshield. Lufthansa also took advantage of the managed Kona Service, a security operations center (SOC) which monitors the website for security threats on behalf of the company. The integration of security and web performance is a unique value proposition the Akamai offers.

Although the company doesn’t break down revenue by region internationally, they did mention having strong growth in the Asia-Pacific market. An example of a client in this region is China-based iQIYI (

IQ, Financial), which is often called the “Netflix (NFLX, Financial) of China." For that client, they offered a DNS over HTTPS solution which reduces DNS resolution time by 40% and enables websites to load faster.

Akamai has also expanded massively into the cloud and recently announced the acquisition of Linode. They are a large open cloud provider with 11 data centers globally, serving over 1 million customers and businesses worldwide. The idea of this acquisition is to combine Akamai’s leading scale, performance and security with Linode's developer friendly and easy to use environment. Akamai has agreed to be acquired for $900 million, and through the deal they expect to gain an income tax benefit over the next 15 years, which will result in savings of $120 million in net present value (NPV). 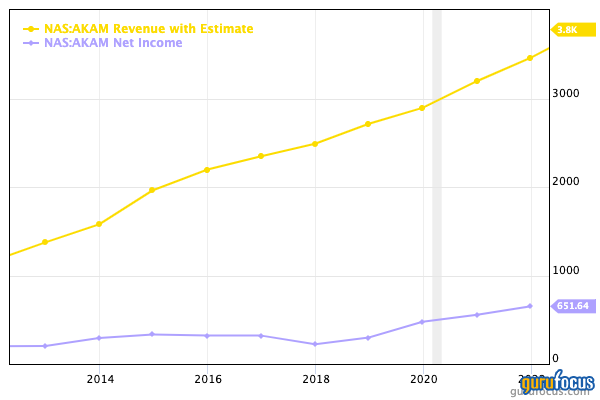 Growth in their CDN segment has been pretty much flat, while their cybersecurity business has seen revenue accelerate tremendously, especially in the fourth quarter. The company achieved strong gross margins of 63% and an operating margin of 23%, which has been increasing since 2019.

I did notice one CDN competitor, Cloudflare (

NET, Financial), which focuses more on smaller websites, has a higher gross margin but a lower operating margin. 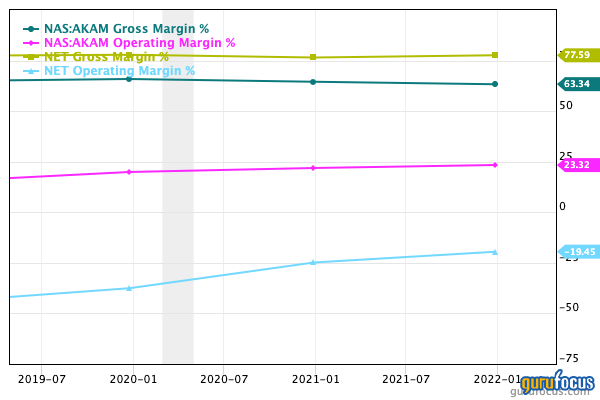 Their research and development (R&D) expenses grew to 14.43% at the end of 2021. Akamai’s balance sheet has $1 billion in cash and short term investments. Their long term debt is fairly high at $1.9 billion, but also could act as “dry powder” for expansion opportunities.

In terms of valuation, the GF value line, a unique intrinsic value estimate from GuruFocus, rates the stock as fairly valued at the current level. 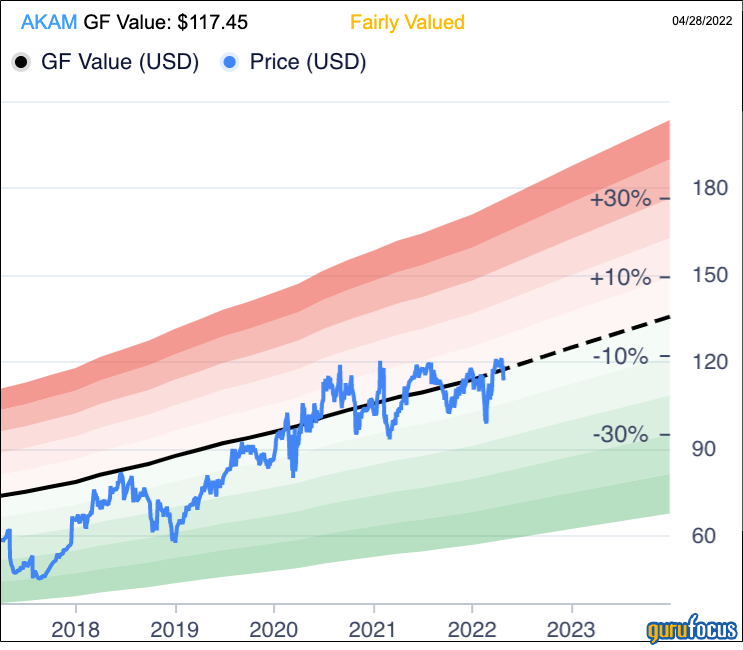 Akamai's strong security presence and expansion into the cloud offers further tailwinds for growth in addition to its CDN offerings. The stock is currently fairly valued relative to historic multiples as well as the GF Value, so those interested in the stock might want to wait for a better margin of safety in my opinion.