Investors should be aware these stocks could continue performing poorly

GCI, Financial) and Phibro Animal Health Corp. (PAHC, Financial) have seen their stocks fall dramatically over the past year, significantly underperforming the S&P 500 Index. It also seems the profitability of these companies is not improving while financial conditions could be much better. Additionally, the majority of sell-side analysts have given these companies lackluster recommendation ratings, while most of the market has an overweight median rating. This suggests these stocks are likely to underperform the market in the coming months.

GCI, Financial) is a McLean, Virginia-based media and marketing solutions operator in the U.S. 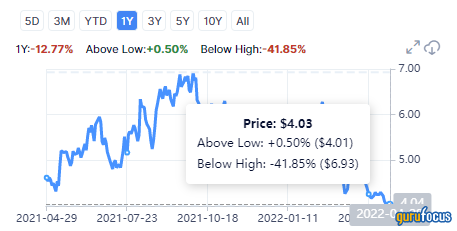 Currently, Gannett does not currently pay dividends. The company has historically paid a quarterly dividend per common share, and the most recent payment of 38 cents per share was on Nov.12, 2019.

The financial position does not look solid. The Altman Z-Score is 0.85, indicating financial distress and the possibility of bankruptcy. In addition, the return on invested capital is 9.78% versus a weighted average cost of capital of 11.13%, meaning value is being destroyed rather than created as the company grows.

In terms of profitability, the net profit margin is negative (-4.21%, while the industry has a positive median of 2.89%), mainly because the operation does not make a net profit, while sales have been falling for three years with a growth rate of -3.1% per year.

The company has strategic growth plans to invest a large portion of anticipated higher free cash flow into all business segments. These investments are not expected to bear fruit until 2024. In the meantime, the company will also use the cash to improve its cost of capital. But for this year and next, revenue is still down 2.80% year over year to $3.12 billion and down 1.60% year over year to $3.07 billion as per analysts' forecasts. This could result in a decline in the stock price, and there is indeed room for further deterioration as the 14-day RSI of 33.11 suggests the stock is not yet oversold.

On Wall Street, the stock has a median recommendation rating of sell.

PAHC, Financial) is a Teaneck, New Jersey-based manufacturer of various animal health and nutritional products that it supplies to U.S. farmers for their livestock.

Phibro pays quarterly dividends of 12 cents per common share for a trailing 12-month dividend yield of 2.66% as of the time of writing.

The Altman Z-Score of 2.93 indicates the business is under some pressure currently, though the risk isn't that great. The company is heavily leveraged, more than most of its peers, as evidenced by its debt-to-Ebitda ratio of 3.93 versus the industry median of 1.59. However, payment of interest expenses on the total debt should not be a problem as the interest coverage ratio of 6.36 is well above the minimum acceptable level of 1.5.

Operations are profitable as the company generates a net profit margin of 6.06% versus the industry median of 3.77%. But its Ebitda, earnings,and free cash flow have all declined since 2019. Ebitda fell 4.6% per year, earnings per share slid 5.9% per year and free cash flow tumbled 28.3% a year.

The near future is unlikely to be favorable for this company due to high energy and raw material costs, which will cause an increase in the production cost. The company will try to pass the higher costs on to farmers, but they are also struggling with higher fuel prices and disruptions in supply chains. Access to credit for cash needs is becoming increasingly difficult for the company's customers as monetary policy tightens to curb inflation. All of these factors could negatively impact the stock price formation in the coming months.