The credit rating agency projects a double-digit drop in debt issuance; here's why that matters

On Monday, shares of Moody’s Corp. (

MCO, Financial) dropped more than 6% after the company slashed its earnings guidance for full fiscal 2022. 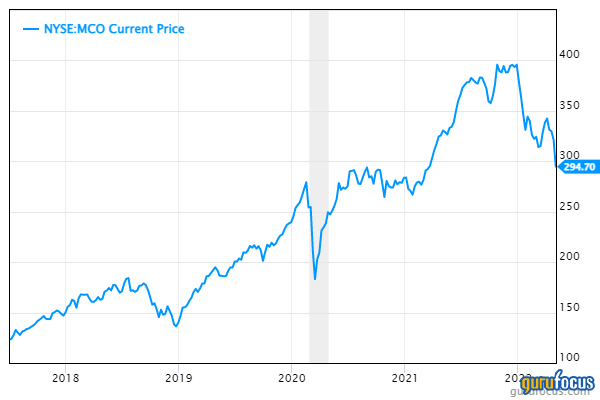 The financial services company, which is known for its credit rating business, investor services and financial analysis software, attributes the guidance cut to a double-digit drop in debt issuance.

Moody’s reassured investors that it doesn’t currently see any major slowdowns in economic activity. However, a drop in corporate debt appetite this year wouldn’t necessarily show up on balance sheets immediately, just like the Federal Reserve can’t halt inflation the moment it raises interest rates. These changes take time to work their way through the markets and make themselves known via real economic impacts.

Perhaps more importantly for investors, this signals a key turning point for where stock prices could go as the combination of out-of-control inflation and interest rate increases takes its toll.

Corporate debt on the downtrend

Moody’s reduced its adjusted earnings guidance range to $10.75 to $11.25 a share for full fiscal 2022, down from previous guidance of $12.40 to $12.90 and lower than analysts’ predictions of $11.92. The company attributed the guidance cut to interest rates, inflation and Russia’s war on Ukraine, among other factors.

In terms of its most recent quarterly results, Moody’s reported adjusted earnings per share of $2.89 for the first quarter of 2022, down from $4.06 the previous year, missing analysts’ estimates of $2.90.

In an economy where inflation is growing at a healthy rate, we would ideally see corporate debt issuance rise at a similar rate to said inflation. A decrease in debt issuance despite high inflation is a sign that companies are bracing for a recession on a large scale.

This scenario was in the cards from the moment the Fed reduced the base rate to zero during the Covid-fueled economic downturn. Together with money-printing, this move was basically borrowing money from the future, and it will eventually have to be repaid.

One of the main reasons why Moody’s remains so optimistic about the economy despite high inflation, rising interest rates and decreasing new debt issuance is likely due to the fact that many of the traditional warning signs for an economic slowdown can be explained away by the mechanics of the great corporate debt bubble.

Ever since peaking at over 20% in 1981, the Federal funds rate has been on a steady decline, occasionally being hiked to curb inflation before being lowered again as the U.S. economy hit bear market territory.

This means that for the past 40 years, minus a few blips, debt has become cheaper and cheaper, giving rise to ever-higher levels of corporate borrowing. Companies that are growing or struggling will borrow money, and then they’ll borrow even more money at lower rates in the future to pay off past debt.

Some companies have structured themselves around this mechanic to the point where their entire existence relies on being able to take on ever-increasing amounts of debt. If in the future they are no longer able to borrow more money at lower rates to pay off their existing debt, they could easily go bankrupt.

The effects of this corporate debt bubble on the economy are fairly obvious; if the Fed ever has to raise interest rates to the pain point, it could trigger a recession unlike anything we’ve seen in a century. That’s why the Fed is so hesitant to take action even with inflation nearing 10%.

That’s also why it’s worrying to see that one measly 0.25% rate hike already has Moody’s slashing its guidance, though one could make the argument that the decline is simply due to an abundance of caution causing a reduction in growth initiatives and acquisition deals.

What does this have to do with stock prices?

Whether or not the economy will enter a recession is a question that can only be answered by how the future plays out. However, one thing the corporate debt decrease could have a more immediate impact on is stock prices.

So what does corporate debt have to do with stock prices? As corporate debt has risen to a higher and higher percentage of U.S. GDP, the average valuation of the stock market has increased in tandem. Moreover, low-interest lending to companies has helped to sap the yields on treasury bonds, high-quality debt, cash and other assets traditionally considered “safer” than equities, driving yield-starved investors and institutions to allocate higher portions of their capital to stocks.

Given all of these factors, we can observe a clear correlation between higher corporate debt and stock prices. The higher the sustainable debt levels become, the more willing investors are to consider debt as the same as cash on a company’s balance sheet.

The Buffet Indicator (pictured below), called thus because it is

Warren Buffett (Trades, Portfolio)’s go-to indicator of market valuation, is a comparison between gross domestic product and corporate debt. The idea behind this chart is that the fair value of a nation’s stock market should be in line with its GDP. As we can see, the U.S. stock market has consistently been valued above GDP since the recovery from the financial crisis, which can largely be attributed to the corporate debt bubble. 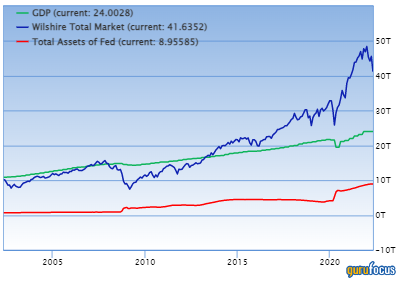 It’s still too early to tell whether the reduction in new corporate debt issuance is a harbinger of recession or merely a sign that merger and acquisition activity is slowing down due to a slight economic dowturn and an abundance of caution.

Nevertheless, the history of the past couple of decades has shown a distinct correlation between corporate debt and stock prices in the U.S. Therefore, it seems reasonable to assume lower corporate debt issuance could have negative effects on stock prices, as many companies will no longer have the benefit of being able to continuously refinance their debt at lower interest rates.