Despite missing on first-quarter sales and earnings, shares of Pfizer Inc. (

PFE, Financial) rose about 2% to close at $49.31 Tuesday. Year to date, the price of the New York-based pharma giant has sunk about 13%, while the iShares U.S. Pharmaceuticals ETF (IHE, Financial) has declined nearly 5%.

BNTX, Financial) for the Covid-19 vaccine Comirnaty and sales of Pfizer’s oral antiviral Covid pill Paxlovid. Despite coming in at $25.66 billion, sales fell short of the Zacks estimate by more than 3%.

Pull out revenue from its Covid products and Pfizer sales were up just 2%. Meanwhile, the company’s adjusted earnings per share of $1.62 also fell short of the Zacks consensus estimate of $1.66 per share, although earnings were up 72% year over year. 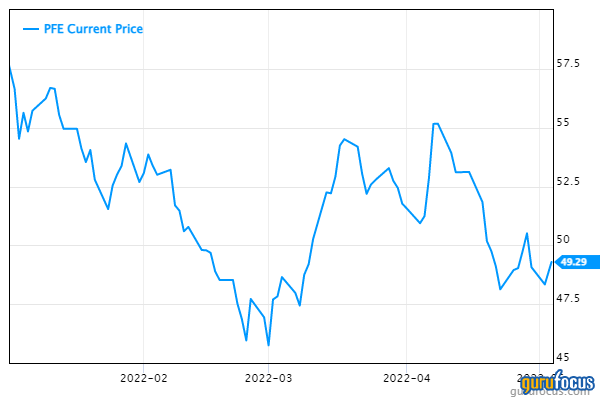 Pfizer didn’t come out and say it, but the company indicated Paxlovid could get a nice bump from short-term sales in Europe and China. Of total annual sales, the company thinks Comirnaty will contribute $32 billion, while Paxlovid will register about $22 billion.

In China, Pfizer is also partnering with a local distributor to provide access to Paxlovid, which is likely to become a traditional commercial model in the U.S., with the company expected to file for full approval shortly, Pfizer’s Chief Scientific Officer Mikael Dolsten, M.D., Ph.D., said on the earnings call.

Ronny Gal from Bernstein brought up the subject of biosimilars on the call, wondering why there’s not much in the pipeline other than the copycat for AbbVie Inc.’s (

Dolsten said that while the company is pleased with the growth of its biosimilars, the emphasis will be on innovation, so the biosimilar portfolio will have to present greater opportunities than competing investments in breakthrough therapies.

Of 22 analysts offering opinions to Yahoo Finance, 12 rate the stock a buy or strong buy, nine give it a hold and one suggests selling. The shares are currently at the low end of the 12-month price target, while the average is more than $60 and the high is $76.