Noodles & Co. Is Cooking Up Growth Despite Undervaluation

The business world is littered with failed or struggling restaurant chain concepts who grew too fast or took on too much debt. Think Kenny Rogers Roasters, Quiznos or Boston Market. One restaurant concept hoping to avoid that fate is Noodles & Co. (

NDLS, Financial). The company operates a restaurant concept offering lunch and dinner within the fast-casual segment of the industry. Core offerings include mostly noodle and pasta dishes in a variety of different styles and encompassing a mix of global cuisines. Some examples include Pesto Cavatappi, Penne Rosa, Pad Thai and Buffalo Chicken Mac & Cheese.

The average spend per customer is approximately $11.25. As of Dec. 28, 2021, the company operated 448 restaurants in 29 states, which was comprised of 372 company locations and 76 franchised units. Colorado has the largest number of units, followed by Illinois and Wisconsin. 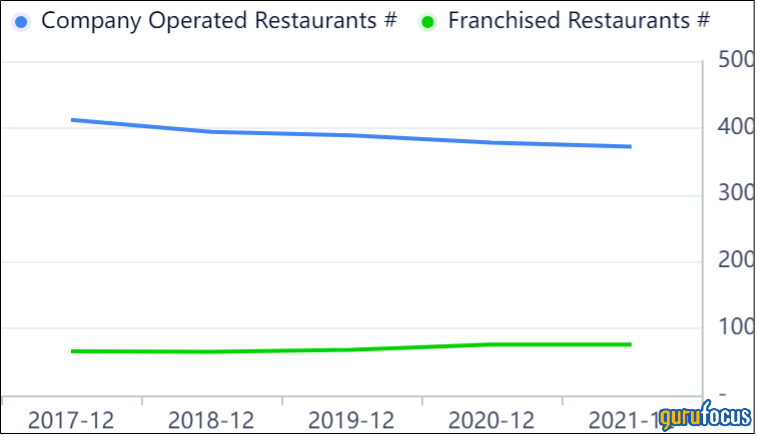 The company has had its share of struggles before, although things appear to be back on track. The company originated in 1995 in Denver and went public in 2013 at a value of approximately $300 million. Over the next 10 years, the company expanded units rapidly, but by 2015, it began closing units and exiting certain markets. In 2017, the company closed 55 locations. A successful turnaround plan was implemented in 2018, only to be set back by the Covid-19 pandemic. It appears solid growth is on the horizon.

First-quarter 2022 results were negatively affected by Covid-19-related shutdowns in some of the regions in which the company operates. Comparable restaurant sales increased 6.4% system-wide, which was comprised of a 5.3% increase at company-owned units and an 11.9% increase at franchise restaurants. The company reported both operating and net losses, which was mostly blamed on a higher food costs and greater wage increases.

Noodles has a reasonably safe balance sheet with $1.6 million in cash and $35.3 million in debt under its revolving credit facility. Adjusted Ebitda was $38.1 million in 2021 and, although 2022 levels will likely be below that, the company should return to normalized earnings levels in 2023.

The company has provided annual guidance as well as long-term goals. Noodles expects to open 35 new restaurants in 2022, with 70% of them being company owned. System-wide unit growth starting in 2023 is expected to be 10% annually with annual sales per location of approximately $1.5 million by 2024. Also, the company expects a restaurant-level operating margin of 20% by 2040. 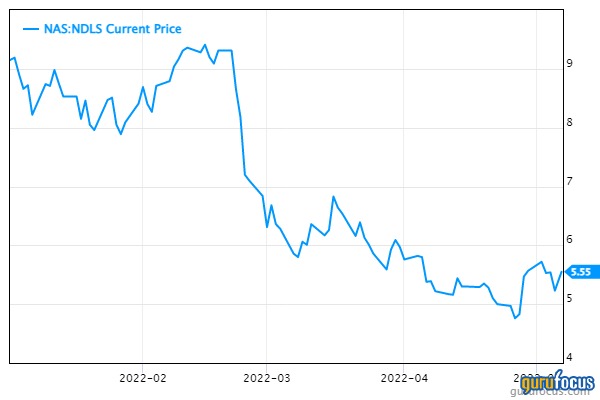 The company does not pay a dividend as it is in a planned growth phrase. However, many established restaurant chains, such as Darden Restaurants (

Gurus who have purchased Noodle's stock recently include

Almost the entire domestic restaurant industry has had struggles with Covid-19 pandemic issues, food inflation and wage pressures. It’s hard to find a publicly traded restaurant company not selling at new 52-week lows. The stock appears to be undervalued if the company can execute on its growth and margin plans. Inflation may be a long-term problem in the country, but Noodles & Co. should have decent pricing power relative to other restaurant chains.