The IT networking company is in transition 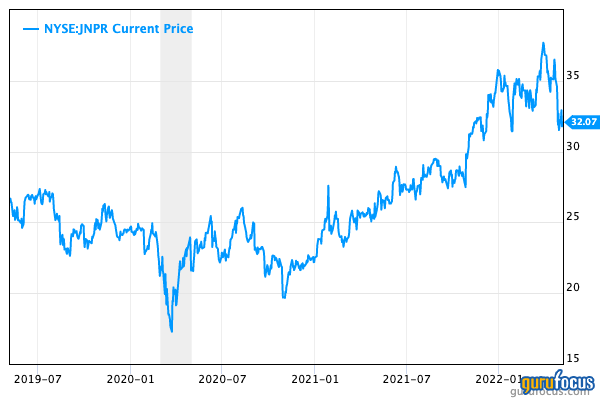 The company is currently transitioning from a hardware supplier to more of a software company, which should mean higher margins and higher operating leverage. Value investor

Jeremy Grantham (Trades, Portfolio) bought shares in the fourth quarter of 2021 at an average price of $31. Let’s dive into the business model, financials and valuation to find out if the stock offers good value.

Juniper Networks is most famous for its selection of IT hardware such as routers, switches and access points. However, the company's software solutions are growing across a multitude of applications. The company has aligned its business across three use cases:

Automated WAN can be used to automate configuration for devices. This means faster onboarding of new internet connected devices and more efficient scalability. Ultimately, this means lower costs due to less time needed to deploy and lower payments for expensive contractors. Trends driving automated WAN adoption include increasing network demands, use of artificial intelligence and the 5G network rollout.

This has even caused an increase in Juniper's 400G switch by cloud and service providers. This represents the “next generation in infrastructure” and a 4 times increase in speed compared to the standard 100 Gigabits per second switches.

The cloud-ready data center is another trend the business is addressing. It has an estimated total addressable market of $5 billion, which is expanding at a 10% compound annual growth rate. This service enables a “turnkey system for design and deployment” of a cloud-ready data center. This part of the business is secured by Juniper's leading firewall protection, which enables network and firewall components to be consolidated with a single vendor.

Juniper's AI-driven enterprise division is driven by Wi-Fi 6 and the increasing use of artificial intelligence by businesses. For example, the company digitized the shopping experience at Outletcity with its Mist AI product, giving customers an interactive shopping experience through a loyalty scheme and beacon-triggered special offers. This also allows the brick-and-mortar retail unit to track people's habits in granular, similar to Google Analytics.

The company is a leader across a multitude of Gartner magic Quadrants, from Enterprise LAN to Data Center Cloud Networking.

Juniper Networks announced its earnings for the first quarter of 2022 on April 26. Net revenue came in at $1.16 billion, an increase of 9% year over year but a decrease of 10% sequentially. 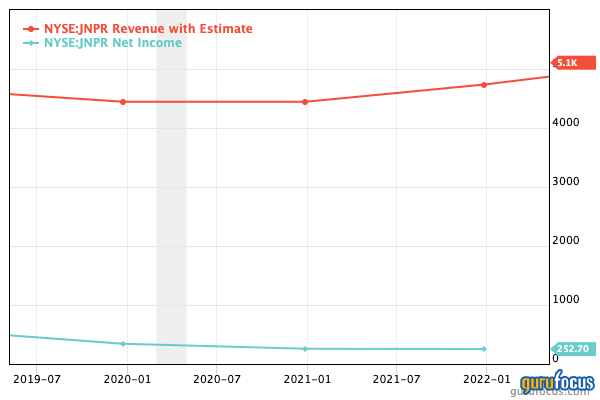 The company operates with a fairly high gross margin of 57%, but a slow operating margin of between 5% (first quarter) and 9% (fourth quarter). Net income decreased by 58% in the first quarter to $55.7 million. Some of these headwinds were attributed to supply chain issues. As the company plans to become more software-focused with its offerings, this should produce increased margins and higher operating leverage, which is a positive. 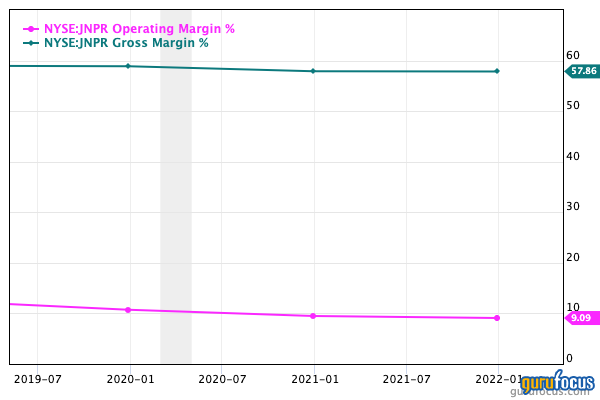 The company has a strong balance sheet with $1.2 billion in cash and short-term investments and virtually zero current debt. However, it does have $1.6 billion in long-term debt. Juniper said it is committed to paying a healthy dividend of 2.62%.

In order to value Juniper Networks, I plugged the latest financials into my discounted cash flow model. I have forecasted revenue to grow by 10% per year for the next five years, which is driven by its position in growing markets. In addition, I have forecasted margins to expand substantially from 9% to around 15% in the next four years as the business becomes increasingly software-focused. 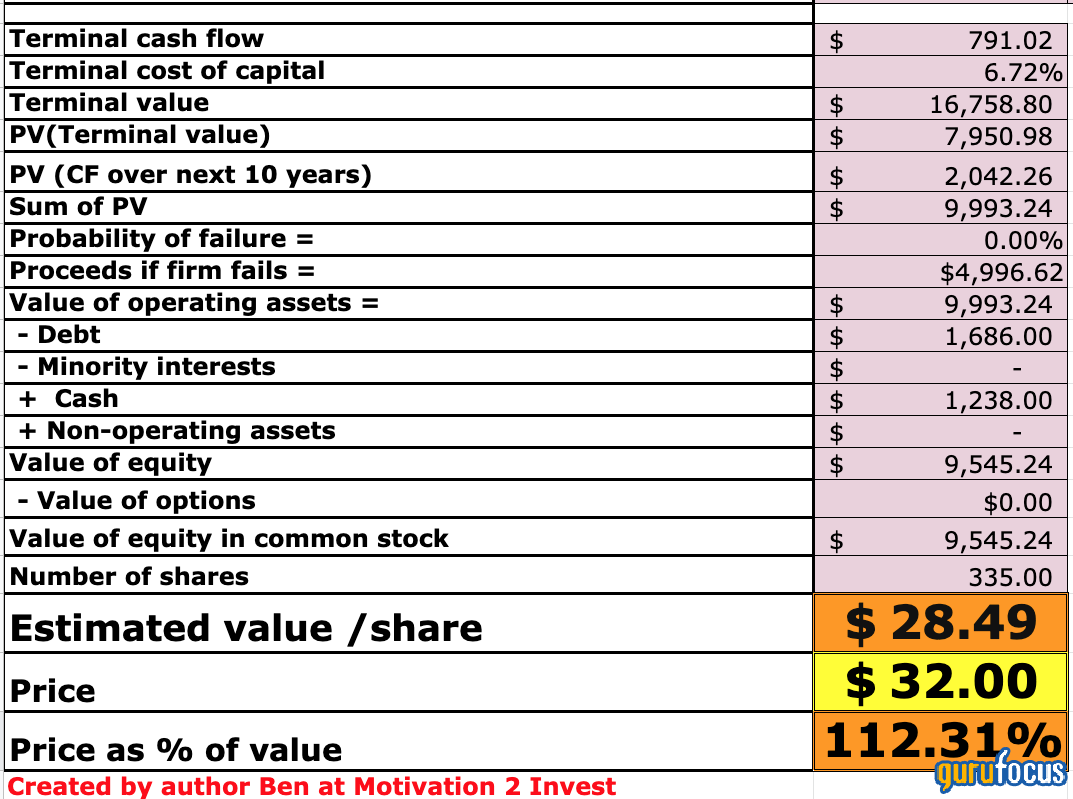 Given these figures, I get a fair value of $28 per share. Thus, the stock is slightly overvalued at the time of writing.

The GF Value Line, which analyzes historic multiples, past financial performance and future earnings projections, also suggests the stock is modestly overvalued at the current level. 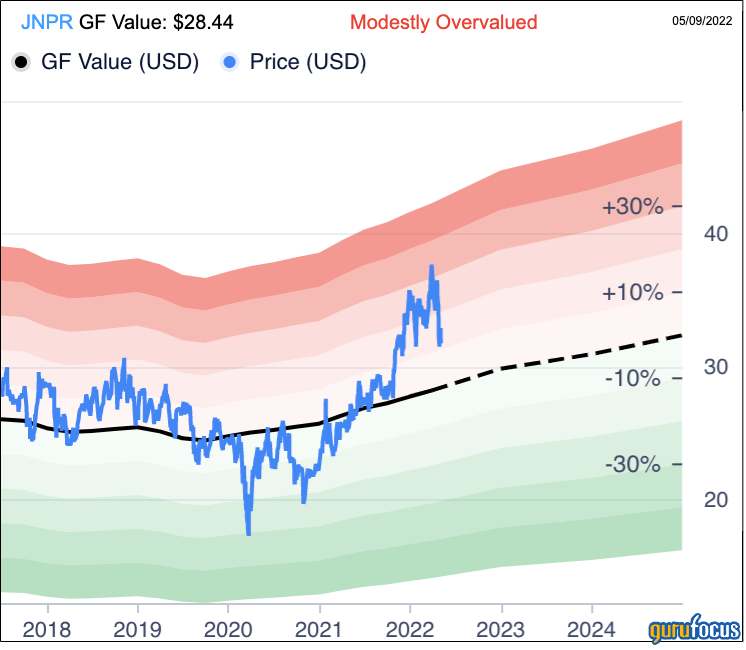 The enterprise value-to-Ebitda multiple has pulled back to approximately 15.9, which is at a similar level as in 2021 but higher than prior years. 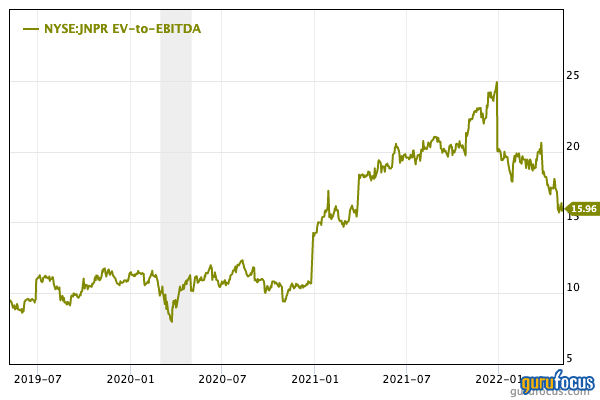 Juniper Networks is an established player in the networking industry. Its new focus on “becoming a software company” seems like a smart strategy moving forward as it is attacking growing markets such as AI and the cloud, thus I would expect growth rates to start to accelerate. The only issue is the valuation, which is a little spicy right now given the plethora of value opportunities in the market.