Founded by the late Martin Whitman, the firm headquartered in New York relies on a fundamental, bottom-up approach to deep value and distressed investing. Pursuing opportunities across market capitalizations and geographies, Third Avenue focuses on high-conviction ideas with the goal of achieving the best risk-adjusted returns.

According to GuruFocus Real-Time Picks, a Premium feature based on 13D and G filings, the firm sold 1.03 million shares on May 5, impacting the equity portfolio by -0.18%. The stock traded for an average price of $1.31 per share on the day of the transaction.

Third Avenue now holds 5.48 million shares, accounting for 0.89% of the equity portfolio. GuruFocus estimates the firm has lost 84.28% on the investment since establishing it in the first quarter of 2016.

The New York-based real estate company, which owns, invests in, manages, develops and remodels real estate assets and related securities, has a $45.33 million market cap; its shares were trading around $1.23 on Monday with a price-book ratio of 0.75 and a price-sales ratio of 1.54.

Based on historical ratios, past financial performance and future earnings projections, the GF Value Line suggests the stock is a possible value trap currently. As such, potential investors should do thorough research before making a decision. 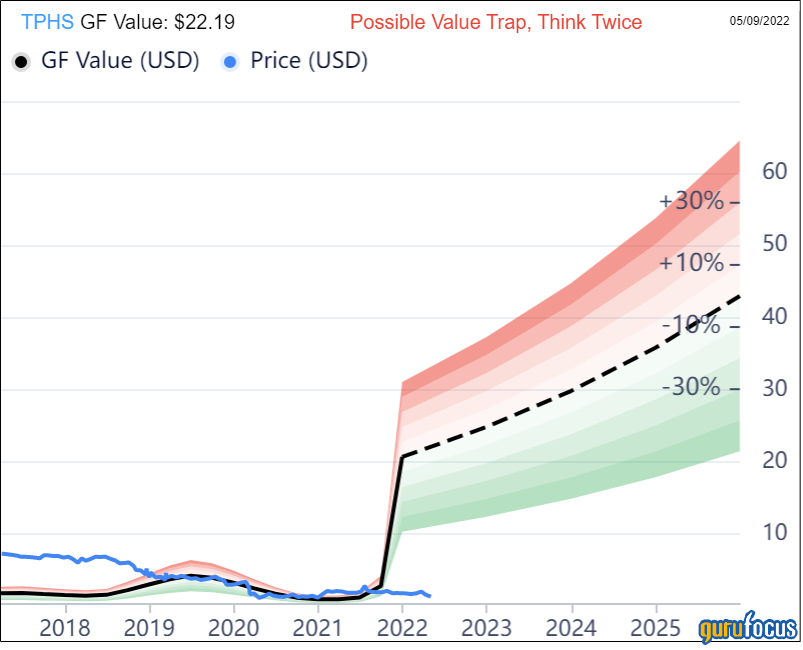 It also has a GF Score of 68 out of 100, receiving a high mark for growth, middling ranks for momentum and profitability and low grades for GF Value and financial strength. 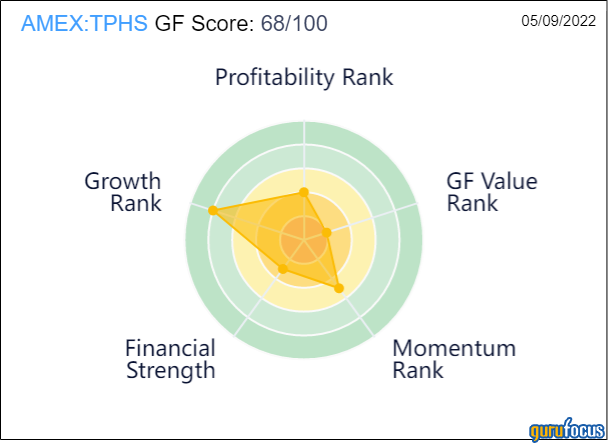 As such, Trinity has poor future performance potential.

On April 28, the company announced that it and its joint venture partner, Pacolet Milliken, closed the sale of The Berkley property to TF Cornerstone for $71.02 million.

In a statement, President and Matthew Messinger noted Trinity “took advantage of the current market to make this opportunistic sale.”

“This further bolsters our investment thesis that even when interest rates are volatile and rising, high-quality multifamily assets in prime New York City neighborhoods remain in strong demand,” he said.

The proceeds from the sale will be applied to working capital or new investment opportunities.

GuruFocus rated Trinity’s financial strength 3 out of 10. As a result of issuing new long-term debt in recent years, the company has weak interest coverage. The low Altman Z-Score of -0.17 also warns the company could be at risk of bankruptcy if it does not improve its liquidity.

The company’s profitability did not fare much better, scoring a 4 out of 10 rating. While the operating margin is expanding, the negative returns on equity, assets and capital underperform a majority of competitors. Trinity Place also has a moderate Piotroski F-Score of 4 out of 9, meaning conditions are typical for a stable company. Due to losses in operating income, however, the predictability rank of one out of five stars is on watch. GuruFocus research found companies with this rank return an average of 1.1% annually over a 10-year period.

Of the gurus invested in Trinity Place,

Over half of Third Avenue’s $760 million equity portfolio, which was composed of 59 stocks as of Dec. 31, is invested in the real estate and financial services sectors.

According to its 13F filing for fourth-quarter 2021, other real estate stocks the firm held included Five Point Holdings LLC (