SWCH, Financial) is a leading provider of data centers in the U.S. The company went public in 2017 at $20 per share, and the stock dropped to a low of just $6 per share by 2018 before going on a major bull run, up 416% from the all-time low to recent highs.

Data centers are an expanding market which was valued at $187 billion in 2020 according to Allied Market Research, and it is forecasted to reach $517 billion by 2030, growing at a CAGR of 10.5% over this period.

This stock first caught my attention because legendary investor

Paul Tudor Jones (Trades, Portfolio) was buying shares of Switch in the fourth quarter of 2021, during which shares traded at an average price of $26 apiece. The stock has popped by 26% from that point on its annoucement that it plans to be acquired by DigitalBridge Group (DBRG, Financial) and IFM Investors for $11 billion. With the stock still trading below the acquisition price, could this be an attractive arbitrage opportunity?

Switch has a total of 16 super scale data centers in operation across six campus locations. The company has bold plans to more than double their capacity from 5 million gross square feet (GSF) to over 11 million GSF.

These data centers, which they call "Switch Primes,” are strategically located in tax-friendly states, with low energy costs and reduced natural disaster risks. Some of the locations include Las Vegas, Atlanta and Grand Rapids.

They currently provide computing and telecommunications services to over 1,350 customers across a variety of industries, from technology to financial services and health care. Their top 10 customers make up 36.7% of revenue, and thus their base is fairly diversified. Switch leases data center equipment on long-term licenses (mainly three- to five-year contracts), which offers a stable recurring revenue flow.

The company is known to have some of the most advanced data center features, and CEO Rob Roy has over 700 patents issued and pending. Their technology allows low cost construction and “just in time” capital expenditure deployment via their “Switch MOD” approach. They are also vertically integrated, which provides greater efficiency than most data centers. Maintenance costs were low at just 1.1% of revenue in the first quarter of 2022. 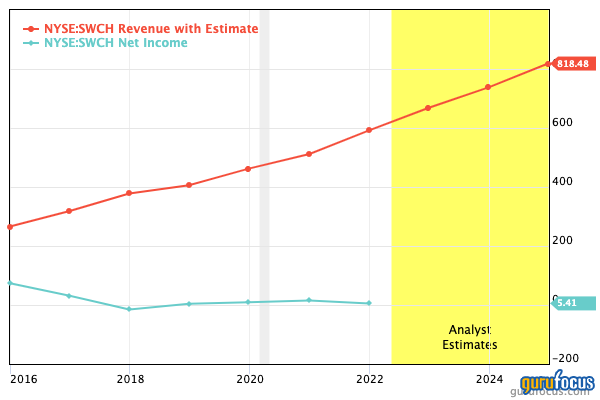 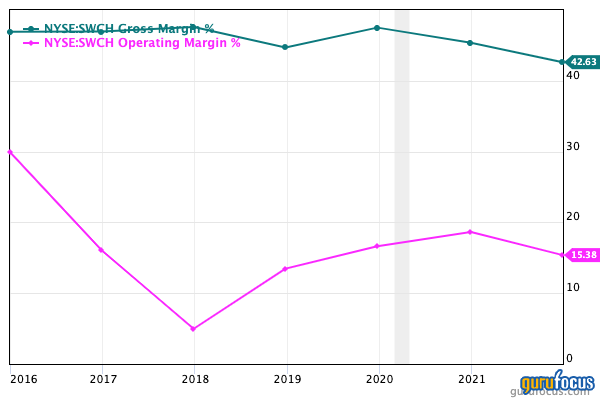 The company reported an return on invested capital of 16.4% over the past four quarters. On their balance sheet, they have $48 million in cash and minimal current debt of about $4 million. Their long term debt is fairly high at $1.6 billion, which they are using to expand.

The GF Value line indicates the stock is now significantly overvalued after the recent pop in price: 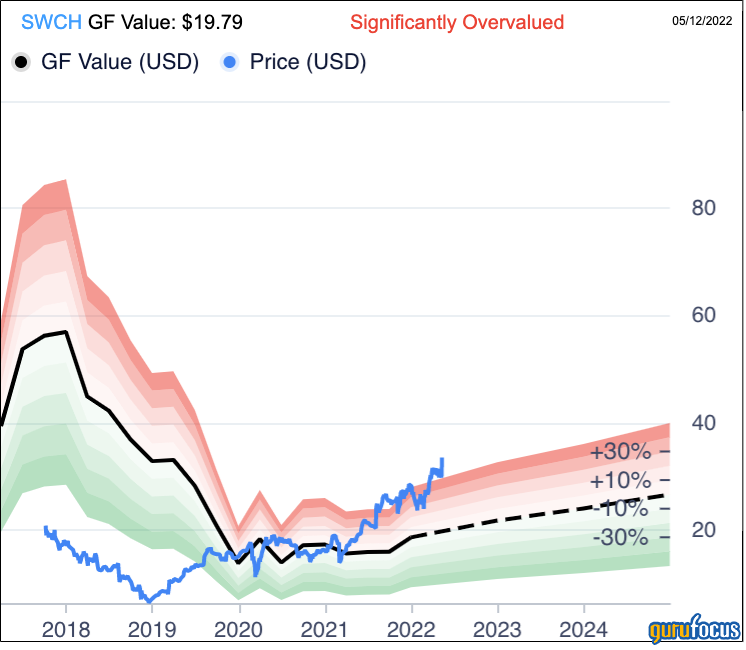 However, on May 11, the company entered into an definitive agreement with DigitalBridge Group, under which DigitalBridge Partners II and an affiliate, IFM Investors, will acquire all outstanding common shares of Switch for $34.25 per share in an all-cash transaction valued at approximately $11 billion, including the assumption of debt.

This is slightly higher than the share price of $33.49 as of market open on Thursday. That means there's not really an arbitrage opportunity left here; the market seems to be assuming this deal is certiain to go through. DigitalBridge is expected to help accelerate Switch's scaling plans through domain expertise and access to capital.

If you are already a shareholder in Switch, you should receive a nice premium to what you originally paid for the stock so long as the acquisition is completed. The only real reason to be bullish now would be if you have confidence that DigitalBridge will bring out Switch's full potential.

I personally don't like the risk/reward outlook right now given that the immediate upside is minimal and there is no gurantee the deal will close. For everyday investors with no insider knowledge of acquisition deals, I think the best way to benefit from merger arbitrage is to look for potential acquisition targets, especially companies that are actively looking for a suitor. This is especially true for companies in the technology and data center industry, which seems to be consolidating.