Rising input costs have been an issue for many companies in the consumer staples sector. The companies with the strongest brands have been able to pass along those costs to the consumer without seeing a decline in product volume.

One such company is Kimberly-Clark Corp. (

Let’s look at why I believe Kimberly-Clark has one of the strongest brand portfolios in the consumer staples space and why the stock might be a good pick for an investor looking for a leading name.

Kimberly-Clark reported first-quarter earnings results on April 22. Revenue grew 7.4% to $5.1 billion and topped analysts’ estimates by $179 million. Adjusted earnings per share of $1.35 compared unfavorably to $1.80, but were 12 cents ahead of what the market had anticipated.

The Personal Care segment grew nearly 11% to $2.7 billion. Of this, 8% was related to higher realized selling prices with volume and product mix both adding 3% of growth. Currency exchange reduced results by 2%. North America, developing and emerging markets and developed markets outside of North America grew 16%, 8% and 5%, respectively. Each region benefited from higher prices and volume was up year over year in all markets.

Consumer Tissue grew 4% to $1.6 billion. A 5% benefit from price action and a 2% improvement in volume was partially offset by currency exchange. Kimberly-Clark’s global restructuring program was a 1% headwind to results. North America grew 9%, primarily due to an increase demand for products, while developed and emerging markets were up 3%. Volume in this region did fall 2%, but this was more than offset by net selling price increases. Sales fell 5% for developed markets outside of North America, but the exiting of business was largely to blame for the decline. Volume was higher by 1% even in the face of price increases.

The K.C. Professional unit grew 4% to $800 million. Pricing added 4%, while product mix contributed 1%. These gains were reduced by currency exchange. North America grew 5%, developed and emerging markets were up by 4% and developed areas outside of North America were flat compared to the prior year.

Kimberly-Clark also provided revised guidance for the year, with the company now expecting organic sales growth of 4% to 6% for 2022, up from 3% to 4% previously. Currency exchange could reduce net sales by up to 2%. Adjusted earnings per share are projected in a range of $5.60 to $6.

Revenue grew at a high single-digit rate from the prior year. However, the first quarter of 2021 saw a decline of more than 5%, but this was in comparison to the Covid-19-fueled demand of the time for products. Compared to the first quarter of 2020, revenue grew just 2%, but was still Kimberly-Clark’s best top-line performance of the last half decade. Dating back to 2019, first-quarter organic growth is up 7%, meaning it wasn’t just the Covid-19 tailwind that is responsible for its business performance.

Profitability was impacted by inflationary pressures and was the primary cause of the bottom-line decline. This will likely be an issue for as long as Kimberly-Clark sees higher input costs.

The good news is the company has managed to institute price increases to balance these costs out. Growth was seen in almost every business segment and geographic region, even as Kimberly-Clark raised prices throughout its portfolio. Just as important, the company’s pricing action did not result in a substantial demand decline either as most areas of the company experienced volume gains.

This is one of the most important positives about the quarter, in my opinion, as it speaks to the high-quality nature of Kimberly-Clark’s brands. The company has a wide variety of brands that hold the first or second market share position in almost 80 countries. This includes brands such as Kleenex, Huggies, Cottonelle, Depend and Pull-Ups. Consumers have come to trust these brands and, apparently, don’t mind paying up for them.

On the strength of the quarter, Kimberly-Clark also raised its guidance for the year, another positive sign as initial guidance wasn’t well received by the market.

Overall, Kimberly-Clark turned in a very good quarter and provided upwardly raised guidance, with investors sending the stock soaring by as high as almost 11% following the earnings release. Shares sit just below this level at $137.50.

Using the midpoint of company guidance, Kimberly-Clark trades at 23.7 times forward estimates. Removing the average annual price-earnings ratio of nearly 41 for 2015, the stock has averaged a multiple of 20 since 2012. Using the historical average, Kimberly-Clark is slightly overvalued today.

The GF Value chart says shares are trading slightly below their intrinsic value. 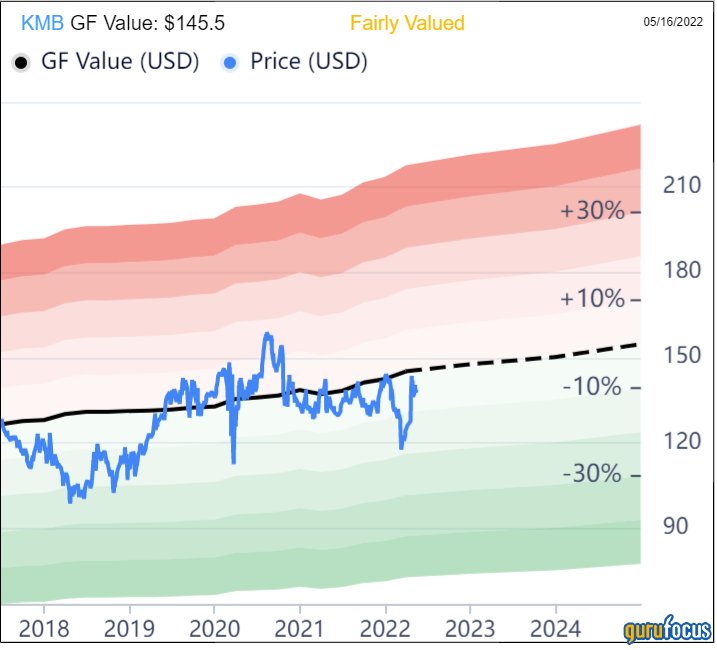 Kimberly-Clark successfully used price hikes to counteract the increase in raw material costs the company has faced in the near term. Doing so did not end up hurting the company as volume was mostly up throughout the business. The company’s brands resonate with consumers.

Even after the stock surged higher following earnings, Kimberly-Clark is still trading below its intrinsic value, though the discount is no longer what it was.

That said, there is much to like about Kimberly-Clark as a consumer staples giant. The stock also offers a yield of 3.4%, which is more than double the average yield of the S&P 500 Index. Though dividend growth has slowed in recent years, thec company has raised its distribution for 50 consecutive years, qualifying as a Dividend King.

Quarterly results, reasonable valuation and dividend history suggest Kimberly-Clark could be an excellent pick for investors looking for a leading consumer staples company.