Seth Klarman (Trades, Portfolio) is a legendary value investor who some have dubbed the “next “ Warren Buffett (Trades, Portfolio).” The guru's strategy is to invest in undervalued stocks that have a moat or competitive advantage. He even wrote a book on the subject called “Margin of Safety.”

According to its 13F filing, Klarman's Baupost Group added to its holding of fintech stock Fiserv Inc. (

FISV, Financial) during the first quarter. The stock traded at an average price of $101 per share during the quarter, which is slightly above where the stock was trading at the time of writing. The investor also added to his firm's position in Qorvo Inc. (QRVO, Financial). a semiconductor company that manufactures RF systems for Wi-Fi and 5G. He added to his position at an average price of $135, which is 20% above where the stock trades today and thus represents a significant value opportunity.

Let’s dive into these two stocks to see if they still offer value currently.

FISV, Financial) is a global payments and fintech services provider. It is one of the three largest data processing companies in the United States and the nation's largest independent processor of checks. The company offers a mix of integrated data processing solutions to over 10,000 financial institutions in more than 90 countries.

Fiserv continues its strong momentum from 2021, achieving great growth in the first quarter of 2022. On April 27, the company reported adjusted revenue grew by 10% to $3.91 billion, which was above the 7% to 9% guidance. The revenue growth was driven primarily by the Acceptance segment, which achieved an 18% growth rate that was in line with the prior quarter. Additionally, the Fintech segment's sales increased 6% and the Payments segment recorded 4% growth. 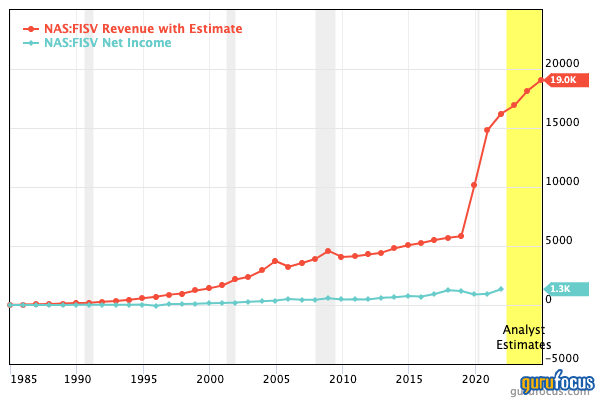 Fiserv operates with a healthy gross margin of 49%, which has been on an upward trend since the decline of 2005. The operating margin came in at 14%, spiking after a large decline in 2020. 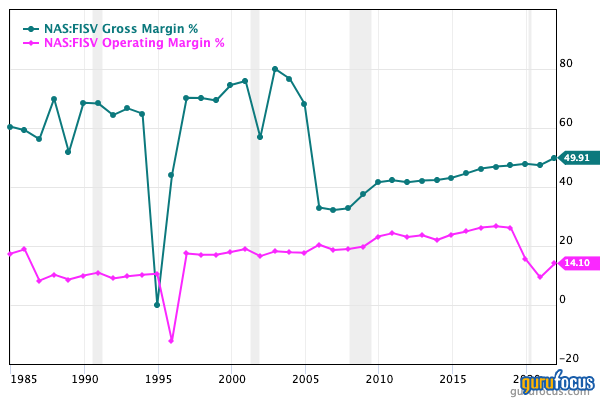 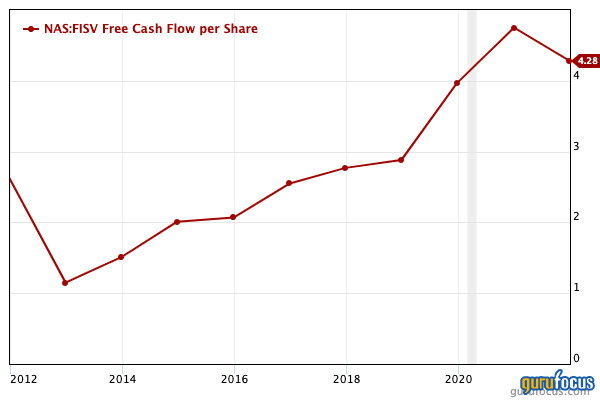 In terms of the valuation, the GF Value Line, which analyzes historic multiples, past financial performance and future earnings projections, indicates the stock is modestly undervalued. 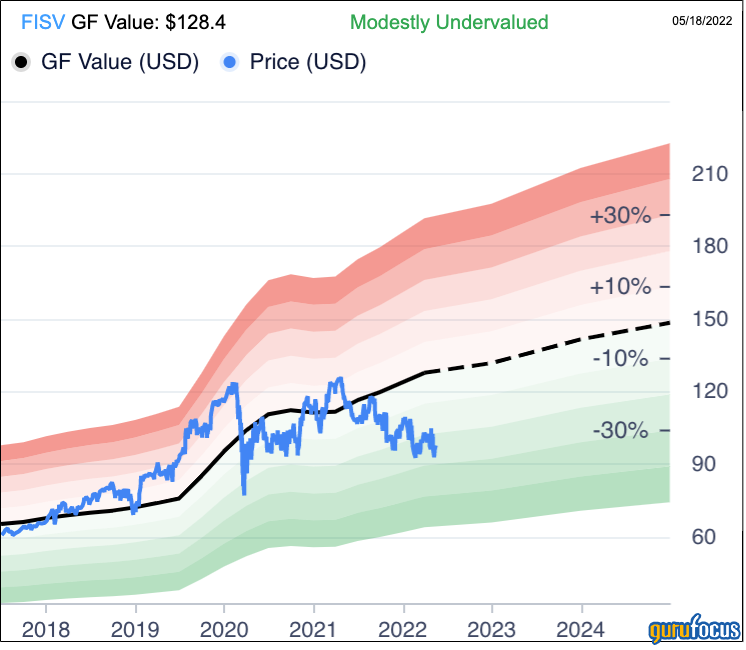 QRVO, Financial) is a U.S. semiconductor company, which manufactures radio frequency systems for applications such as Wi-Fi and 5G. The company has an envious customer base, which includes Apple Inc. (AAPL, Financial) (33% of revenue) and Huawei (10%) of revenue. These companies purchase RF solutions for their respective (and widely popular) mobile devices. The company also announced it supplied an ultra wide band, or UWB, solution for the Android smartphone.

Earlier this month, the company revealed it has ramped up shipments to a Korea-based smartphone original equipment manufacturer in order to support mass-market launches. It has also started to make progress with Wi-Fi 7 for mobile applications. 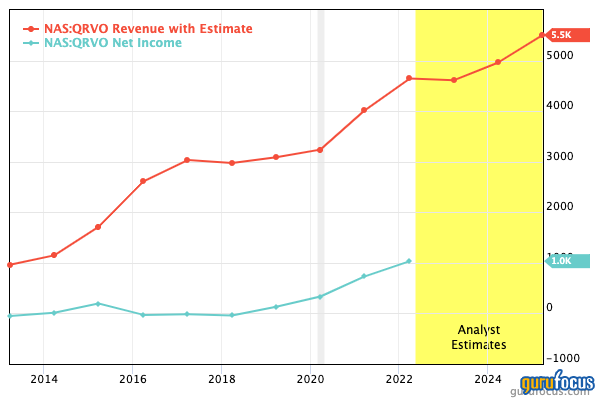 Qorvo’s margins have been on an upward trend, with a healthy 49% gross margin and 26% operating margin in 2021. 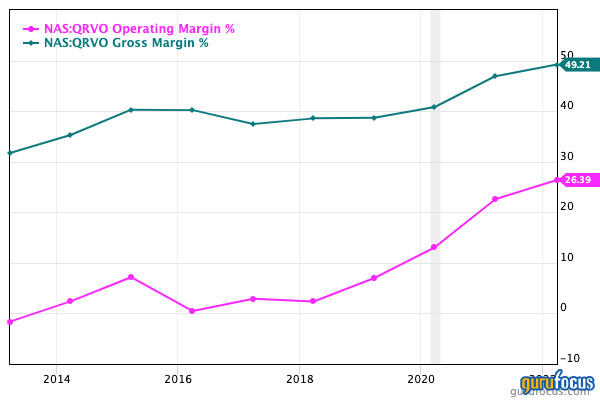 On the balance sheet, Qorvo has $972 million in cash and long-term debt of around $2 billion, which is fairly high but manageable.

In terms of valuation, the GF Value Line indicates the stock is significantly undervalued currently. 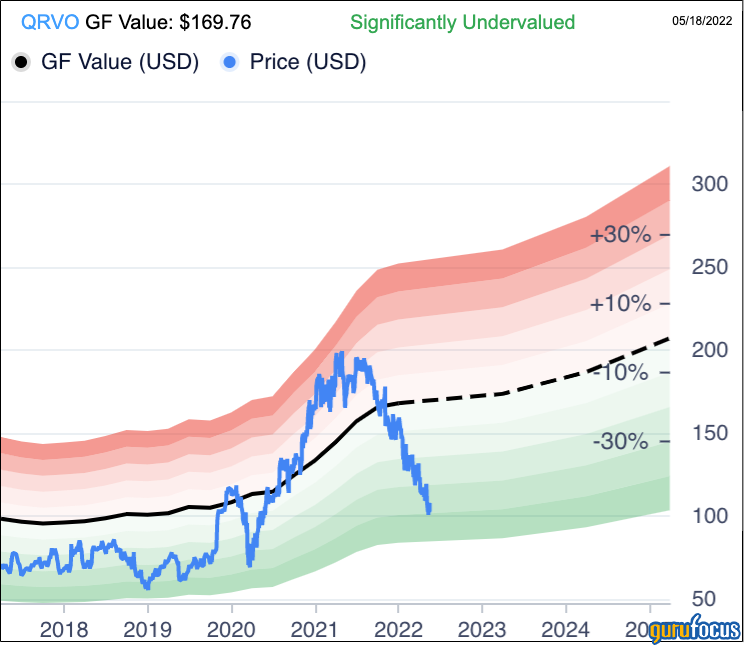 Klarman is a renowned value investor who has a disciplined strategy of investing in companies with a margin of safety. However, it’s also clear he has a focus on growth and future trends, which we can see with his most recent purchases. Either way, they seem like great stocks for the long term.

Investors should be aware that 13F filings do not give a complete picture of a firm’s holdings as the reports only include its positions in U.S. stocks and American depository receipts, but the reports can still provide valuable information. Further, the reports only reflect trades and holdings as of the most-recent portfolio filing date, which may or may not be held by the reporting firm today or even when this article was published.