Amazon Has Plummeted to Pre-Pandemic Levels; Is It Undervalued?

The stock has suffered a decline for good reasons, but those headwinds may turn out to be temporary 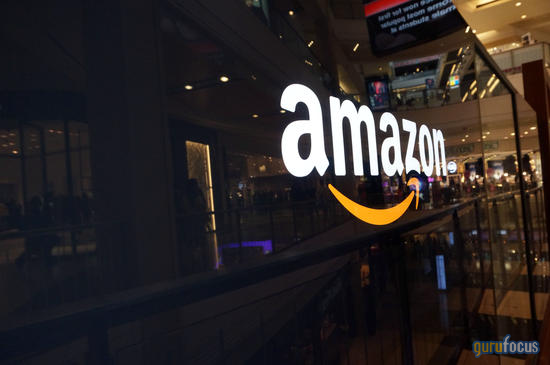 AMZN, Financial) was previously regarded as an “untouchable” or “no-brainer” stock to invest in. But now, that mentality has changed as the stock price has spiraled down by 41% from the $3,600 all-time highs in 2021. The sharpest of these declines occurred in April 2022, when the stock dropped 34% after the company released a poor first-quarter earnings report which included a net loss and was below analyst expectations. 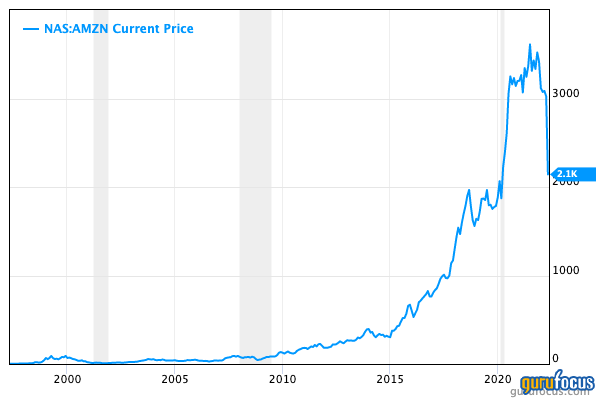 At the time of writing, the stock now trades just 2% above pre-pandemic levels at $2,142 per share. Is this just a blip in the road for Amazon, or has the story changed? Let's dive into the three main reasons why the stock is down to determine if Amazon's issues are temporary in nature, or more permanent.

Amazon noted a sharp slowdown in revenue growth in the first quarter of 2022. While the top line still increased, it was up by just 7% year-over-year compared to a 44% jump in the prior-year quarter. However, the company did beat revenue expectations overall, generating $116.44 billion, which was greater than the $116.3 billion that analysts expected.

However, earnings per share was less than expected, coming in at $7.38 vs. the $8.36 that analysts had predicted on an adjusted basis. The company also posted a GAAP net loss of $3.8 billion in the quarter compared to net income of $8.1 billion in the first quarter of 2021, while operating cash flow decreased by 41% to $39.3 billion for the trailing 12 months. 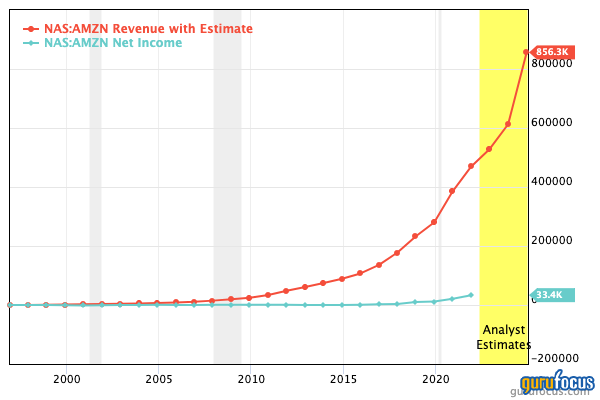 RIVN, Financial). Amazon has plans to buy 100,000 last-mile delivery vehicles from Rivian, and as part of that deal, Amazon was an early stage investor in the company, taking an 18% stake. However, the stock has plummeted by 79% from its IPO price in 2021. Thus, according to accounting regulations, Amazon has recorded this as a loss on its financial statements.

If we take the company’s reported net loss of $3.8 billion and add back the Rivian loss of $7.6 billion, we get net income sans Rivian of $3.8 billion. This is still $4.3 billion lower than the $8.1 billion produced in the first quarter of 2021, but still, a big company like Amazon reporting a net loss had may fair weather investors running for the hills.

This brings us to the second factor which has caused Amazon to post a loss, namely inflation and supply chain pressures. Despite net sales rising by 7% to $116 billion, total operating expenses increased by 13.1% from $99.6 billion to $112.7 billion. Fulfillment costs were the main driver of this, which increased from $16.5 billion to $20.3 billion, up 22%. General and Administrative expenses increased by only $600 million. 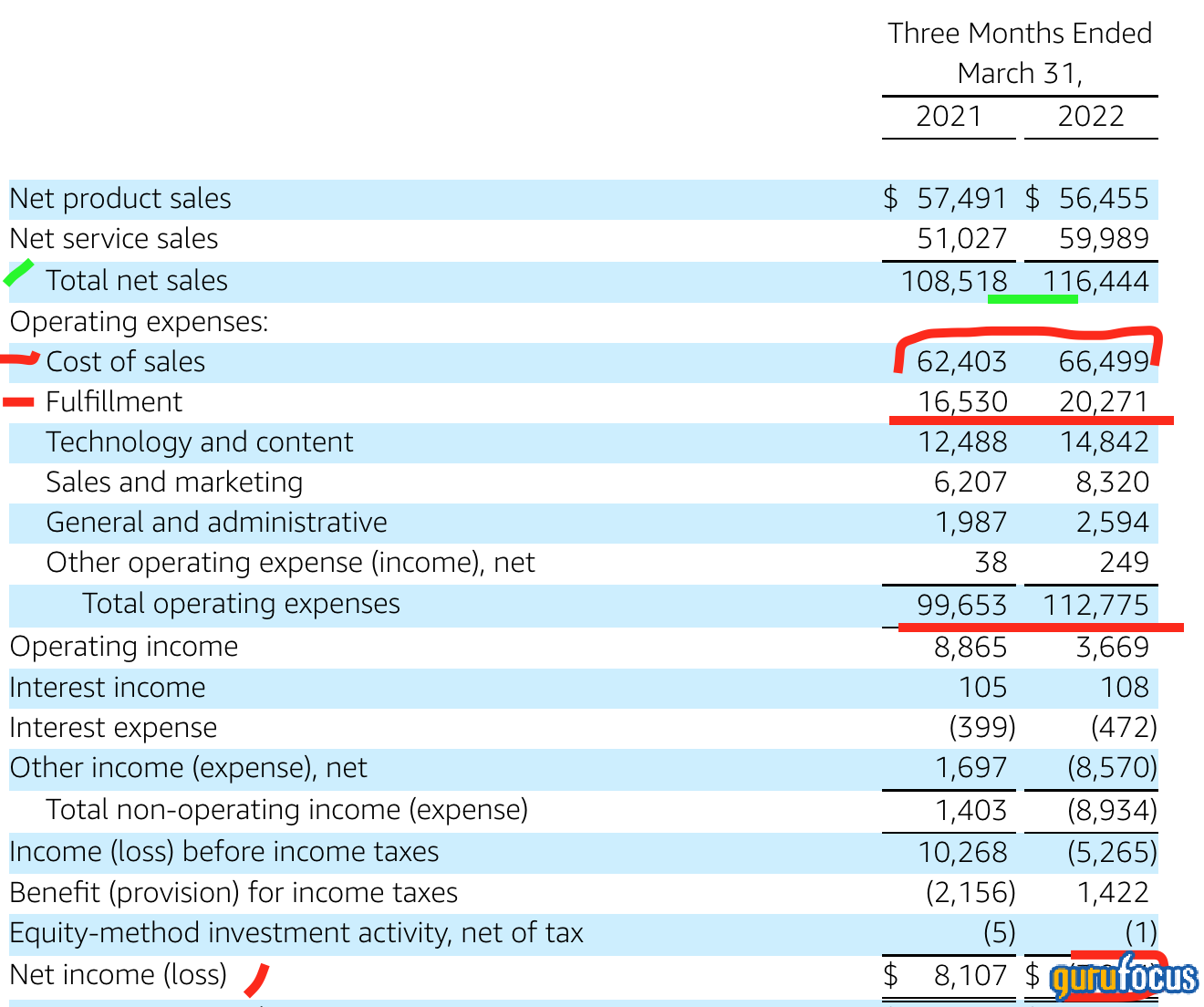 The company also invested an extra $2.1 billion in Sales and Marketing costs, which I don't believe is a major issue, as this is essential for new product launches and maininting share of mind among consumers.

Are these issues temporary or permanent?

Let's start off with the easy one; the Rivian loss is a “one off” major expense which the company had to take the paper hit on because accounting regulations require unrealized capital gains and losses to be recorded on the bottom line. But the good news is they can offset this as a tax loss.

The second issue of rising costs thanks to inflation and supply chain issues could also turn out to be temporary, but we really don't know on this one. It's the key question on every investor's mind right now, “How long will inflation last?” I personally believe that inflation will cool down from over 8% soon, though in the next few years, we may be at slightly higher inflation rates of around 4% as opposed to the ideal of less than 2%. All we can do about inflation is speculate, though.

The slowing revenue growth rate could be a short-term trend due to inflation, but it does indicate that Amazon is failing to keep up with inflation. I believe consumers tend to move in cycles when it comes to their shopping habits from large chain superstores (Amazon) to local boutique/niche stores. We saw websites like Etsy (

ETSY, Financial) have a boost in popularity during the pandemic, but there's no doubt Amazon is still the number one place for fast, cheap deliveries.

One positive is Amazon is growing in the right places with Amazon Web Services (AWS) beating expectations, reporting $18.44 billion in revenue for the most recent quarter versus $18.27 billion expected. Amazon’s cloud business is the most profitable, highest margin and highest growth segment of the company. They are the dominant market leaders in cloud and continue to extend their lead. AWS saw meteoric growth of 57% in operating income to $6.5 billion, while total operating income fell to $3.7 billion from $8.9 billion in the prior-year quarer.

According to the GF Value chart, a unique intrinsic value estimate from GuruFocus, Amazon stock is significantly undervalued." 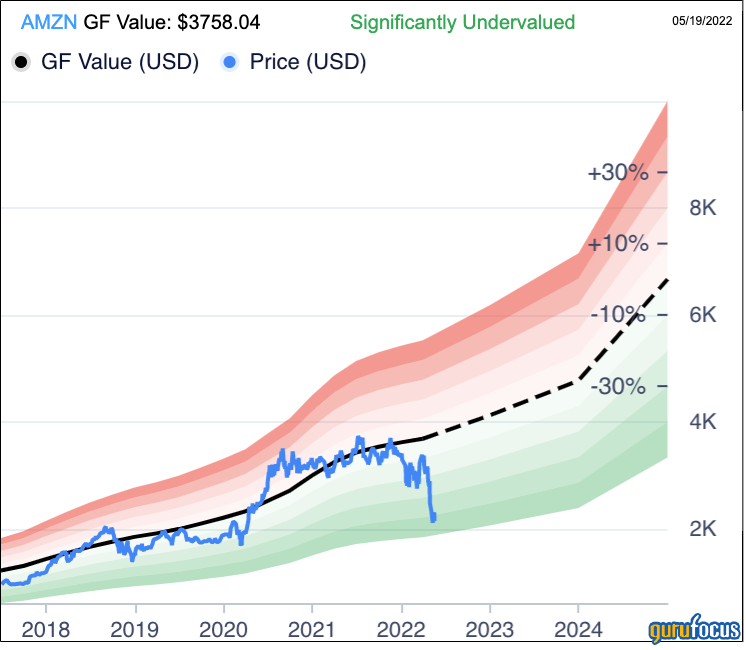 Additionally, the company’s enterprise-value-to-Ebitda ratio is trading at just 18.8, which is one of the lowest levels since the financial crisis of 2008. 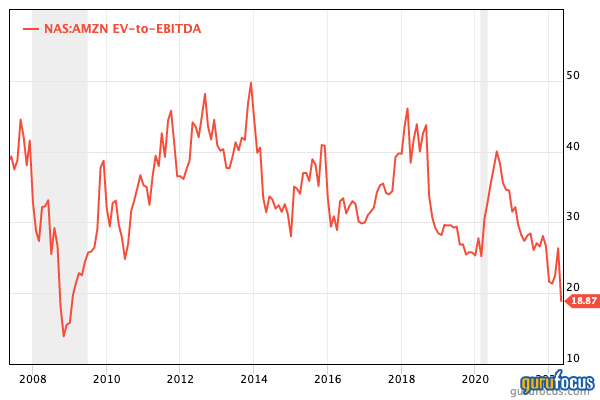 Overall, I believe Amazon's deeply-entrenched e-commerce network and cloud dominance will prove nigh impossible to shake in the long-term. Their vast fulfillment network and market position give them a strong competitive advantage. The company is facing what seems to be mostly short-term headwinds right now due to rising inflation costs and a large one-off write-down expense. Their core business model has been called into question over whether such a low-margin business will do well if we have a high inflation environment moving forward. The future of the company’s growth will rest on AWS in my eyes, as this is the key to a higher margin and more profitable future.