American Airlines: A Turbulent Ride Ahead

Despite the airline major's financial recovery, its stock price performance has been below par

With the rising interest rates to curtail the inflationary environment, stocks have been tumbling and investors are on the lookout for sectors that have a definite upside in the near future.

Airlines are often viewed as one sector that has yet to fully recover from the impact of the pandemic, and many market participants may thus see airline companies as good picks in this environment. However, this may not necessarily be true. I was recently taking a close look at American Airlines Group (

AAL, Financial) and evaluating its future prospects as an investment opportunity. The company does have some interesting developments, but whether it can turn itself around to become a good investment prospect or not is a tricky question.

American Airlines is the largest carrier based in the United States and focuses mainly on the leisure market. The management has worked towards cost management and appears to have done a good job of limiting unit cost increases during the previous aviation cycle.

DAL, Financial) as well as lower-cost domestic carriers, and inflation is also affecting the leisure market. The management is looking to gradually revive the international leisure travel business. A rebound in business travel will also benefit the company as its frequent-flier program that drives flyer loyalty should drive higher margins.

Despite how appealing airline stocks appear to some market participants at the moment, the sector remains volatile, and American Airlines is no exception to this rule. Many external factors could still have an impact on demand and profits, such as the huge spike in fuel costs on account of the conflict between Russia and Ukraine that is pushing up oil prices. There is little doubt that American Airlines and its peers have begun to recover, and demand may return to pre-pandemic levels or even higher, though this may take some time. With the lifting of lockdowns and travel restrictions, the airline industry is regaining its vigor.

American Airlines reported strong first-quarter results with an upbeat outlook for the coming months, giving the stock a boost. The airline is preparing to handle increased demand as summer travel season arrives. Their first-quarter revenue of $8.9 billion was in line with analysts' expectations, representing an impressive 84% increase over the same quarter last year. As offices reopened, domestic business travel has increased. According to the company's press release, it has received the highest number of corporate bookings since the pandemic began.

The demand for international travel appears to have increased significantly as well. Profitability continues to be elusive, but based on current demand patterns, the airline expects to be profitable in the second quarter. American Airlines’ strong liquidity helped them in paying off $4.1 billion in debt so far. It remains to be seen whether they are able to sustain this recovery, though, as the operating cost structure still qualifies it as a "zombie company," i.e. a company that must continue issuing debt in order to remain functional.

Like many of its peers, American Airlines was forced to spend some time during the beginning of the pandemic period to work on improving its cost structure. Its financial situation is in such terrible shape that even with government handouts, it had to figure out every way it could to save money.

It hasn't come out the other side in the same position as the past. Now, the company finds it has a greater struggle to compete with low-cost and ultra-low-cost carriers whose business models are based on targeting ultra price-sensitive customers and attracting them with lower fares while providing minimal facilities. In the past, American Airlines was able to offer more competitive prices.

However, despite the higher volumes, I believe low-cost competitors do not pose a significant threat to American Airlines as there are not many long-term advantages for racing to the bottom. A key factor that is worth highlighting is that American Airlines has historically had reasonably low costs per available seat mile, excluding fuel costs, as compared to peers, and has typically had a very high yield per customer. It has always managed to grab a large share of business travelers, a high-margin segment that is taking its own time to recover.

I believe that it might be difficult for the company to go back to the margins from the past decade, especially with the current outlook for crude oil prices, but the top-line recovery should continue. If the company can make more progress in improving its cost structure, it could reclaim its past advantages (though this might turn out to be less a question of whether it "can" and more a question of whether it "will"). 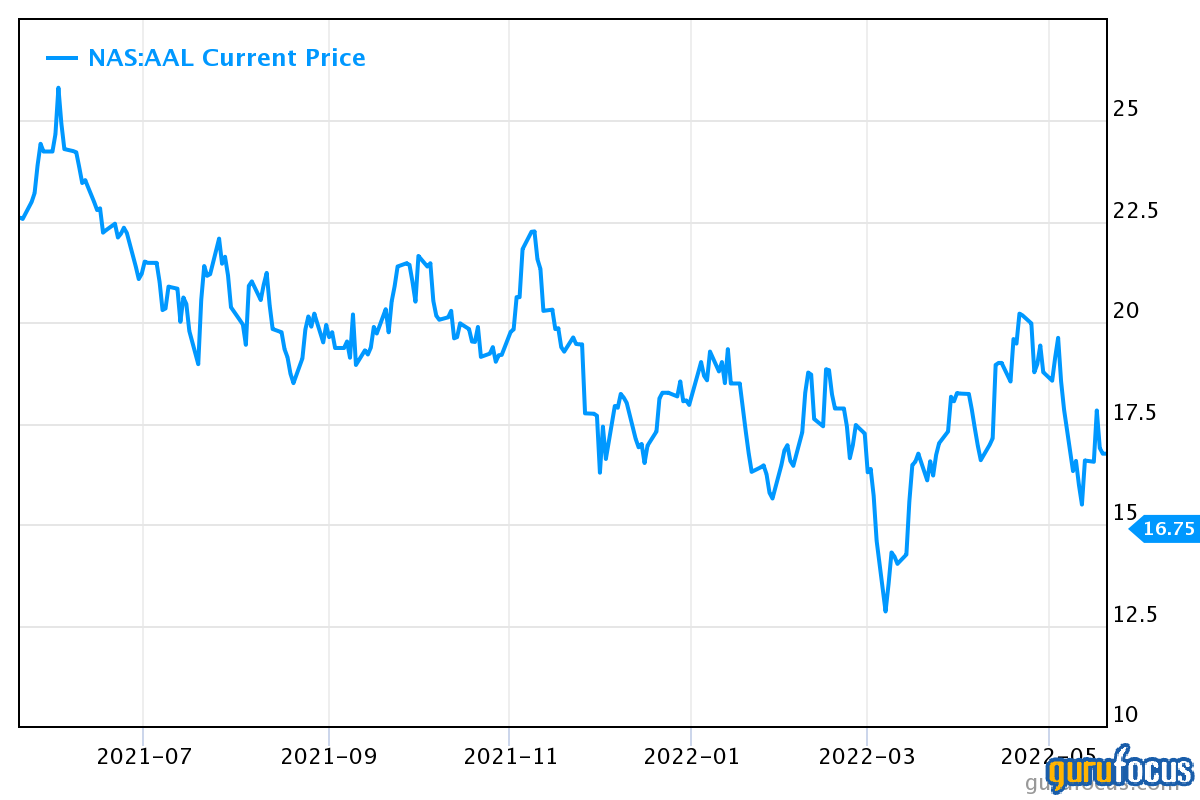 As we can see in the above chart, the stock price situation has been quite unpleasant for shareholders of American Airlines, even those who bought about a year ago, as the stock is in a downtrend Today, we see American Airlines stock trading at a price-sales ratio of 0.32 and an enterprise-value-to-free-cash-flow ratio of 52.42. While I believe the recovery of the company in the long-term is likely, the valuation of the stock does signal a certain level of uncertainty for the average retail investor. I believe that in the current market, it would be best for investors to avoid a stock like American Airlines and wait for an improved macroeconomic climate as well as tangible improvements in the cost structure.