The Nasdaq Ghosts of 1999 Are Back 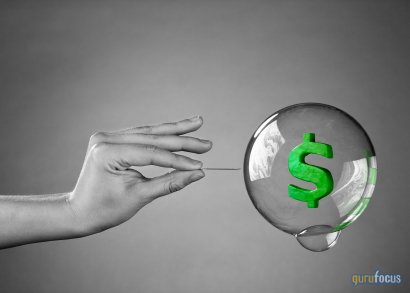 While viewing the recent Nasdaq meltdown in conjunction with the stunning and precipitous decline of cryptocurrencies, now declining in tandem with the overall market, one can see eerie parallels to the dotcom bust period of 1999 to early 2000. The Nasdaq Index’s 28% decline since January mirrors its 26% decline during the period between February 2000 and the following May.

ARKK, Financial), comprised of tech companies sporting inordinately high valuations, now sells for $43.58, down from its Jan. 1 share price of $75.43. The stablecoin TerraUSD, celebrated as an unwavering repository of value pegged at $1, ignominiously now sells for 7 cents.

Observing the carnage, Mark Twain’s aphorism comes to mind: "History may not repeat itself, but it does rhyme."

The similarities between investors’ dotcom obsessions at the turn of the century with the present growth-at-any-cost valuations now outweigh any salient differences between the two tech stock-defined eras. The single most prominent characteristic that defines each period —as different as the investment environments may have been — is unsustainable valuations that were the product of a “speculative froth.”

One of the most significant factors underpinning the decade-long valuation tomfoolery was investors unwavering myopia on “growth.” However, for many startup enterprises, the meaning of growth was not confined solely to potential earnings per share or other orthodox metrics, such as actual and projected sales, for an operational business.

Many tech startup companies hitched their wagons to the burgeoning electric vehicle craze and their business strategy was simple: catch up to market leader Tesla Inc. (

TSLA, Financial). Though the startups were competing with established car companies, their belief was that the addressable market was as vast and limitless as it was untapped.

Although there are many growth-centric tech stocks from which to choose that illustrate the fatuous valuation techniques employed, the example of Rivian Automotive Inc. (

RIVN, Financial) should suffice to illustrate growth as a concept, unhitched to any realities of manufacturing an actual product.

Rivian went public in November 2021 at $78 per share and carried a $66.5 billion valuation. At one point, the company’s market capitalization exceeded $153 billion — a figure that surpassed every other auto company in the world save Tesla and Toyota Motor Corp. (

The financial metric that justified such a lofty figure? Shortly before its initial public offering, Rivian delivered a mere 156 of its vehicles. Wall Street analysts who questioned this valuation insanity seemed to be in short supply. Ford Motor Co. (

F, Financial), which at one time owned an 11.4% controlling interest, is now shedding 8% of its stake in the company. Rivian’s stock is now trading around $29.61 a share.

The excess valuation virus spread to diverse businesses, most denoted as “tech companies,“ regardless of their actual pedestrian business operations. Many analysts, commentators and forever-sanguine bulls took pains to secern the 1999 dotcom speculative excesses from the plethora of astronomical tech valuations of the last decade, whose stock prices have now plunged back to terra firma.

Those who contended that the heady days of the post-pandemic bull market wouldn’t end in a manner reminiscent of the 1999 internet stock bloodletting, frequently distinguished the current crop of S&P 500 tech market leaders from those that occupied that same perch in 1999. Most analysis compared price-earnings ratios of the S&P 500 Index back in 1999 with those large-cap stocks that comprise that index today. As a February 2020 report in the Wall Street Journal noted:

To buttress their “this time it’s different” thesis, annual sales between the 1999 and 2022 constituent tech groups in the large-cap index were contrasted in order to demonstrate that there was more than rosy projections behind the pre-2022 valuations of the S&P 500 tech group. A Wall Street Journal article in February 2019 noted that the top tech stocks in the S&P 500,“have annual sales of about $750 billion, about 10 times that of their counterparts during the tech bubble, and they make up 6.4% of the total S&P 500 sales today, or more than four times the proportion back in 2000."

"This larger footprint doesn’t reflect any one company," it continued. "Apple (

In retrospect, the weakness of such assessments is the analysis failed to account for the fact that the S&P 500 is not synonymous with the entire market. Indeed, Tesla, one of Wall Street’s high-tech darlings, is a relative newcomer to the index. Many of the dotcom stocks that crashed in 1999 were not part of the large-cap index, just as many of the current crop of momentum tech stocks are not in that index as well. Many stocks with outlandish valuations that had no sales, no operations or profits were not members of the large-cap indexes, yet were responsible for most of the carnage that ensued when the air was let out of the speculative balloon in 1999. The same proposition applies today among the crop of growth stocks whose values have plummeted.

But more importantly, the focus should rest solely on the level of speculative valuations and not merely on the comparative sales or price-earnings ratios that might distinguish today’s tech leaders from those of 1999. Comparisons are skewed because the last 20 years of easy money has obscured what is only now becoming a drag on valuations: rapid interest rate increases by the Federal Reserve, resulting in discount rate readjustments. A 1999-2022 comparison of discount to present value methodologies is meaningless if valuations for growth stocks today have occurred in an unprecedented zero interest rate environment.

Furthermore, is it relevant whether the speculation or outlandish valuations were affixed to innovative startups that have become major businesses? Speculation is the inability to bring one’s expectations of the future profits of a company in line with financial reality. Airbnb (

ABNB, Financial), DoorDash (DASH, Financial), Lyft (LYFT, Financial), Uber (UBER, Financial) and Lucid (LCID, Financial) couldn’t be more different in terms of their financial substance and demand for their products and services than many of the evanescent, vacuous internet stocks of yesteryear. But this fact provides no solace: As Warren Buffett (Trades, Portfolio) famously said, “price is what you pay, value is what you get.” Seth Klarman (Trades, Portfolio) restated the proposition when he commented, “…security prices reflect investor’s perception of reality and not necessarily reality itself.”

The final coup de grace that poured gasoline on the long-smoldering speculative valuation brush fire was the unanticipated acceleration of rate increases by the Federal Reserve. No one — including the Fed — saw this coming. The financial discount rate modeling that helped set the pricing for many tech stocks in a zero interest rate environment has now been upended.

"Interest rates are to the value of assets what gravity is to matter," observed Buffett. Since the Fed has been playing catch-up with its interest rate policies, the pain visited upon the market has been swift and unforgiving.

The other component of the bursting of the tech bubble was the stratospheric rise in stock prices during the Covid-19 lockdowns for the stay-at-home and e-commerce companies. But inordinate earnings per share gains were pandemic-induced, one-off events that were bound to dissipate or subside.

PTON, Financial) and Zoom Video Communication (ZM, Financial) are but a few of the better-known casualties whose rise was inextricably linked to an ill-advised analysis that projected Covid-19 e-commerce gains would continue unabated.

Finally, warning signs of trouble to come were apparent for those who paid attention.

In the May 14 issue ofBarron’s, columnist Randall Forsyth recounted one such historically pertinent omen when he noted wryly:

“Could it really have been just a little more than three months since the proliferation of cryptocurrency ads on this year’s Super Bowl broadcast? Even away from the big game it seemed impossible to avoid Matt Damon intoning that 'fortune favors the brave' as he fronted for Crypto.com.

As preposterous valuations continue to decline, the words of the Oracle of Omaha once again ring true: "Only when the tide goes out do you discover who's been swimming naked." The market has now experienced a full moon-induced neap tide and the boats of far too many investors are sitting on the shoreline high and dry.