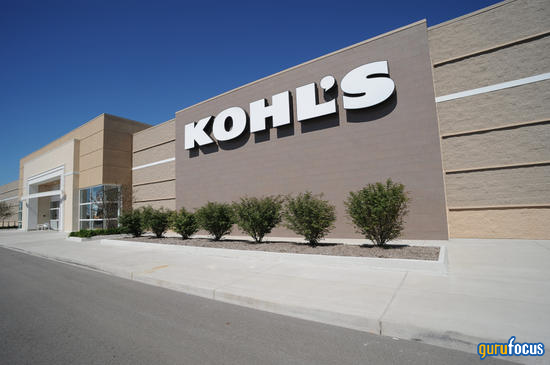 Shareholder activist dramas are usually interesting affairs for investors to watch and learn from. The latest spectacle involves Kohl’s Corp. (

KSS, Financial), a popular department store chain with approximately 1,165 locations. The name is widely recognized by shoppers all across the U.S., but very few know that Kohl’s is one of the most innovative and forward-thinking retailers in the industry.

Yet most of the recent news stories have focused on institutional shareholder Macellum Advisors and their proxy fight with the company.

Macellum Advisors owns close to 5% of Kohl's and is pushing for changes. These include issues such as spinning off the e-commerce division, electing a new slate of directors and selling some of its real estate holdings. The company's current market cap is $5 billion, but some have speculated the real estate alone is worth more than that.

GS, Financial) to not only help in the fight against Marcellum, but to also conduct the strategic review. The company has stated it already elected new outside directors in recent years and a new slate is not necessary.

However, today the activist firm opened up another salvo and accused corporate management of withholding material information leading up to this year's annual meeting. This spooked investors into fearing that the company may not be sold in the near term and the stock fell almost 14%.

XPAR:MC, Financial). The objective was to create a Sephora At Kohl's beauty experience, which would encompass approximately 2,500 square feet within a tradition Kohl's location.

This initiative has been implemented in about 200 locations with ongoing plans for a more rapid rollout, perhaps reaching 850 by 2023. The company has commented that it is seeing a strong initial response and appears to be attracting a younger and more diverse customer base.

In 2017, Kohl's entered into a partnership with the Amazon (

AMZN, Financial), in which stores would accept the e-commerce giant's returns. In 2019, the program was expanded nationwide and the company has indicated that it has increased foot traffic and brought in a younger, millennial-type shopper.

On Thursday, the company reported weak first-quarter results for the period ending April 30. Net sales declined 5.2% and net income was flat compared to the prior period. The company stated the culprit was “macro-headwinds” that were mostly related to lapping last year’s stimulus-driven results. And, of course, it mentioned a problematic inflationary environment like almost every other company in the country.

The retailer reported a use of cash of -$460 million and capital expenditures of $221 million created a burn rate that reduced cash to $941 million after share repurchases and dividend payments.

Kohl's mentioned the review of strategic alternatives is still ongoing and its continues to engage with multiple interested parties.

The company updated its full-year 2022 outlook, which included net sales growth in the range of 0% to 1%, operating margins in the 7.0% to 7.2% range and earnings per share between $6.45 and $6.85. This was a major reduction from consensus analyst estimates of approximately $7.15. Nonetheless, even at the midpoint of company guidance, Khol's stock is selling at a mid-single-digit price-earnings ratio. The company is also trading at a very low enterprise value/Ebitda ratio, which is in the 3 to 4 times range.

Using the GuruFocus DCF calculator with the low end of company guidance as a starting point and 5% long-term growth, the fair value comes out to over $80 per share.

The current dividend yield is 4.4% based on a $2 per share annualized dividend payment.

Gurus who have purchased Khol's stock recently include

Kohl’s appears to be substantially undervalued and the margin of safety looks to be incredibly high at these levels. It’s hard to imagine that if the company is sold, the buyout price will be anywhere near current levels.