McDonald's: Use the Sell-Off to Your Advantage 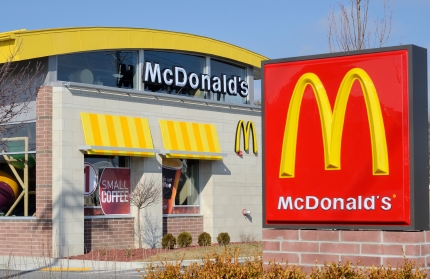 Markets continue to experience heightened volatility. The S&P 500 has fallen more than 19% year to date as the index is on the cusp of bear market territory.

In a broad sell-off, investors tend to see everything, even high-quality companies that have posted solid results and should see growth in the future.

One example of this is McDonald’s Corp. (

Back in March, I highlighted the stock as a name with safe and reliable dividend, but the most recent quarter showed that McDonald’s continues to see success in its business model. And, as a result of the broad sell-off, shares are offering solid total return potential.

McDonald’s reported first-quarter earnings results on April 28. Revenue grew 10.6% to $5.67 billion and was $94 million better than Wall Street analysts had anticipated. Earnings per share fell 28% to $1.48.

However, this includes a potential settlement related to an international tax matter of 67 cents and a 13-cent headwind from the costs associated with business in Russia and Ukraine. Adjusted earnings per share of $2.28 compared favorably to $1.92 in the prior year and was 11 cents above estimates.

Growth was seen across the business. Franchised restaurants, which account for 93% of worldwide stores, grew 13.4%, while company-owned stores were higher by 6.5%.

International Operated Markets led the way with a 20.4% improvement in comparable sales. This segment was boosted by a lifting of Covid-19-related government restrictions in certain markets, especially in the U.K. and France.

International Developmental Licensed Markets was higher by 14.7%. Strong gains were seen in Brazil and Japan, but China was weaker due to government response to Covid-19 flareups.

According to analyst forecasts, McDonald’s is expected to earn $9.89 per share in 2022, which would represent a 6.6% increase from the prior year.

First-quarter results showed improvements in all segments. They also were up against some difficult comparable results. The first quarter of 2021 saw revenue growth of 8.7%. Same-store sales for the U.S., International Developmental Licensed and International Operated segments were 13.6%, 6.4% and 0.6%, respectively, for the period.

Each segment had a two-year stacked growth rate of at least a mid-teens percentage. This can be taken to mean that McDonald’s offerings remain in high demand by consumers around the world. The reopening of economies has also been a tailwind to results. The one region where McDonald’s saw a year-over-year decline was China, but this was more about strict government lockdowns to slow the resurgence of the Covid-19 virus than about shrinking demand.

McDonald’s announced on May 16 that it is selling its 850 locations in Russia, minus the Golden Arches and other branding, to local owners. This was a minor headwind to the company in the most recent quarter. Long term, exiting the region is probably not a major challenge to results.

One area to watch is expenses, which grew 18% to $3.35 billion in the quarter. This was mostly due to an increase in selling, general and administrative expenses. Company-operated expenses were up 8%. Food inflation costs are expected to be 10% to 12% for the year. The increase in costs led company-operated stores to see a 1% decrease in margin while international fell 2.8%.

The good news is that menu prices have increased and have worked to offset this headwind. In addition, McDonald’s is leveraging its digital apparatus to help increase store traffic. In the top six markets, the company’s mobile app, kiosks and delivery made up nearly a third of system-wide sales. This was a 60% increase from the prior year and shows that these channels are working and resonating with customers. Going forward, these channels are projected to become an increasingly important part of McDonald’s operations.

McDonald’s is currently trading at 23.2 times forward estimates. This is ahead of the 10-year average price-earnings ratio of 22.3. On a historical basis, shares are slightly overvalued even after the sell-off.

On the other hand, shares look inexpensive using the GF Value chart. 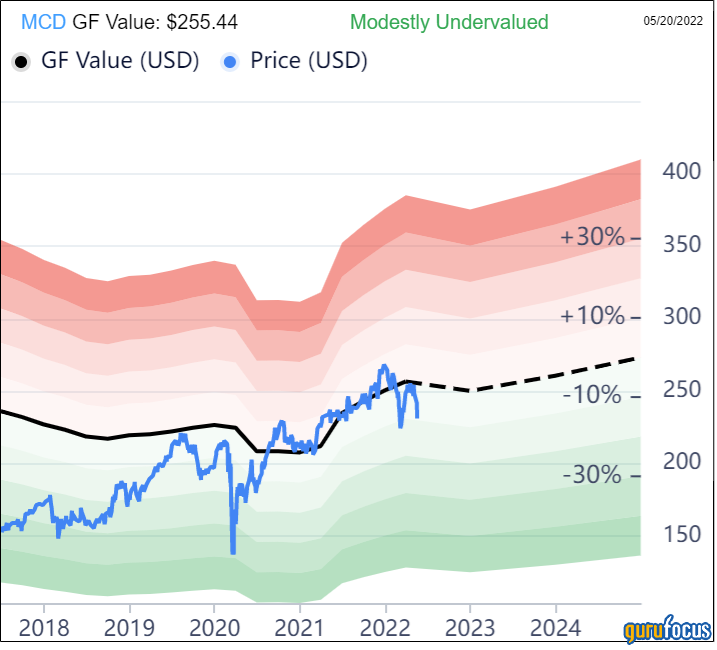 With a current share price of $229 and a GF Value of $255.44, McDonald’s has a price-to-GF Value of 0.90. Reaching the GF Value would result in an 11.5% return in share price. This is before factoring in the stock’s market-beating dividend yield of 2.4%. The stock is rated as modestly undervalued.

McDonald’s posted a solid quarter as both top and bottom-line results topped estimates. The company continues to see good growth in all of its markets, save for China, though performance is due to forces outside of McDonald’s control.

Rising costs are an issue for McDonald’s, as they are for almost every name in the restaurant industry, but the company has so far been able to overcome these expenses and still show growth. That the most recent quarter was on the heels of a strong comparable period shows the overall strength of the chain's business model.

The market-wide sell-off has meant lower prices in almost every sector. McDonald’s has not been immune to this, though the stock has not sold off as much as the S&P 500 Index. One positive of the downturn is that shares now trade with a more reasonable valuation. Investors buying today could see total returns in the double-digit range.

This suggests investors looking for quality in the carnage could do well buying McDonald’s at the current price.