A look at what stocks gurus have been selling the most

The first quarter of 2022 has signaled an end to the monetary policy-driven bull market that lasted from the Covid-19 market crash in March 2020 all the way through the end of 2021. The combination of low interest rates, heavy money-printing and easy access to corporate debt has finally made its way through the economy to cause inflation the likes of which we haven’t seen since the 1980s.

Unless companies can raise their profits more than 9% year over year to surpass inflation, they’re effectively seeing their profits decrease on an inflation-adjusted basis, which isn’t exactly a recipe for a bull market. As investors anticipated lackluster earnings reports, the S&P 500 was down 5% over the course of the first quarter, while the Nasdaq lost 10% and the Dow Jones Industrial Average dropped 5%.

It's tough for companies and investors to keep up in this environment, and it seems that is being reflected in the first-quarter portfolio updates of investment firms and hedge funds as well. Many are selling shares of companies with high exposure to inflation and risk of doing badly in recessionary conditions.

According to GuruFocus’ Hot Picks, a feature which allows investors to screen for the stocks that had the highest number of guru buys or sells based on the most recent regulatory filings, the five most-sold stocks among gurus during the quarter (as determined by net sells) were UnitedHealth Group Inc. (

UNH, Financial) is a managed care company, the largest one in the U.S. by revenue. It offers a variety of health care products and insurance services through its many subsidiaries. It has its headquarters in Minnetonka, Minnesota.

UnitedHealth has been posting strong growth numbers and guidance. As the U.S. has an ageing population, national health care spending and Medicare enrollment are both expected to increase. The U.S. health care system in general is very poorly designed, though, and investors are concerned that this will result in reduced health care spending even for necessary care. One thing that could boost results in the short-term is elective procedures that were delayed due to Covid-19.

During the first quarter, 23 gurus bought shares of UnitedHealth while eight gurus sold the stock, resulting in 15 net sells. Gurus have been net sellers of the stock for the past two quarters; in fact, UnitedHealth was also one of the top guru sells in the fourth quarter of 2021. 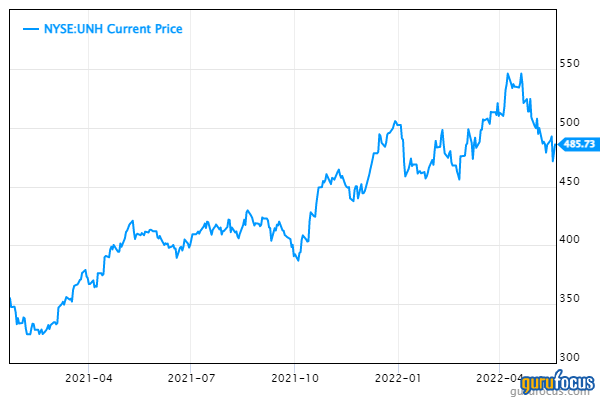 BRK.B, Financial) is the conglomerate headed by famous value investor Warren Buffett (Trades, Portfolio) and his partner Charlie Munger (Trades, Portfolio). Insurance forms the core of Berkshire’s business, but it also has a wide variety of subsidiaries, such as Berkshire Hathaway Energy, BNSF and a sizable portfolio of stocks.

Buffett’s conglomerate was not particularly active in equity markets following the Covid-19 market selloff in 2020, which caused investors to heavily discount the stock, though this situation could be reversed following Berkshire’s equity buying spree reported in its first-quarter 2022 13F filing. As Buffett grows older, investors are also worrying about how the company will fare once he is no longer in the picture. This is definitely a stock that carries a significant “key man risk.”

There were 24 gurus selling shares of Berkshire during the quarter while 10 were buying shares, resulting in 14 net sells. The stock has been a net sell among gurus for a couple of years now.

Berkshire traded for an average share price of $323.34 in the first quarter, and the stock has continued falling since then, down 5.96%. 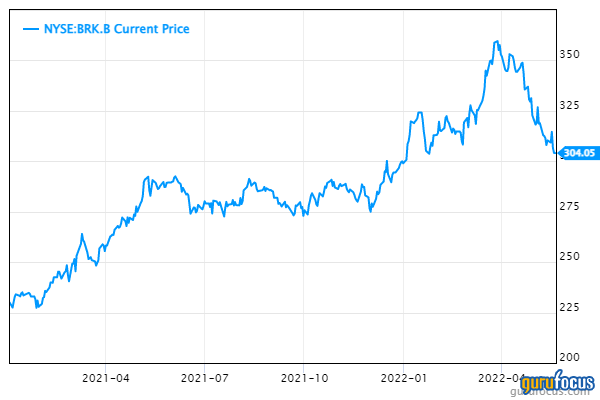 WFC, Financial) is a U.S. bank major headquartered in San Francisco. It is the fourth-largest bank in the U.S. by assets. Like its peers, the bank earns most of its revenue from loans and credit cards, though it is subject to an asset cap following its fake accounts scandal back in 2016.

Some value investors have been clinging to Wells Fargo for years following the issues with the fake accounts scandal back in 2016, hoping that someday, the cap on its assets would be lifted, causing shares to skyrocket. However, until the asset cap is removed, Wells Fargo’s upside potential will remain limited. This may not have been much of a concern when inflation was 2%, but with rising inflation and interest rates, other banks have become more attractive.

In the first quarter, 22 gurus were selling shares of Wells Fargo while eight were buying the stock, resulting in 14 net sells. More gurus have been selling the stock than buying for the past five quarters.

Gurus selling the stock recently include

Shares of Wells Fargo traded for an average price of $53.63 in the first quarter. Since the quarter ended, the stock is down 17.93%. 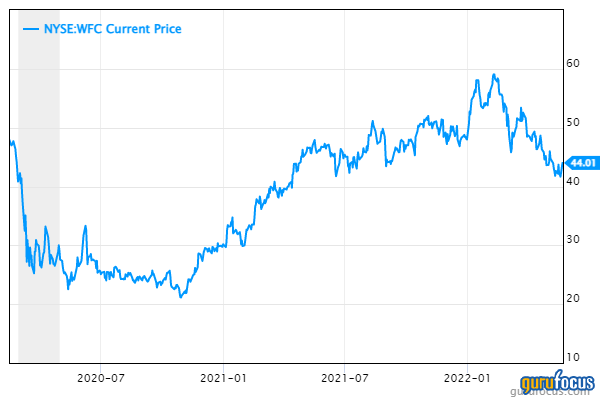 RTX, Financial) is a global aerospace, defense and intelligence company that was formed from the merger of Raytheon Co. and United Technologies in April of 2020. It is headquartered in Waltham, Massachusetts.

It might seem surprising that gurus are selling Raytheon, a major U.S. defense stock, in the midst of rising geopolitical tensions, especially the war in Ukraine. The U.S. produces far more weapons than any country in the world, accounting for 39% of global international arms exports, and is a long-established war profiteer. However, supply chain issues have cropped up for Raytheon. Demand for raw materials outstrips supply, and the company is having issues finding enough skilled workers, particularly welders.

There were 17 guru sells and four buys for Raytheon Technologies in the first quarter, resulting in 13 net sells. Before the sharp uptick in selling in the recent quarter, gurus were mostly buying and selling the stock in equal measure.

During the quarter, shares of Raytheon Technologies traded for an average price of $94.71. Since then, shares are down 3.01%. 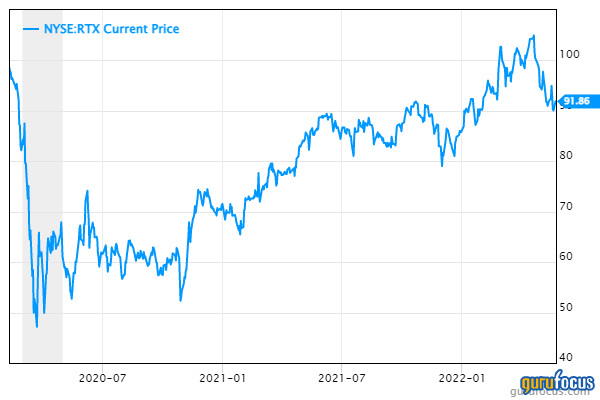 ABBV, Financial) is a biopharmaceutical company based in North Chicago, Illinois. It was formed as a spinoff from Abbott Laboratories (ABT, Financial) in 2013. The company focuses on developing treatments in the fields of oncology, immunology, neuroscience, virology and general medicine.

While most of the stock market is down, AbbVie has been on an uptrend so far in 2022, though it has pulled back from all-time highs on April 8 following first-quarter sales misses for key drugs. Humira is the elephant in the room here; the mega-blockbuster loses patent protection next year, and AbbView will likely need more than one new winner to make up for biosimilar competition. Any negative news from the company at this stage will likely be met with an overblown reaction.

During the first quarter, there were 15 guru sells compared to three buys for AbbVie stock, resulting in 12 net sells. This is the second quarter in a row that the stock is a net sell among gurus.

Sellers of the stock in the recent quarter included Buffett and

AbbVie’s shares traded for an average price of $145.09 during the quarter. From that price, the stock is up 2.63% as of the writing of this article. 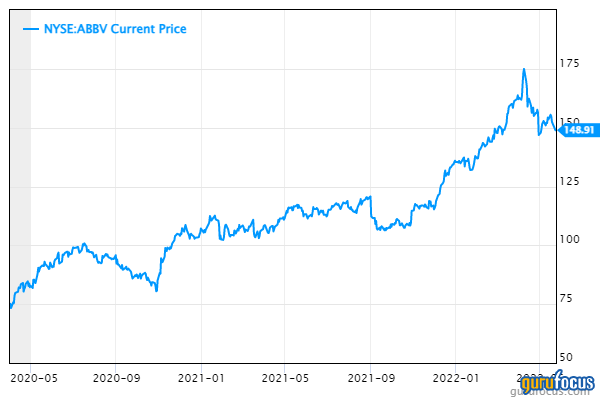