The guru's new investments include SLM and Sally Beauty

Seeking to generate strong risk-adjusted returns and capital appreciation, the guru’s Boston-based firm invests in discounted but high-quality stocks in developed as well as emerging markets.

Keeping these criteria in mind, the 13F filing showed Horn’s firm entered five new positions during the quarter, which were SLM Corp. (

SLM, Financial), allocating 1.12% of the equity portfolio to the position. The stock traded for an average price of $18.96 per share during the quarter.

Also known as Sallie Mae, the Newark, Delaware-based financial services company, which provides student loans, has a $5 billion market cap; its shares were trading around $18.56 on Wednesday with a price-earnings ratio of 8.57, a price-book ratio of 2.81 and a price-sales ratio of 3.28. 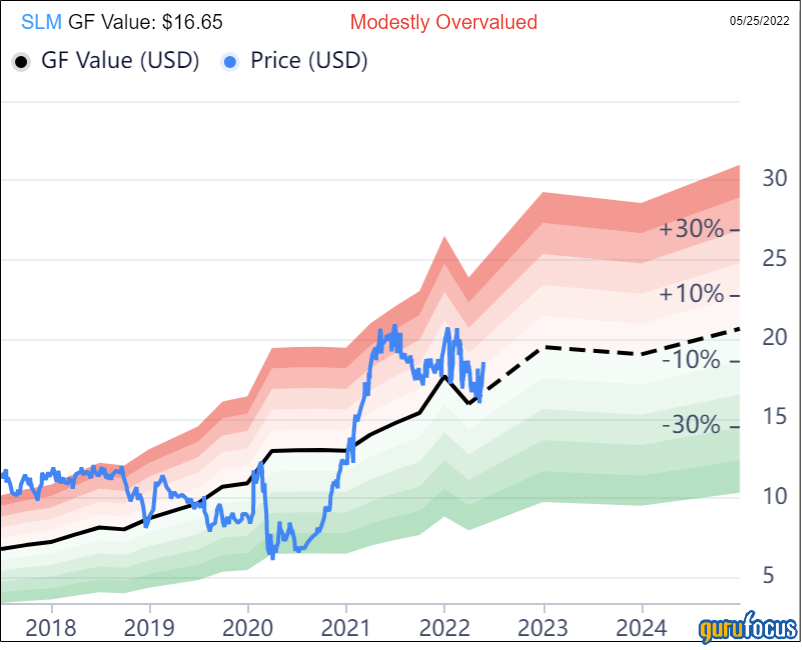 GuruFocus rated SLM’s financial strength 3 out of 10. Despite the company issuing approximately $1.1 billion in new long-term debt over the past three years, it is still a manageable level.

The company’s profitability scored a 5 out of 10 rating, driven by margins and returns on equity, assets and capital that outperform over half of its competitors. SLM also has a low Piotroski F-Score of 2 out of 9, meaning operations are in poor shape, and a predictability rating of one out of five stars. According to GuruFocus research, companies with this rank return an average of 1.1% annually over a 10-year period.

Of the gurus invested in SLM, ValueAct Holding LP has the largest stake with 5.16% of its outstanding shares. Hotchkis & Wiley and

The Canadian company, which provides enterprise information management software, has a market cap of CA$13.09 billion; its shares were trading around CA$48.90 on Wednesday with a price-earnings ratio of 22.44, a price-book ratio of 2.55 and a price-sales ratio of 3.04. 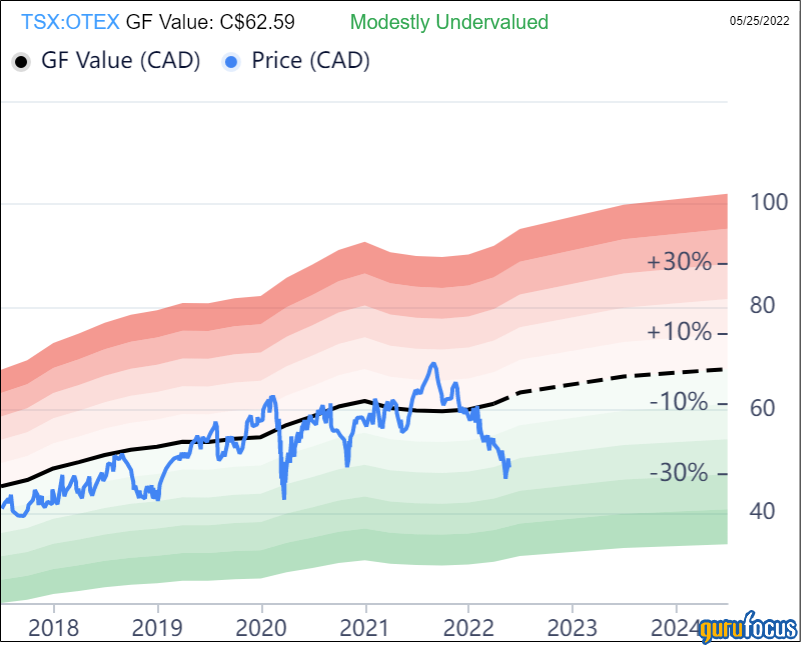 OpenText’s financial strength was rated 5 out of 10 by GuruFocus. In addition to insufficient interest coverage, the Altman Z-Score of 1.99 indicates the company is under some pressure since assets are building up at a faster rate than revenue is growing. The return on invested capital exceeds the weighted average cost of capital, however, so the company is creating value as it grows.

The company’s profitability fared better with a 10 out of 10 rating, supported by operating margin expansion, strong returns that top over half its industry peers and a high Piotroski F-Score of 8, meaning conditions are healthy. Due to a slowdown in revenue per share growth over the past year, however, OpenText’s four-star predictability rank is on watch. GuruFocus data shows companies with this rank return 9.8% annually.

With a 2.21% stake in its Canada-listed shares,

SBH, Financial), giving it 1.01% space in the equity portfolio. The stock traded for an average per-share price of $17.34 during the quarter.

The retailer of beauty supplies, which is headquartered in Denton, Texas, has a $1.52 billion market cap; its shares were trading around $14.29 on Wednesday with a price-earnings ratio of 6.27, a price-book ratio of 5.59 and a price-sales ratio of 0.41. 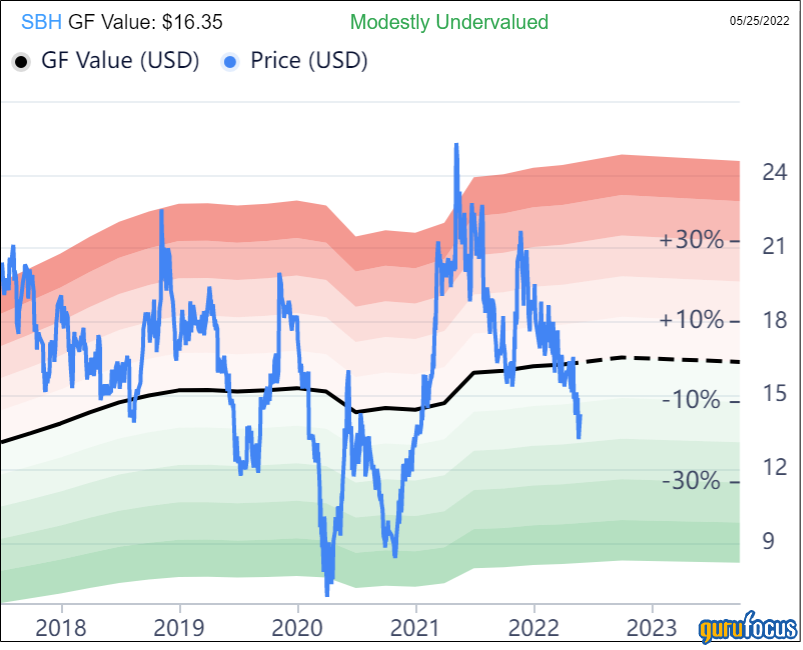 GuruFocus rated Sally Beauty’s financial strength 5 out of 10 on the back of adequate interest coverage. The Altman Z-Score of 2.8, however, indicates the company is under some pressure. The ROIC also overshadows the WACC, so value creation is occurring.

The company’s profitability fared even better, scoring an 8 out of 10 rating. Although the operating margin is in decline, its returns outperform a majority of competitors. Sally Beauty also has a high Piotroski F-Score of 7 as well as a one-star predictability rank.

NOV, Financial), expanding the equity portfolio by 0.97%. During the quarter, the stock traded for an average price of $17.49 per share.

The Houston-based oil and gas company, which supplies drilling rig equipment and related products, has a market cap of $7.49 billion; its shares were trading around $19.13 on Wednesday with a price-book ratio of 1.51 and a price-sales ratio of 1.25. 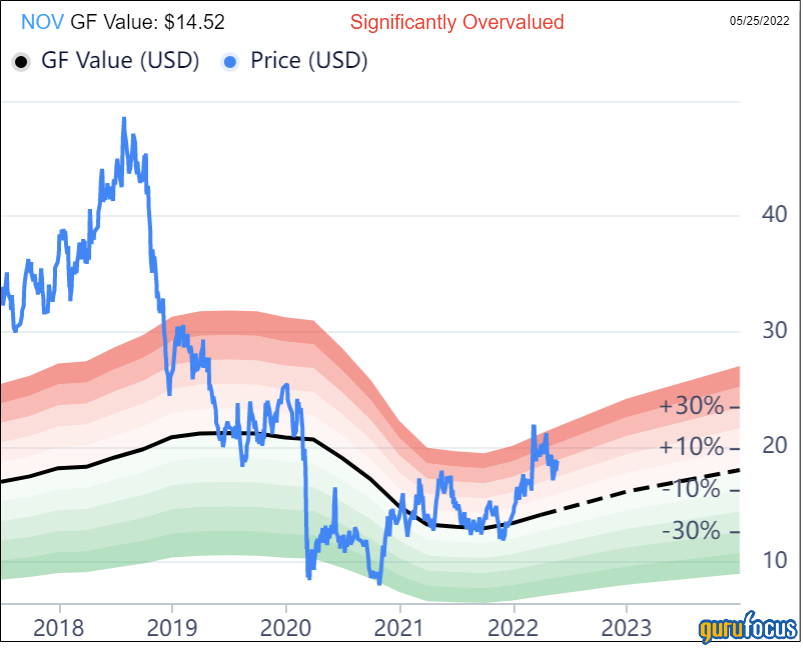 NOV’s financial strength was rated 6 out of 10. Even though the Altman Z-Score of 1.63 warns it could be in danger of going bankrupt, the company has debt-related ratios that are outperforming versus other industry players as well as its own history.

The company’s profitability did not fare as well with a 4 out of 10 rating as a result of negative margins and returns that underperform over half of its industry peers. NOV also has a moderate Piotroski F-Score of 5, meaning conditions are typical for a stable company. Although revenue per share has declined in recent years, it also has a one-star predictability rank.

Of the gurus invested in NOV,

NOMD, Financial), which make up 0.45% of the equity portfolio. Shares traded for an average price of $24.35 each during the quarter. 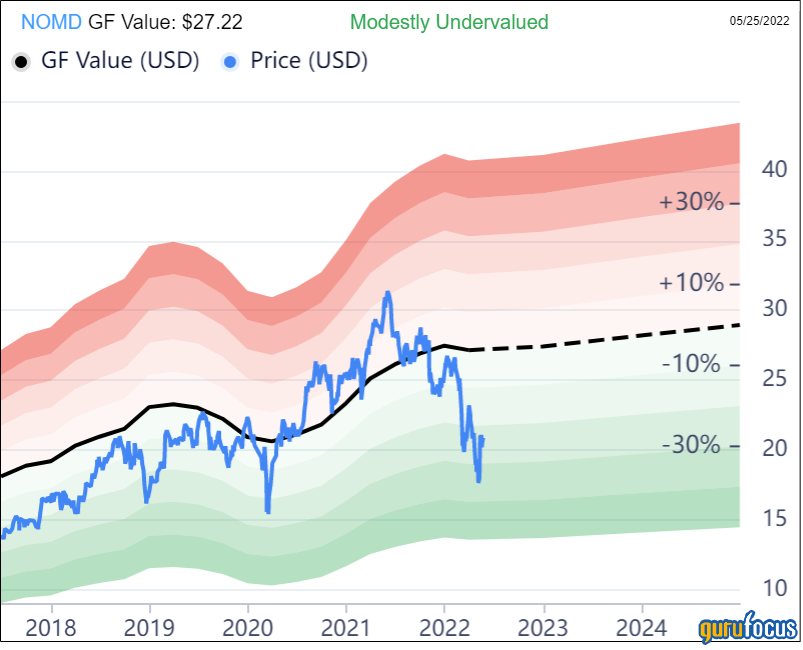 GuruFocus rated Nomad’s financial strength 5 out of 10, driven by adequate interest coverage. The Altman Z-Score of 1.22, however, warns the company could be at risk of bankruptcy. The ROIC also exceeds the WACC, suggesting value is being created.

The company’s profitability scored a 6 out of 10 rating on the back of an expanding operating margin, returns that outperform over half of its competitors and a moderate Piotroski F-Score of 4.

With a 2.52% stake, Simons’ firm is the largest guru shareholder of Nomad Foods.

Chuck Royce (Trades, Portfolio) and Gabelli also own the stock.

During the quarter, Horn’s firm also divested of its positions in Laboratory Corp of America Holdings (

Polaris’ $469 million equity portfolio, which is composed of 101 stocks, is most heavily invested in the financial services sector with a weight of 23.1%, followed by a smaller representation in the consumer cyclical, basic materials and industrials spaces.