These popular guru holdings could be value opportunities

With the S&P 500 down 13.95% year to date, value investors are wondering whether it is time to go bargain-hunting.

We have no way of knowing in advance whether the market has hit a bottom, but that is why value investors factor in a margin of safety when deciding whether or not to buy a stock. If you can buy at a discount to long-term fair value, then you should eventually earn a solid return.

One starting point to look for value opportunities is to screen for stocks trading near their 52-week lows, as these stocks are more likely to be undervalued compared to those trading closer to their highs for the year.

Among the stocks trading within 5% of their 52-week lows, the names that appeared the most frequently in the portfolios of Premium gurus followed by GuruFocus were Medtronic PLC (

MDT, Financial) was trading 2.56% above its 52-week low at $98.58 per share. The GF Value chart rates the stock as modestly undervalued. 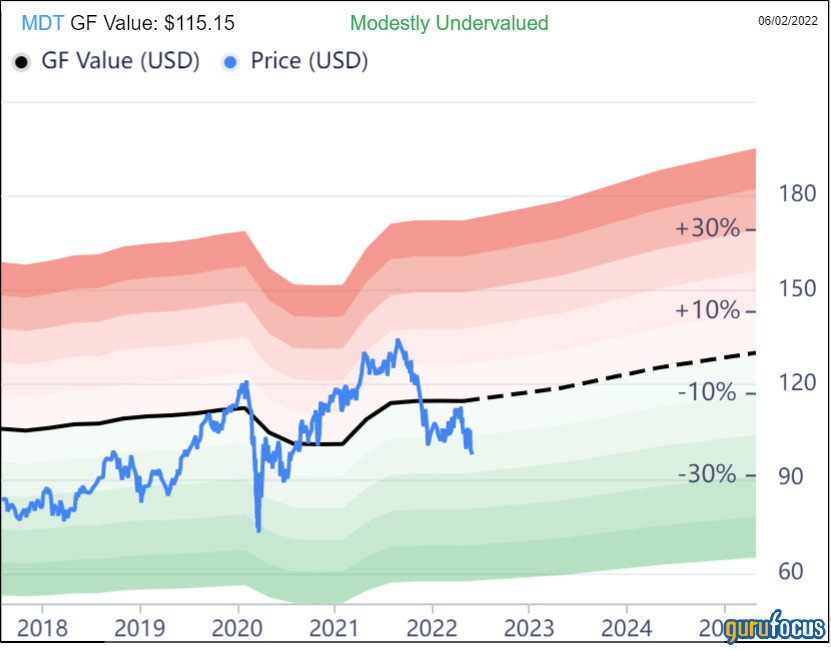 There are 18 gurus who own shares of Medtronic. The guru with the largest holding in the stock is Barrow, Hanley, Mewhinney & Strauss with 0.36% of shares outstanding, followed by Dodge & Cox with 0.34% and

Medtronic is an Irish-American medical device company that develops and sells a wide variety of medical devices to treat over 70 conditions. Although it is headquartered in Ireland for tax reasons, it generates the majority of its revenue in the U.S.

The company is best known for its revolutionary cardiac devices, including battery-powered and miniature pacemakers. It also produces products to treat diabetes and neurological conditions, as well as surgical equipment such as sensors and ventilators. A focus on common chronic conditions gives Medtronic a significant total addressable market.

Medtronic’s growth has slowed down in recent years, so it is possible that it might continue to trade below its historical valuation multiples. However, the stock offers a 2.56% dividend yield, and the business is likely to hold up well even in recessionary conditions. 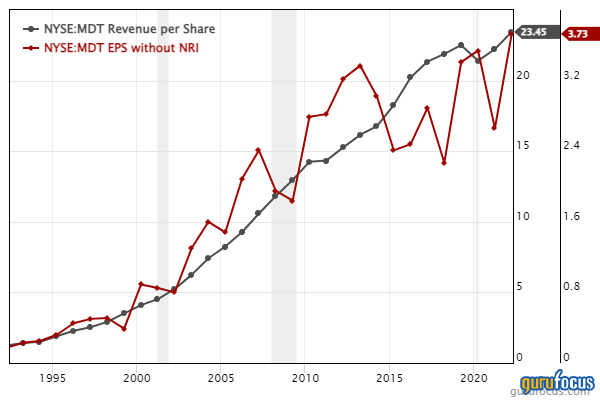 UHAL, Financial) traded around 4.61% above its 52-week low on Thursday at $502.93 per share. The GF Value chart rates the stock as modestly undervalued. 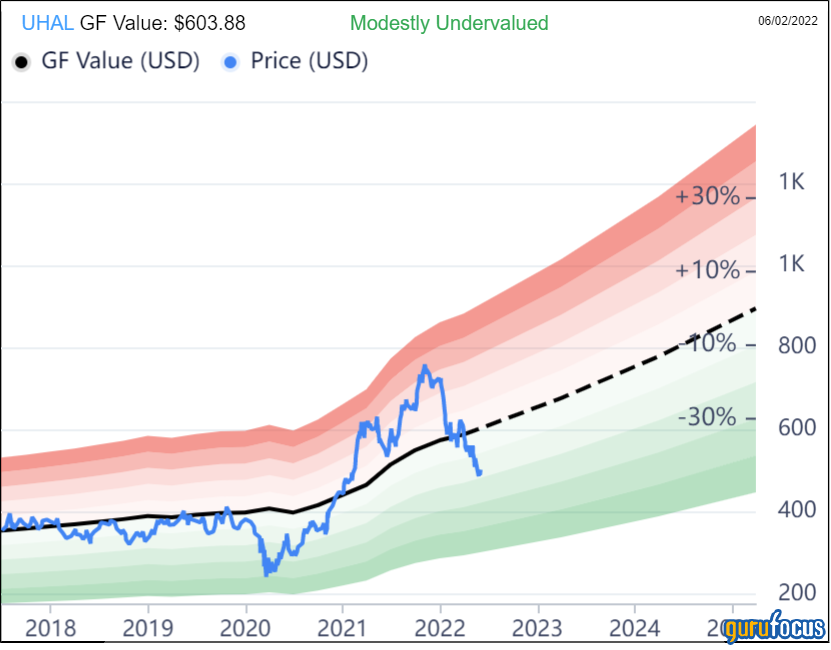 Among the 12 gurus that hold shares of Amerco, the most notable are

Self-moving equipment rentals make up the vast majority of Amerco’s business, recording $768 million of the company’s $1.19 billion in revenue for the fourth quarter of fiscal 2022. Self-storage rentals come in second with revenue of $166 million for the quarter.

Amerco benefited greatly from the hot housing market over the past couple of years, causing a spike in growth. The downside to this is that, as the housing market cools off, it will likely see a cyclical downswing in its main source of revenue. At the same time, storage revenue could increase due to the worsening housing shortage. 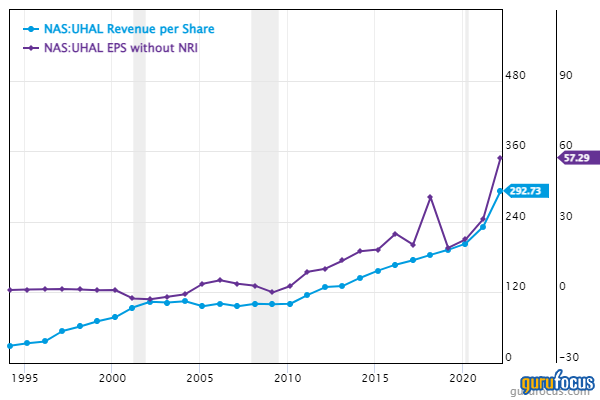 SWK, Financial) traded approximately 2.96% above its 52-week low on June 2 at $115.70 per share. The GF Value chart rates the stock as a possible value trap. 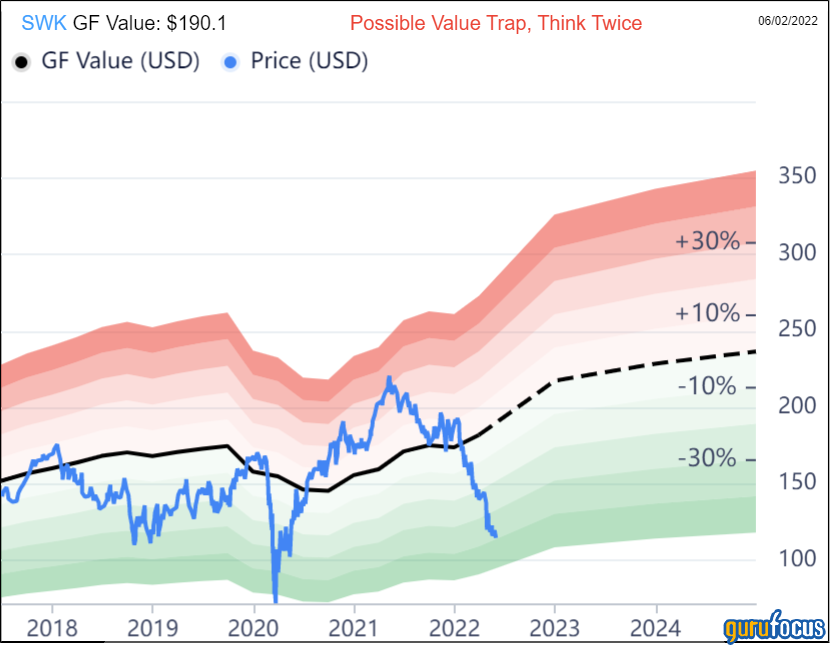 There are 12 gurus who own shares of this stock, including Barrow, Hanley, Mewhinney & Strauss with 2.08% of shares outstanding,

Stanley Black & Decker is a manufacturer of industrial tools, household tools and hardware as well as security products. The Connecticut-based company’s brands include Stanley, DeWalt, Black+Decker and Craftsman, among others.

Approximately 85% of the company’s revenue comes from the tools and outdoor segment (i.e., household tools and hardware), while the remaining portion comes from industrial. It is in the process of divesting its security business and acquiring assets in the outdoor power equipment industry.

Though the company has been growing at a decent clip, it has warned investors that it is struggling under the pressure of inflation and supply chain issues. As it gears up to raise prices again, investors are worried that a decline is imminent, which is reflected in the low valuation. Historically, Stanley Black & Decker has not suffered much even when the economy sours. 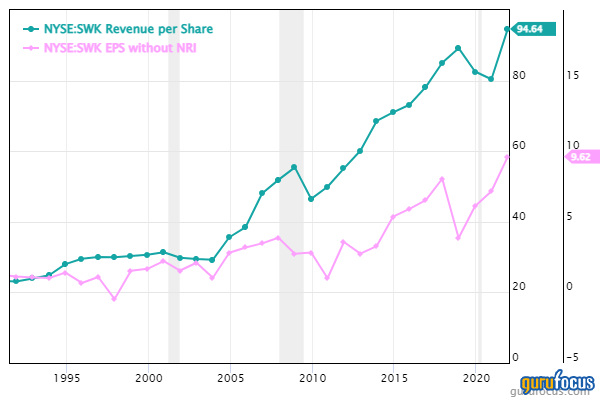