TPTX, Financial) shareholders got a good start to the weekend as the stock soared on news that Bristol-Myers Squibb Co. (BMY, Financial) is buying the San Diego-based biopharmaceutical company for $76 a share.

The crown jewel in the $4.1 billion deal is a cancer drug the New York-based pharmaceutical giant hopes will prove to be a worthy rival to Roche Holding AG's (RHHBY) treatment, rozlytrek, which was approved in 2019 and generated first-quarter sales of $16.6 million, up nearly 80% over the same period a year earlier. Turning Point's drug, repotrectinib, is being tested as a first-line treatment for lung cancer. It is expected to be approved in the second half of 2023.

Bristol-Myers Squibb will also gain several cancer medications in earlier stages of testing, strengthening the company’s quest to become a bigger player in oncology. One candidate, elzovantinib, is being developed for advanced solid tumors and kidney combination therapies. Another compound is aimed at treating advanced solid tumors.

Less enthusiastic about the acquisition were investment analysts at Raymond James. The Fly reported the firm downgraded Bristol-Myers Squibb's shares from "outperform" to "market perform" in a research note issued on Friday. Analyst Dane Leone said the market for repotrectinib is limited, pointing out that current therapies generate annual sales of only $500 million to $600 million.

Investors did not appear to be all that concerned about Leone’s opinion, though, as shares of Bristol-Myers Squibb were up fractionally on Friday at $75.09.

In comparison, Turning Point's shares climbed 116% to $74.01. The stock has traded as high as $83 in the past year, but has been on a steady decline since last August, dipping to as low as about $24. 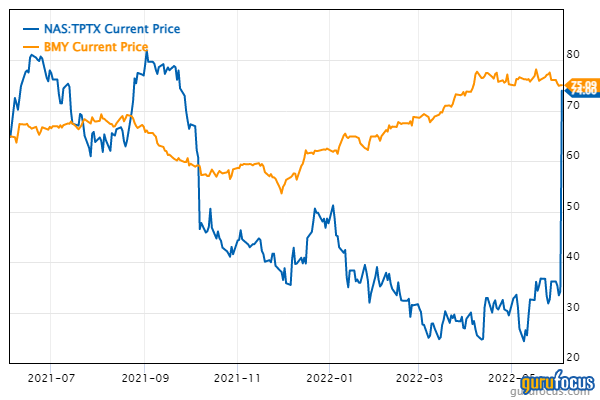 At least one analyst thinks the buyout could trigger interest in other biotechs about the same size as Turning Point, including Blueprint Medicines Corp. (

"While it's unclear if Bristol Myers' acquisition of Turning Point is a sign of more deals to come in targeted oncology, we believe it could mark the ending of the recent biotech bear market," Wedbush’s David Nierengarten said.