Could this biopharma company be a value stock?

INCY, Financial) into the realm of value stocks, in my opinion. First, it eliminated its long-term debt in 2018 (it had carried little or no short-term debt). Second, its price has fallen significantly over the past 11 months. 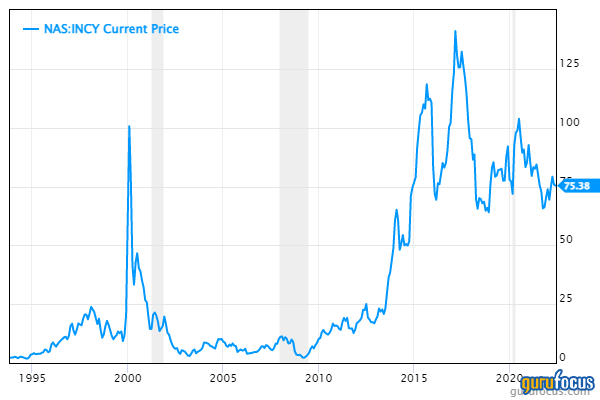 In its 10-K for 2021, Incyte described itself as “a biopharmaceutical company focused on the discovery, development and commercialization of proprietary therapeutics.”

Although it has a variety of products, about three-quarters of its revenue comes from one Hematology/Oncology drug, JAKAFI (ruxolitinib). Novartis (

NVS, Financial) has a license to market JAKAFI in international markets, using the name JAKAVI.

Incyte’s patent on JAKAFI expires in 2027, and the company is actively searching for new products that will maintain and grow its revenue. One of those is Opzelura (ruxolitinib) cream, which the company describes as “a novel cream formulation of Incyte’s selective JAK1/JAK2 inhibitor ruxolitinib, is the first and only topical JAK inhibitor approved for use in the United States for the topical short-term and non-continuous chronic treatment of mild to moderate atopic dermatitis (AD) in non-immunocompromised patients 12 years of age and older whose disease is not adequately controlled with topical prescription therapies, or when those therapies are not advisable.”

The company summarized its pipeline in this slide from its Q1 2022 investor presentation: 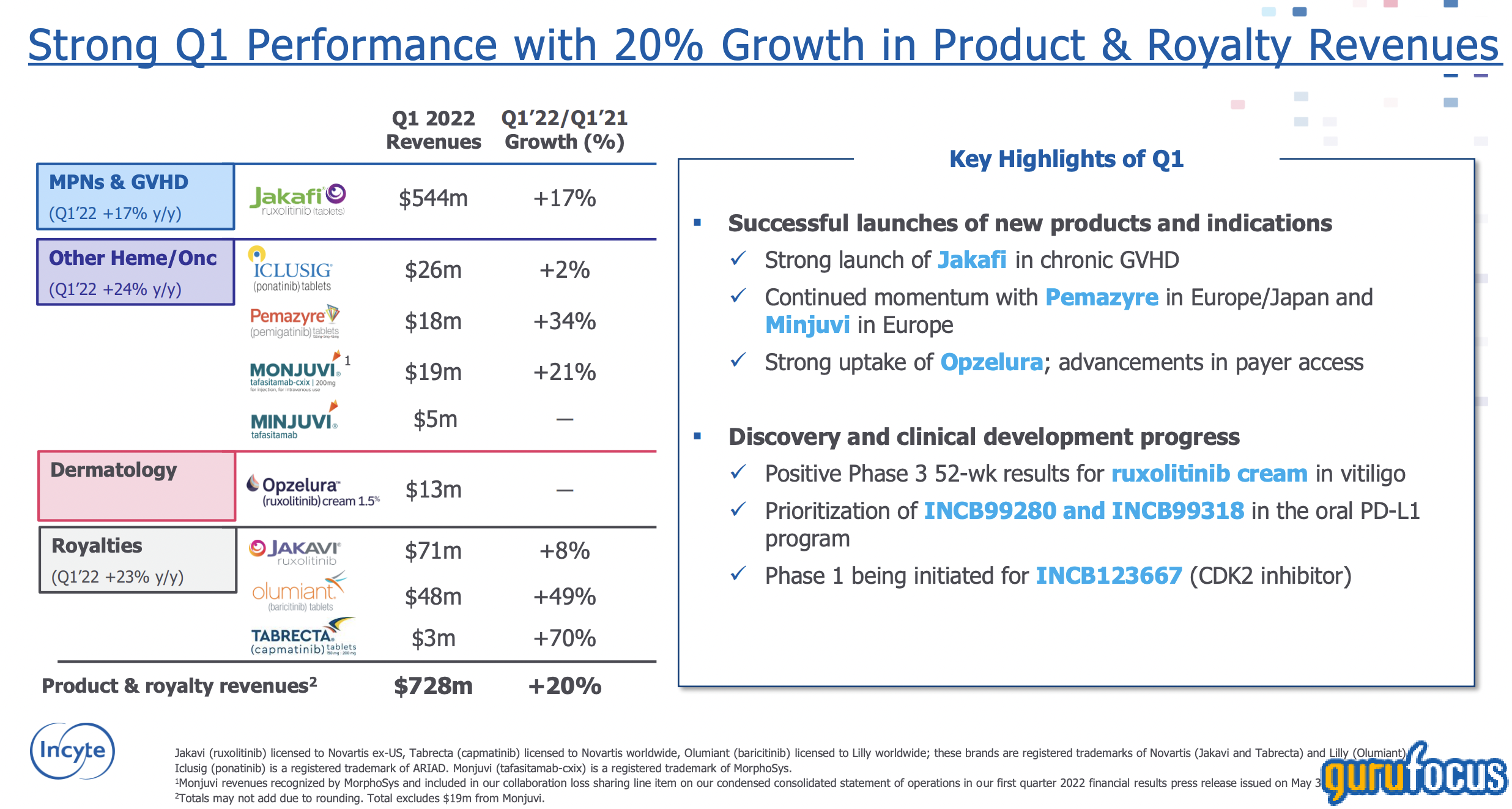 The company reported “intense competition” in its drug discovery, development and commercialization activities. Its competitors include pharmaceutical and biotechnology companies, academic and research institutions as well as government agencies. In particular, it points to fully integrated pharmaceutical companies.

One company offers an alternative to JAKAFI for Myelofibrosis patients: Bristol-Myers Squibb (

BMY, Financial) subsidiary Celgene, which won approval from the Federal Drug Administration for fedratinib (Inrebic) in 2019.

The key area of strength for Incyte that investors are overlooking is how it got rid of its debt. In its 2017 annual report, the company made only one reference to this significant change: “We also greatly improved our balance sheet this year with the retirement of over $700 million of convertible debt and a year-end balance of cash, equivalents, and marketable securities of $1.2 billion.”

This wording raises a red flag that the company may have eliminated its debt with massive share issuances, but as the chart below shows, that was not what happened: 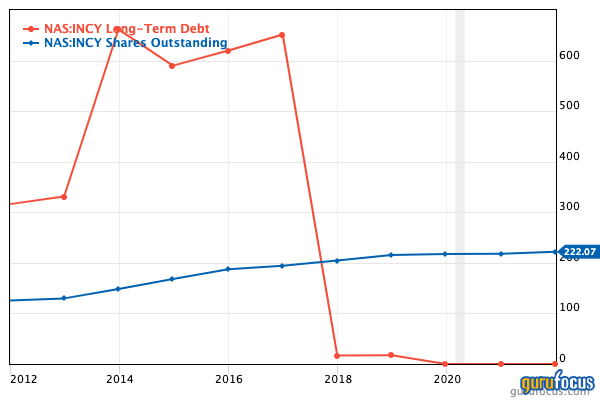 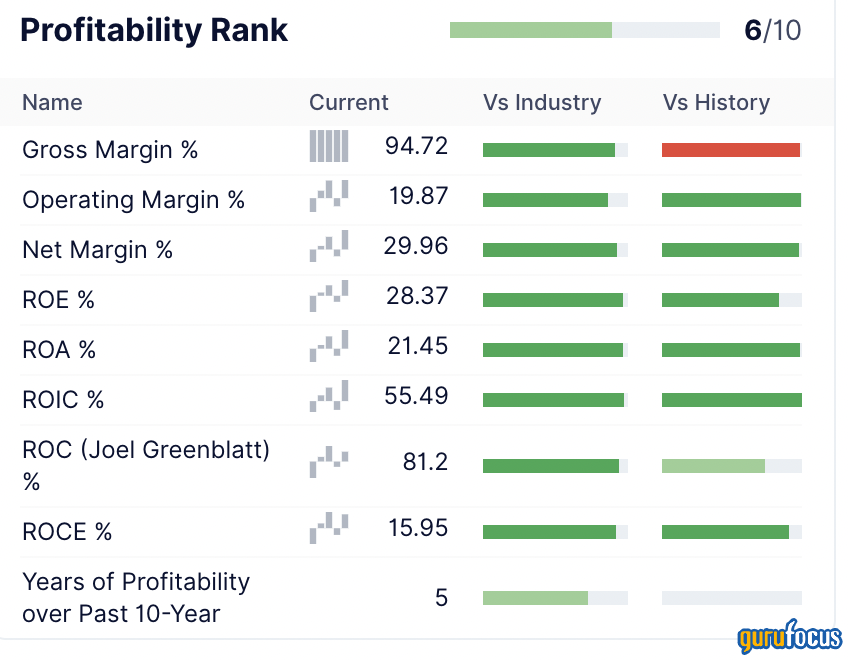 Given these criteria, it comes as no surprise that the overall profitability ranking for Incyte is not as strong as first suspected from things like high operating margins and returns on capital.

In terms of growth, the company posted the following per-share growth rates:

Incyte does not pay a dividend, and the number of outstanding shares has grown an average of 1.2% each year for the past three years. 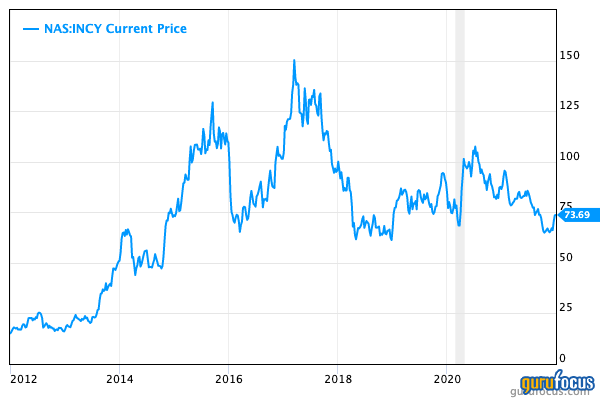 The GF Value chart now considers the stock to be significantly undervalued: 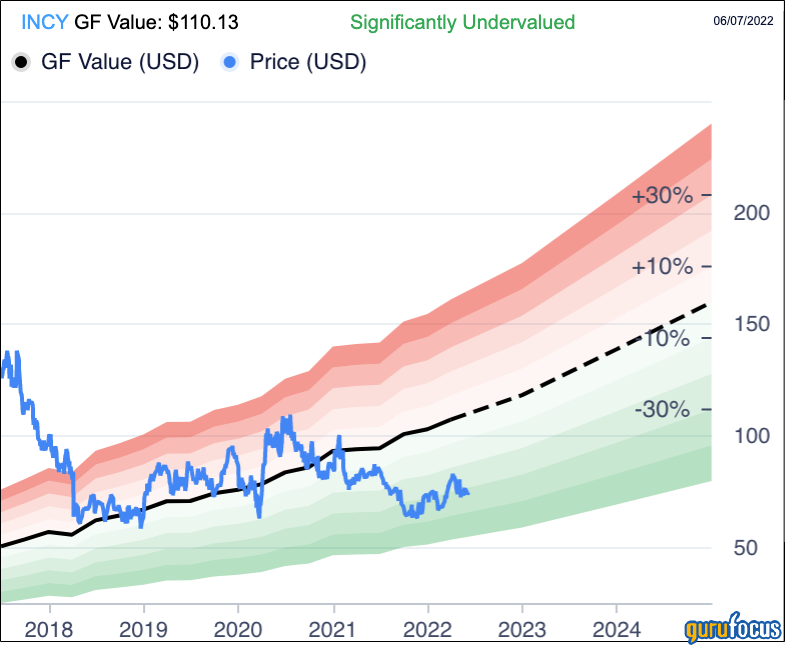 When we see the words “significantly undervalued," we should always ask a follow-up question: “Is this stock a value trap?” Is the market telling us this stock has no future?

That seems unlikely, in my opinion. This is a company with significant revenues and earnings. Its principal drug is a market leader and brings in more than half a billion a year in revenue. Its pipeline also has good potential, with multiple new or recent drugs.

Perhaps the strongest argument against it being a value trap is its lack of debt. Inability to pay interest or repay principal is the most common cause of corporate death (or should we call it suicide?).

Incyte’s price-earnings ratio is 17.59, which is better than 68% of the 281 companies in the biotechnology industry. The PEG ratio would be unreliable because of the wide variation in Ebitda growth over the past five years. Its one-year growth rate is 5.5% while the three-year growth rate is 52.70%.

GuruFocus research has found that stocks with higher GF Scores are “closely correlated to the long-term performances of stocks." Incyte earns an 83 out of 100 for its GF Score, so it is a strong, but not a top-rated stock: 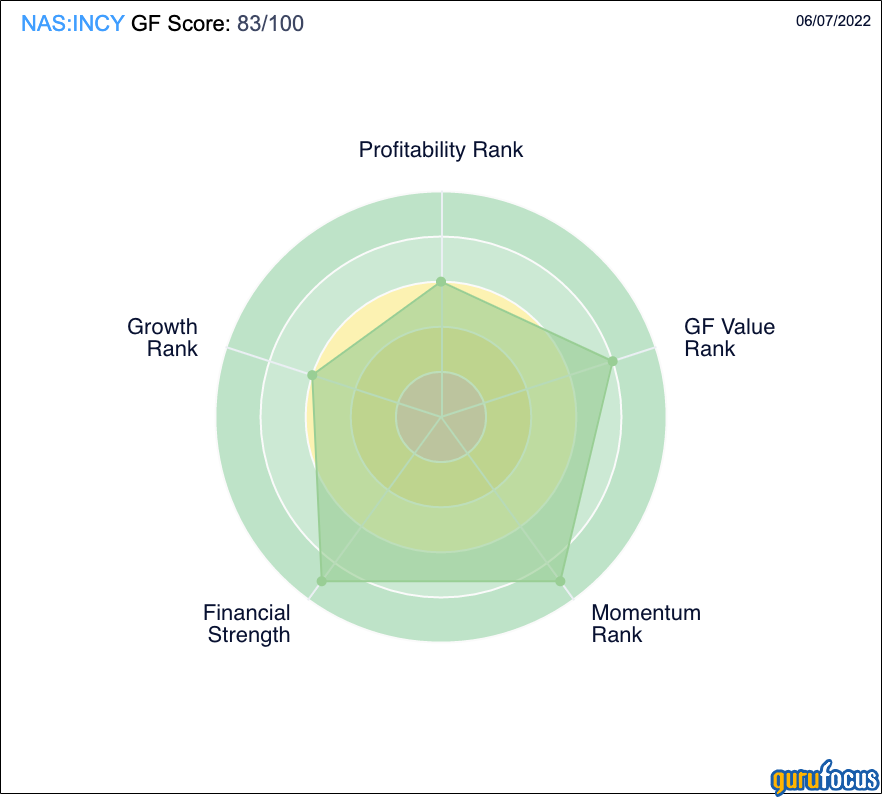 Eleven gurus own shares of Incyte; the three with the largest holdings at the end of the first quarter were:

Could Incyte could be a value stock? With no debt and a significantly undervalued price by several metrics, as well as a strong product family and pipeline, I do indeed believe this is the case.