Pharma consultant says the two companies are on an even par

That is based on comments by pharma consultant Evaluate, which declared the latter is every bit as good as the former at a fraction of the price. As of the time of writing, San Diego-based Fate has a market valuation of more than $2.3 billion compared to Nkarta’s approximately $724 million.

The gap was even greater before San Francisco-based Nkarta announced test results from phase 1 studies last month showing that its Car-NK therapy works at least as good as Fate’s – and may be safer. That is certainly good news for shareholders, but keep in mind the drug has to jump through several hoops before it hits the market—if it ever does.

We will know more later this year when Nkarta presents additional data from clinical trials of its two Car-NK candidates.

According to MD Anderson, natural killer cells – or NK cells – are part of our immune system. They patrol our bodies for abnormal cells like cancer and destroy them. But cancer cells can make themselves invisible, making it much more difficult for NK cells to find them and do their job. Car-NK drugs are designed to strengthen the cancer-fighting effectiveness of NK cells. 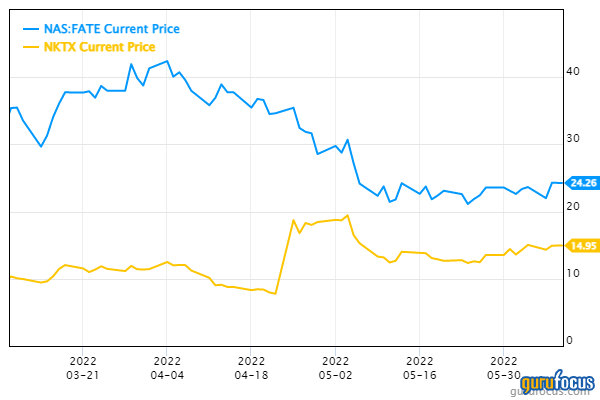 Just a day after reporting positive results from its clinical trial, Nkarta raised $230 million in a public offering of common stock, giving the company a bankroll that will sustain its operations through 2025, the company said in a news release. We should know well in advance of then whether the biopharma’s therapies are winners or not.

With more than $640 million in the bank, Fate’s balance sheet is solid. In the first quarter, the company took in more than $18 million from partnerships with Johnson & Johnson’s (

Both Nkarta and Fate have been mentioned in the past as potential takeover targets. Others developing NK cell therapy drugs that can be had for far less than Nkarta and Fate include Innate Pharma S.A. (