Sydnee Gatewood
Jun 09, 2022
Bookmark
Summary
Catherine Wood (Trades, Portfolio), the founder, chief investment officer and CEO of ARK Investment Management, has made a name for herself through investing in “disruptive innovation” stocks.

Implementing an iterative process that combines top-down and bottom-up research, the New York-based firm seeks to invest in companies that may benefit from cross-sector innovations like artificial intelligence, robotics, energy storage, DNA sequencing and blockchain technology.

It does not appear ARK Invest is doing well so far this year either as its top 20 holdings are all in the red. 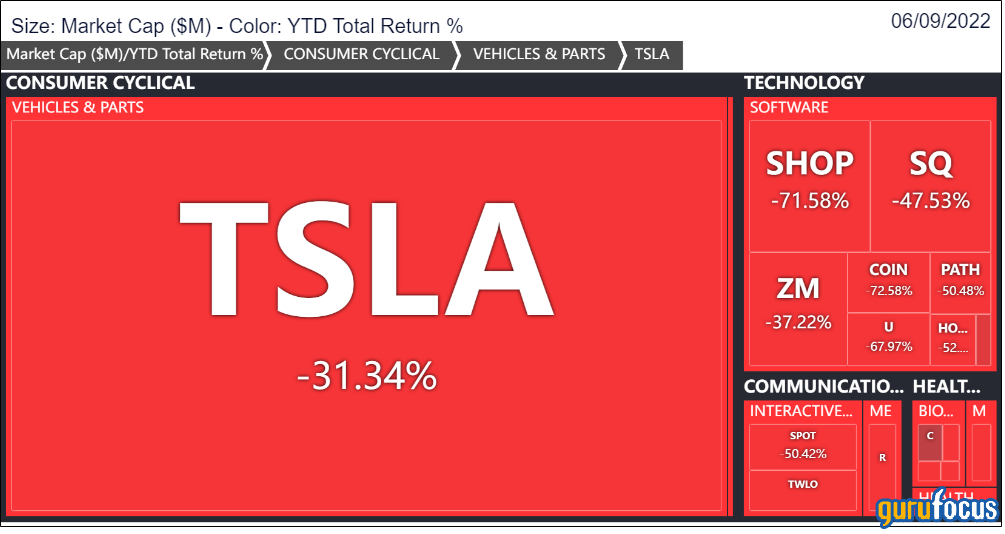 As of the end of the first quarter, the health care sector had the largest representation in Wood’s $23.95 billion equity portfolio with a weight of 35.25%.

The sector as a whole has underperformed year to date, declining 38.74%. 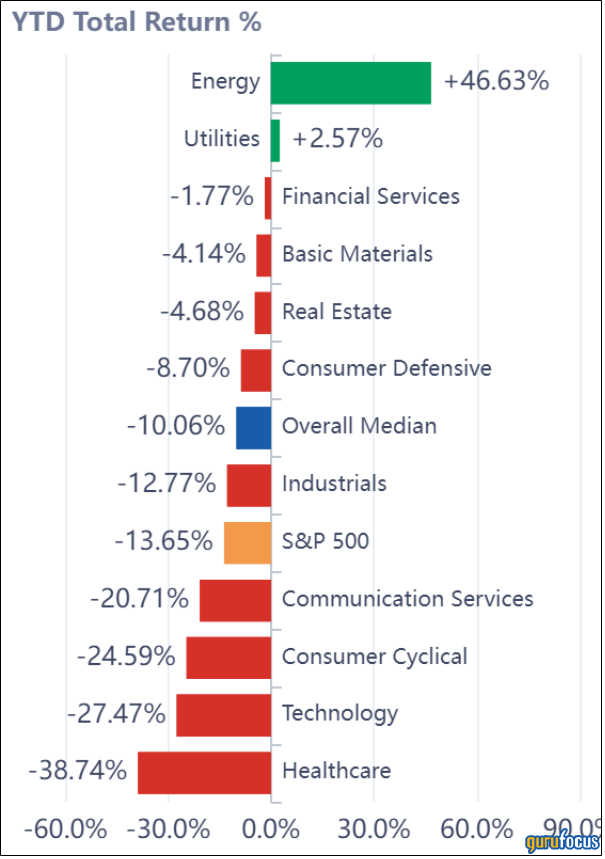 In the first quarter, Wood boosted her stake in Teladoc Health (

TDOC, Financial) by 2.88% to 19.46 million shares. The position accounts for 5.86% of the equity portfolio and is the second-largest holding overall. GuruFocus estimates she has lost 80.30% on the investment so far.

The Purchase, New York-based telemedicine company has a $5.71 billion market cap; its shares were trading around $34.86 on Thursday with a price-book ratio of 0.63 and a price-sales ratio of 2.63.

The GF Value Line suggests the stock, while undervalued, is a possible value trap currently based on historical ratios, past financial performance and future earnings projections. As such, potential investors should do thorough research before making a decision. 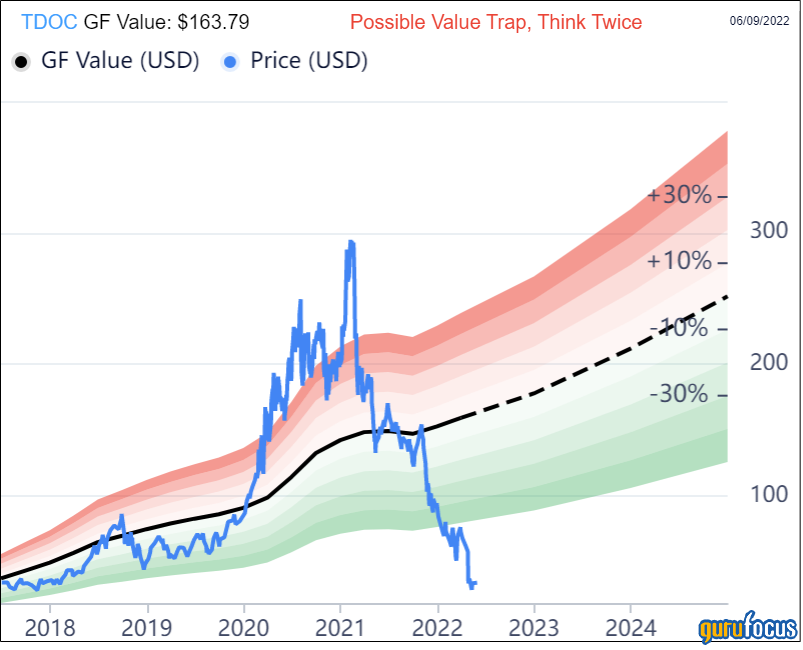 Teladoc’s financial strength and profitability were both rated 4 out of 10 by GuruFocus. The low Altman Z-Score of -1.01 warns the company could be at risk of bankruptcy as assets are building up and revenue growth is slowing down.

Although the company’s operating margin is expanding, its returns on equity, assets and capital are negative and underperforming versus competitors. Teladoc is supported by a moderate Piotroski F-Score of 5 out of 9, though, meaning conditions are typical for a stable company.

Of the gurus invested in Teladoc, Wood has the largest stake with 5.86% of its outstanding shares.

The guru increased her stake in Exact Sciences (

EXAS, Financial) by 6.13% during the quarter to 14.32 million shares, which represent 4.18% of the equity portfolio and is her sixth-largest holding. GuruFocus data shows Wood has lost an estimated 58.96% on the investment since the third quarter of 2020.

The molecular diagnostics company headquartered in Madison, Wisconsin, which specializes in the detection of early stage cancers, has a market cap of $8.71 billion; its shares were trading around $46.31 on Thursday with a price-book ratio of 2.67 and a price-sales ratio of 4.61.

According to the GF Value Line, the stock, while undervalued, is a possible value trap currently.

GuruFocus rated Exact Sciences’ financial strength 4 out of 10 on the back of a weak Altman Z-Score of 1.05, which warns it could be at risk of bankruptcy. The company may also be becoming less efficient since assets are building up at a faster rate than revenue is growing.

The company’s profitability scored a 3 out of 10 rating. While the operating margin is expanding, negative returns underperform a majority of industry peers. Exact Sciences also has s a low Piotroski F-Score of 3, meaning business conditions are poor. Despite recording a slowdown in revenue per share growth over the past 12 months, it still has a predictability rank of one out of five stars. GuruFocus data shows companies with this rank return an average of 1.1% annually over a 10-year period.

With an 8.23% stake, Wood is Exact Sciences’ largest guru shareholder.

The investor upped her Intellia Therapeutics (

NTLA, Financial) stake by 13.44% during the quarter. She now holds 8.9 million shares, which account for 2.73% of the equity portfolio. GuruFocus says Wood has gained an estimated 75.51% on the investment so far.

The Cambridge, Massachusetts-based biotech company, which develops biopharmaceuticals using the CRISPR gene editing system, has a $3.94 billion market cap; its shares were trading around $51.06 on Thursday with a price-book ratio of 4.09 and a price-sales ratio of 99.41. 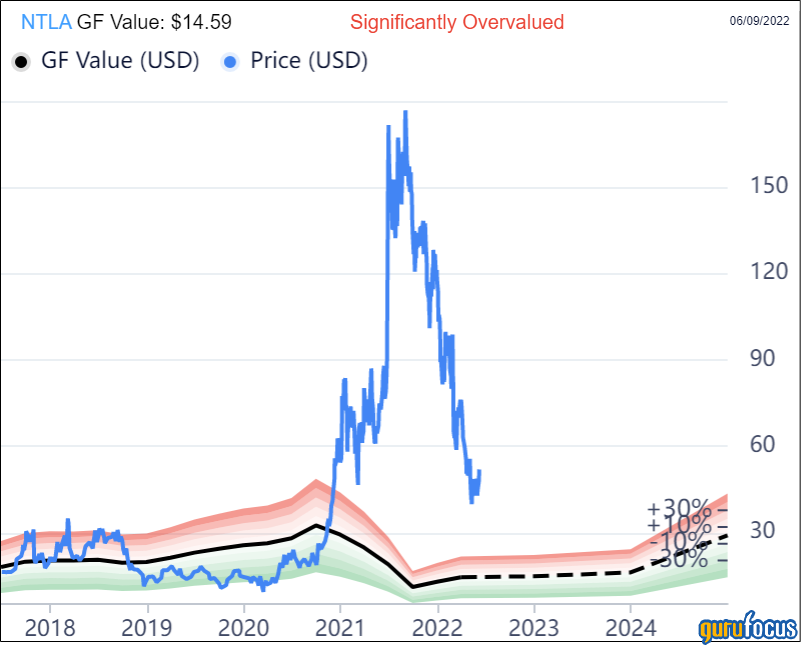 Intellia’s financial strength was rated 7 out of 10 by GuruFocus, driven by a comfortable level of interest coverage and a high Altman Z-Score of 7.57 that indicates it is in good standing even though the Sloan ratio is indicative of poor earnings quality and revenue per share has declined in recent years.

The company’s profitability did not fare as well, scoring a 1 out of 10 rating on the back of a declining operating margin and negative returns that underperform a majority of competitors. Intellia also has a low Piotroski F-Score of 2.

Wood is Intellia’s largest guru shareholder with a 12.03% stake. Other guru investors are

Wood added 3.48% to her CRISPR Therapeutics (

CRSP, Financial) stake in the most recent quarter. Representing 2.46% of the equity portfolio, she now owns 9.4 million shares. GuruFocus estimates she has gained 23.75% on the investment so far.

The Swiss biotech company, which develops gene-based medicines to treat serious diseases using its proprietary CRISPR/Cas9 platform, has a market cap of $5.72 billion; its shares were trading around $73.11 on Thursday with a price-earnings ratio of 20.41, a price-book ratio of 2.54 and a price-sales ratio of 6.47.

The GF Value Line suggests the stock is, while undervalued, a possible value trap. As such, potential investors should be cautious before making a decision. 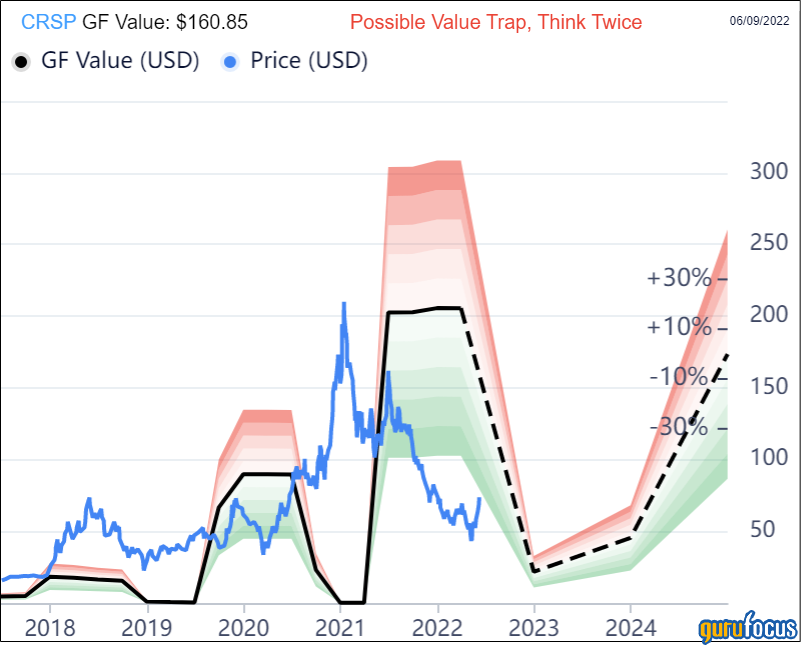 GuruFocus rated CRISPR Therapeutics’ financial strength 8 out of 10. In addition the a comfortable level of interest coverage, the company has a robust Altman Z-Score of 10.42, indicating it is in good standing despite assets building up at a faster rate than revenue is growing. The Sloan raito is also indicative of poor earnings quality. The return on invested capital also overshadows the weighted average cost of capital by a wide margin, meaning value is being created as the company grows.

The company’s profitability did not fare as well with a 3 out of 10 rating even though its margins and returns outperform a majority of industry peers. CRISPR also has a moderate Piotrsoki F-Score of 6.

Of the gurus invested in CRISPR Therapeutics, Wood has the largest stake with 12.20% of its outstanding shares. Simons’ firm, Jones,

John Hussman (Trades, Portfolio) and Stahl also have positions in the stock.

The guru increased her Beam Therapeutics (

BEAM, Financial) stake by 2.72% to 8.2 million shares. The stock represents 1.96% of the equity portfolio. GuruFocus data shows Wood has lost an estimated 53.33% on the investment since the fourth quarter of 2020.

The biotech company headquartered in Cambridge, Massachusetts, which also develops medicines based on gene editing technology, has a $2.82 billion market cap; its shares were trading around $38.11 on Thursday with a price-book ratio of 3.38 and a price-sales ratio of 45.40.

The price chart shows the stock has climbed around 100% since its initial public offering in February of 2020. 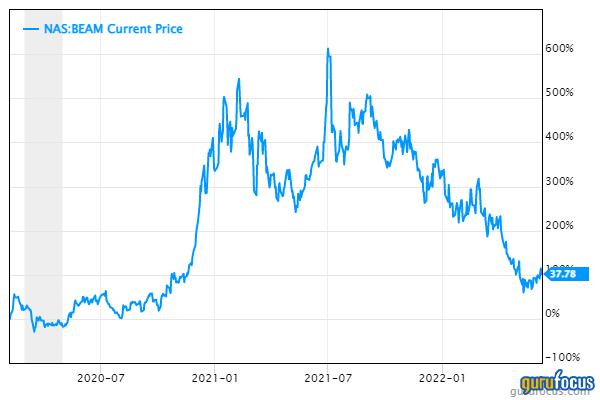 Beam’s financial strength was rated 5 out of 10 by GuruFocus. In addition to underperforming debt-related ratios, the Altman Z-Score of 2.25 indicates the company is under some pressure.

The company’s profitability scored a 2 out of 10 rating on the back of negative margins and returns that are underperforming versus competitors. Beam is supported, however, by a moderate Piotroski F-Score of 6.

With an 11.93% stake, Wood is Beam’s largest guru shareholder. Cohen,

Baillie Gifford (Trades, Portfolio) and Jones also own the stock.

Additional holdings in the tech space

Other health care stocks Wood owned as of the end of the first quarter included Fate Therapeutics Inc. (