What DiDi's Delisting Means for Investors

DIDI, Financial), the largest ride-hailing company in China, debuted on the New York Stock Exchange on June 30, 2021 to much fanfare and media attention. The excitement was short-lived, however, as just two days later, Chinese authorities opened a cybersecurity probe into the company and removed its app from the app store.

The stock took a dive on the news, tumbling over 48% in the weeks to follow. 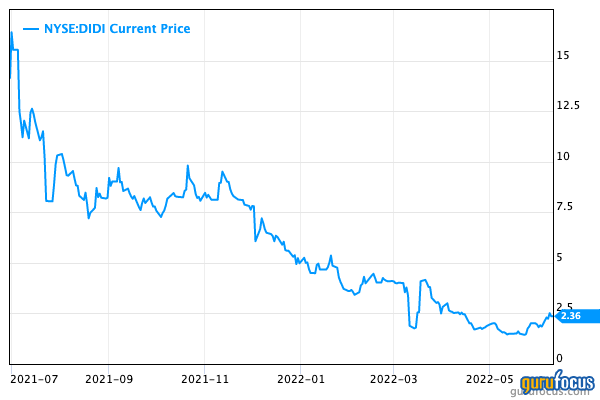 DiDi has also been investigated by the State Administration for Market Regulation in China for alleged antitrust violations.

Let us dive into the backdrop for Chinese stocks and what this delisting means for investors.

Chinese regulators have been cracking down on technology companies for some time now. E-commerce giant Alibaba Group Holding Ltd. (

BABA, Financial) came under intense scrutiny by the Chinese government and was even fined $2.8 billion in 2021 in a landmark antitrust case. When investing in China, the risk of the government or regulators interfering is always there.

Two other Chinese companies that were listed on the New York Stock Exchange at the same time, Kanzhun Ltd. (

BZ, Financial) and Full Truck Alliance Co. Ltd. (YMM, Financial), also had their apps removed from the app stores and were prevented from signing up new customers.

UBER, Financial) of China” had a very popular IPO and was even featured on CNBC’s “Mad Money” with Jim Cramer who gave brave advice to retail investors “I would try to get as many shares as I can”. Now although I don’t believe Jim Cramer meant any harm by his words, the risk for Chinese stocks is always there and every investment decision should ultimately be your own.

What does this mean for investors?

The “Uber of China's" very popular IPO was featured on CNBC’s “Mad Money” with Jim Cramer, who advised retail investors to “try to get as many shares as I can.” While I do not believe Cramer meant any harm by his words, the risk for Chinese stocks is always there and every investment decision should ultimately be your own.

If you are an investor in DiDi, you are probably feeling confused, frustrated and maybe even a little angry. Regardless, I would say it is best not to panic. Stay calm and know that you are in a similar boat to many other investors. Shareholders even voted on the stock to be delisted from U.S. exchanges after the Chinese authorities said they would not add the app back onto the app store until this was done.

The good news is DiDi plans to list on the Hong Kong Stock Exchange and allow existing shareholders to convert their holdings. The company stated the shares will convert to “freely tradable shares” on another “international exchange.”

The company is still under investigation by Chinese regulators and its recent proposal to secure its data was rejected. This means timescales are unknown currently, so it could be many months before we see the stock list in Hong Kong. The “DiDi Stock Disaster,” as I called it on my YouTube channel, could also force institutional investors to have to sell the stock once delisted from the NYSE. A positive is the shares may be available for trading on an over-the-counter pink sheet exchange in New York.

According to wealth manager Tariq Dennison of GFM Asset Management, "Going OTC is really not that big a deal, what it means is [just] it no longer trades on an exchange and there is no central place for price discovery. Many institutions probably won't care, because if they want to buy a million shares of DiDi, they will find a way to do it."

"Some retail investors may notice a difference... [because] some brokerage platforms don't do OTC at all because it is just too difficult for them and they just want to deal with the exchanges," he said.

However, it should be noted trading volume is usually lower for pink sheet stocks.

A business behind every stock

Often when a stock crashes, investors forget that a real company is behind it. DiDi is still a great company as it is the dominant ride-hailing service in China, has 493 million annual active users and employ approximately 13 million annual active drivers. It also offers food delivery, intra-city freight and is even working on autonomous driving.

The company is also in talks with state-backed Sinomach Automobile to purchase a third of its electric vehicle unit. This shows the company is focused on the future, and a relationship with a state-backed EV maker should improve the company’s chances of relisting in Hong Kong.

DiDi's share price is disconnected from company fundamentals, mainly due to the uncertainty surrounding listing, fines and its app in China. However, I believe the Chinese government does not want to destroy the business, but instead just let it know who is boss.

Of course, shareholders of DiDi have been caught in the crossfire, which is a real risk when investing in China. The good news is a listing on the Hong Kong Exchange or over the counter should free up liquidity and allow trading again. Once this happens, I expect the stock will remain depressed for some time before making a comeback.