NU, Financial), or Nubank, is a fintech company disrupting the banking oligopoly in Brazil. It is also starting to do the same in other big Latin American countries, including Mexico and Columbia. Warren Buffett (Trades, Portfolio)'s Berkshire Hathaway (BRK.A, Financial)(BRK.B, Financial) invested about $250 million in the company's initial public offering in December of 2021 at $9 per share. The conglomerate also invested $500 million in the Brazilian fintech earlier in the year.

Nu's stock has fallen more than 50% since its IPO, but the future of the bank looks bright.

Nu Holdings provides digital banking services and credit cards in Brazil, its main market, as well as Mexico and Colombia. Latin America is much more underbanked than more developed parts of the world, so Nu, as a disrupter, is attempting to capture a large share of the market. 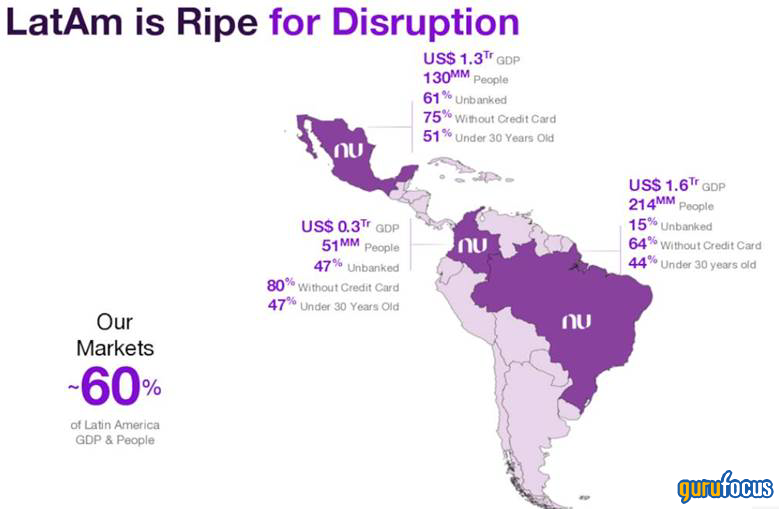 Nu Holdings was founded in 2013 by David Velez Osorno, a former partner of venture capital firm Sequoia Capital (which had backed companies like Apple (

AAPL, Financial) and Alphabet's (GOOG, Financial)(GOOGL, Financial) Google when they were starting out). Sequoia Capital has backed Nu and is its largest shareholder. Notably, Berkshire rarely invests in IPOs and for it to invest in Nu, would mean they saw something specially good.

When the company was founded, Osorno realized how poorly the bulk of Brazilian citizens were served by banks, which had poor accessibility and high fees. These left vast swaths of the population unbanked or poorly served.

Previously, banks relied heavily on branches. As such, Nubank introduced a branchless product that customers could only access through their credit card using their smart phones. The company was created originally as a payment solution, so Nubank relied on its ability to get funds using its lightweight model to grow its customer base. The company invested in customer service, where others had to invest in physical branches.

This method appears to have worked as between 2019 and 2021, Nubank saw tremendous growth, enabling more services to be offered to customers and diversifying its offerings. More services and more customers led to more usage and more compounding, which continues to accelerate. 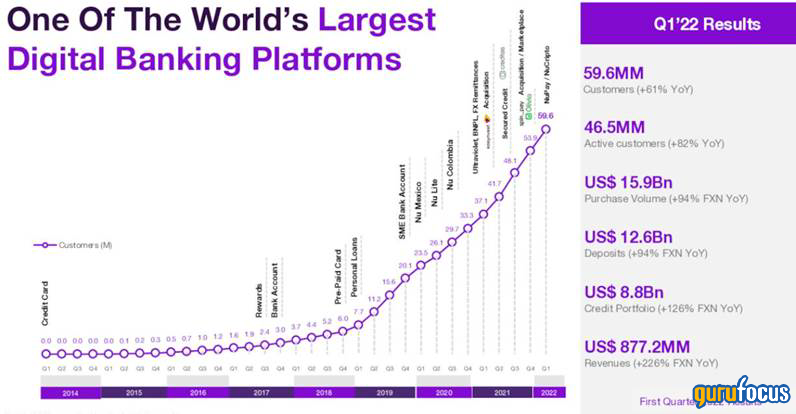 The following chart shows the growth of Nubank's revenue and net income on a quarterly basis since IPO. While it is still running at a loss, the-top line growth is spectacular, and the loss is gradually declining. If the current growth continues, Nubank should be solidly profitable in a couple of years. 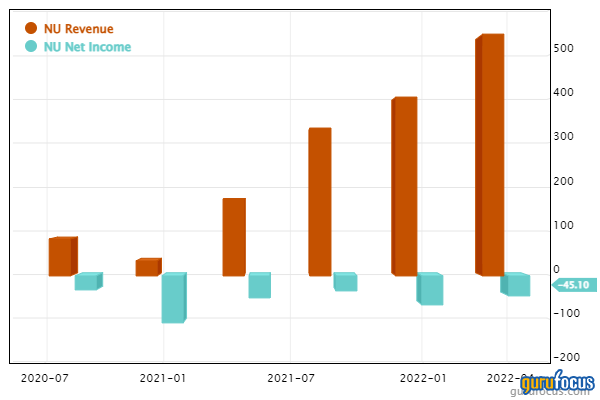 Behind the scenes, the banking regulations in Brazil have changed to be more modernized, including the implementation of open banking information standards and implementation of a country wide money transfer system called Pix, bringing more competition to a historically highly concentrated sector – one with high service tariffs and limited access to financial services and availability to a large portion of the population. This has given a huge opportunity for disrupters like Nubank. It should be noted that apart from Nubank, a host of other fintech disrupters have appeared, so legacy banks are also starting to fight back. As such, this is not going to be a cake walk, but brutal hand-to-hand combat for market share.

The current market drawdown has arguably given investors a wonderful opportunity to own Nu Holdings, which has a differentiated business model in Latin America. We can ride on the coattails of one of the greatest investors in the world, who knows banks very well, as well as get in relatively early on Nu's journey to riches at half the IPO price.