While the stock market continues to be pummeled, one Dow Jones company seems to be holding its own. In the past month, shares of pharma giant Merck & Co. Inc. (

MRK, Financial) have been flat while the Dow is down nearly 5% and the Dow U.S. Pharmaceutical Index has sunk about 6%.

Merck’s staying power may be attributable to its emergence as a key player in the large and growing market for cancer drugs. The company has come from the back of the pack to a leadership role in great part due to its oncology treatment Keytruda, which recently recorded its millionth patient and could double that figure by 2024, the company said at the recent American Society of Clinical Oncology meeting.

It gets even better. Merck said it could receive 80 approvals for its cancer drugs in the next six years. That comes on top of the 46 approved indications, most of which are for Keytruda, enabling the medication to overtake AbbVie Inc.’s. (

ABBV, Financial) Humira as the best-selling drug in the world, tallying more than $17 billion last year.

Merck's management is likely thinking ahead to 2028, when Keytruda loses patent protection. In addition to the oncology drugs being developed in-house, the company may again go the acquisition route to bolster its offerings. And the company plans to be aggressive, even after forking over $11.5 billion to buy cardiovascular specialist Acceleron late last year.

Maybe Merck will share more of its plans during today’s presentation at Goldman Sachs Group Inc.'s (

One of the names that have been rumored to be on Merck’s radar is Mirati Therapeutics Inc. (

MRTX, Financial), which is a whole lot cheaper than it was at the beginning of the year after its market cap has been sliced by about a third to just more than $3 billion. 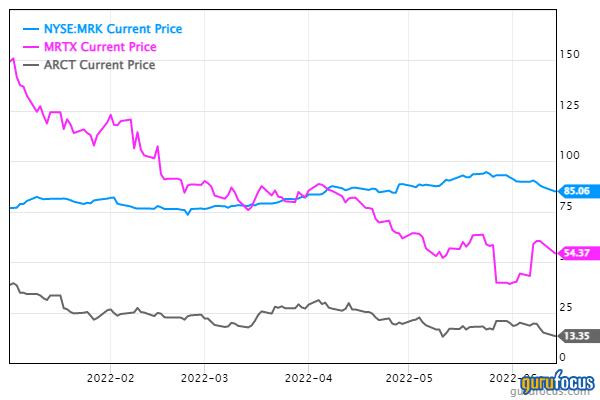 Earlier this year, the San Diego-based oncology company submitted an application to the Food and Drug Administration for the use of adagrasib to treat patients with non–small cell lung cancer whose tumors have a type of genetic mutation called a KRAS. Adagrasib would give Merck a worthy competitor to the Amgen Inc. (

ARCT, Financial), which is not working in the cancer arena, but is instead developing a lipid nanoparticle delivery system for genetic materials, with a pipeline covering vaccines for Covid and influenza, as well as drugs for cystic fibrosis and liver disease.

Arcturus can also be had for a bargain-basement price owing to the two-thirds decline in its share price this year, giving the company a market value of an easily digestible $354 million.