Ferrari Is Racing Ahead

Enzo Ferrari once said, “I am an agitator of men.”

I am a man and I certainly get agitated when I see a Ferrari. It may be the only brand or company I really care about, so I must be careful of potential cognitive bias when thinking about Ferrari NV (

An objective way to think about any company is to look at its valuation. The GF Value rates Ferrari as modestly undervalued and the company also scores well in two metrics that I deem important. It has a Piotroski F-Score of 6, which is pretty good, and it has an excellent Altman Z-Score of 5.7. Its Formula 1 racing team, which is essentially its core marketing and technology development arm, after finishing last season in third place, is a performing well this season, currently in second place with a more competitive team than it has had for a long time. 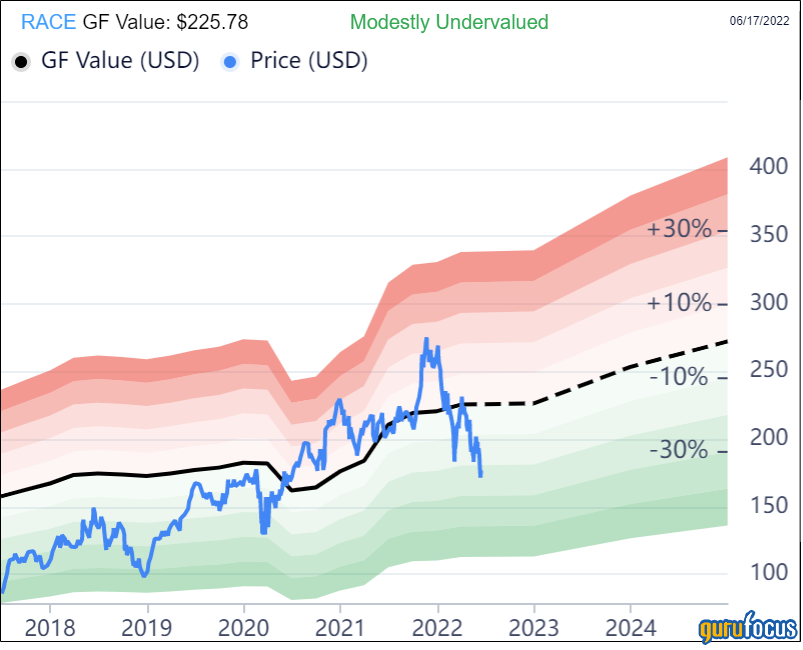 With these strong financial fundamentals in place, I was able to view Ferrari’s capital markets day, which was held in Maranello, Italy on Thursday, with the peace of mind that any bias I might have toward the company could be protected via solid fundamentals.

Ferrari is an interesting company. It is a most distinctive and innovative luxury company at its core. In fact, the Wall Street analysts that cover the company are split between automotive analysts and luxury analysts.

New CEO Benedetto Vigna, who joined the company in September 2021 and has 26 years of experience working at the heart of the semiconductor industry that is rapidly transforming the automotive sector, is well placed to accelerate Ferrari’s ability to pioneer the application of next generation technologies. He kicked off the capital markets day by discussing the “Ferrari DNA," which consists of:

These attributes are going to be dearly needed as the trends in the automotive industry are ripping up the playbook. Vigna said, “We are not a mobility company.” He also emphasized that Ferraris are not going to be shared among individuals as we head into a possible future of communal use. As mainstream auto companies gear their own futures toward mobility, owning a Ferrari will become even more exclusive. Vigna also ruled out building fully autonomous vehicles as these types of cars do not generate the personal, experiential and emotional characteristics the company is famous for.

There are six levels of driving automation according to SAE International (formerly the Society of Automotive Engineers): Levels 0 through 5. Vigna said Ferrari will limit the autonomy of its cars to L2/L2+ to preserve all the extraordinary emotions reserved for the driver. The company has no intention to go to Level 4 or Level 5 in its cars.

Ferrari does, however, intend to become more connected, making greater use of sensor technology to improve performance. But the most interesting aspect for me was the company does intend to go fully electric. Ferrari will unveil its first full electric car in 2025. In 2021, 20% of models were hybrid while 80% were traditional internal combustion engine cars. By 2030, Ferrari expects only 20% of its models to be of the internal combustion variety.

During the event, Ferrari's management was careful to acknowledge that most clients are petrolheads at heart, but were happy to move to hybrid once they were convinced the performance was better and the car was 100% Ferrari.

Management noted the fully electric Ferrari needs to have certain traits: it needs to be a true Ferrari, it needs unique features, it needs to have racing derived performance and exceptional handling. Additionally, to preserve the Ferrari experience, the electric engine will deliver a unique sound.

Additionally, management sees strong commonalities between internal combustion and electric engines: they are racing derived, they have precision mechanics, they use fluid-dynamics know-how for cooling and they make use of performance software.

Ferrari has committed to become Scope 1 and 2 carbon neutral by the end of 2030. To do this, it has set out an electric engine roadmap called Ferrari Law.

Another key differentiating element for Ferrari electric cars will be the way the battery cells – which will be purchased to ensure the highest quality and latest technology – will be assembled in Maranello. The handcrafted battery modules will be integrated into the chassis of cars in a process focused on reducing the weight of the vehicle, increasing the performance and creating the unique driving experience only a Ferrari can deliver. 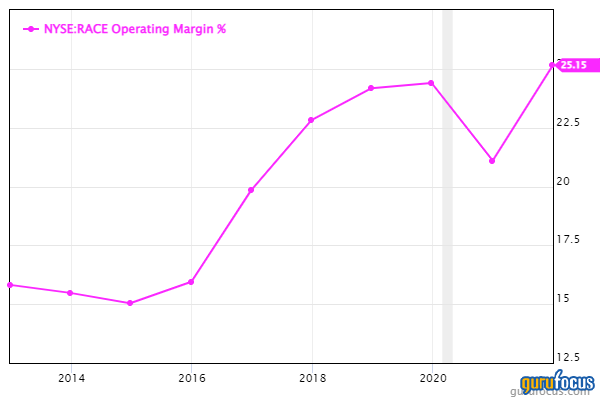 The company guided that its payout ratio will increase from 30% of the group’s adjusted net income last year to 35% from this year. Ferrari also intends to buy back about 2 billion euros ($2.09 billion) worth of shares by 2026, compared with 1.1 billion euros it has repurchased since 2018.

Management also said that its order book is at an all-time high. It is releasing a sporty SUV called the Purosangue, which will be unveiled in September. I must admit I was not happy that Ferrari was introducing an SUV model, but I was glad to hear production will be quite limited. The plan is that it is another model in a specific range of models, rather than the company trying to sell one SUV to every existing Ferrari owner, given that probably most Ferrari clients do already own an SUV. This would probably damage the brand equity, which management is very cognizant of.

Ferrari has a very strong moat, given its heritage and the passion and loyalty customers have for it. Indeed, its business model practically guarantees it can always sell all its cars. The company calls its clients a family, but to buy higher prestige cars, you must be higher up in the family hierarchy, meaning you have bought many previous models. Thanks to its exclusivity (only 11,000 cars were produced in 2021), it means Ferrari management can be confident the Purosangue will sell out. Management also hinted they were confident the company would easily presell its entire production of the Purosangue, as has often been the case with new models. Indeed, management said the problem they have is meeting the customer demand as quickly as possible. Given Ferrari takes large down payments, this also helps with cash flow.

This ties in with another quote by Enzo Ferrari, when he said, “Ferrari will always deliver one car less than the market demand.” But realistically, it is not one less car they produce compared to market demand, it is probably thousands.

“A Ferrari is forever” was quoted a few times during the capital markets day presentation. It struck me that while they meant this literally, the marketing strategy is a bit like the diamond industry’s. A lady does not need a diamond, but she most probably wants one. Similarly, a gentleman (and Ferrari, interestingly, often referred to its customers as male), does not need a Ferrari, but he certainly wants one.

Ferrari looks well placed to meet the changing trends in the luxury and automotive markets. It has strong environmental, social and governance commitments (it already scores B on climate from CDP) and thanks to its racing and hybrid track record, the gradual transition to electric vehicles, while not easy, looks achievable.

It is also a big moment for the electric vehicle trend, too. While Tesla (TSLA) cars look alright and might drive fine, a Tesla just is not a Ferrari. When the creator of the world’s most beautiful and technically advanced cars commits to an electric future, it bodes well for the future of EVs overall, as technology and design can trickle down.