Biotech's stock up more than 16% on Friday

SGEN, Financial) climbed more than 16% to about $170 on Friday as investors piled into the stock on rumors the company was being eyed by Merck & Co. Inc. (MRK, Financial). A deal seems to make sense given the two pharmaceutical companies have been partners since 2020. That’s when Merck acquired 5 million shares of Bothell, Washington-based Seagen for $1 billion and $600 million upfront for its antibody drug conjugates.

With a market cap of $31 billion, Seagen will not come cheap. But adding the 25-year-old biotech to its family would enable Merck to diversify a cancer drug business anchored by Keytruda, which has surpassed AbbVie Inc.’s. (

ABBV, Financial) Humira as the best-selling drug in the world with revenue of more than $17 billion last year.

Earlier this week, I reported Merck may be interested in acquiring Mirati Therapeutics Inc. (

MRTX, Financial), which has become a relative bargain since the beginning of the year, with its stock price plummeting by almost two-thirds to $56.40, giving it a valuation of one-tenth of Seagen.

Merck and Seagen have evidently been in discussions before about a deal, so this might just be another rumor without any teeth. In fact, the Wall Street Journal reported that Merck may opt for a less expensive marketing partnership.

Cost may be just one of the roadblocks in the way of a union. Some WSJ people think antitrust concerns could scuttle an acquisition as The U.S. Federal Trade Commission could look askance at the potential for product and pipeline overlaps that could stifle competition. 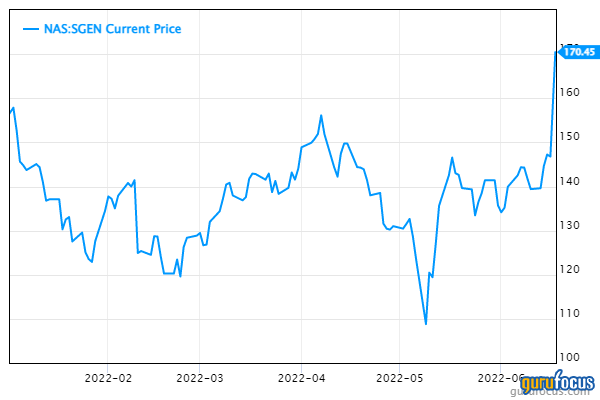 The possibility also exists that another suitor could swoop in, with speculation centering on Astellas Pharma (

ALPMY, Financial), which already has an agreement with Seagen on a bladder cancer treatment.

Merck said it could receive 80 approvals for its cancer drugs in the next six years. That comes on top of the 46 approved indications, most of which are for Keytruda, which loses patent protection in 2028, giving the company plenty of lead time to beef up its cancer offerings.

Seagen has been in the news lately for another reason, and not a good one. Co-Founder and CEO Clay Siegall recently resigned following his arrest on the charge of domestic abuse. Chief Medical Officer Roger Dansey, M.D., is acting as interim CEO while the company searches for a permanent replacement.