The stock looks cheap compared to the value of its assets

Every so often, Mr. Market throws up an opportunity that could be too good to miss. I think such an opportunity exists today with Berkshire Hathaway (

BRK.A, Financial) (BRK.B, Financial). Over the past couple of months, shares in Warren Buffett (Trades, Portfolio)’s conglomerate have plunged from more than $350 (for the Class B shares) to around $270. 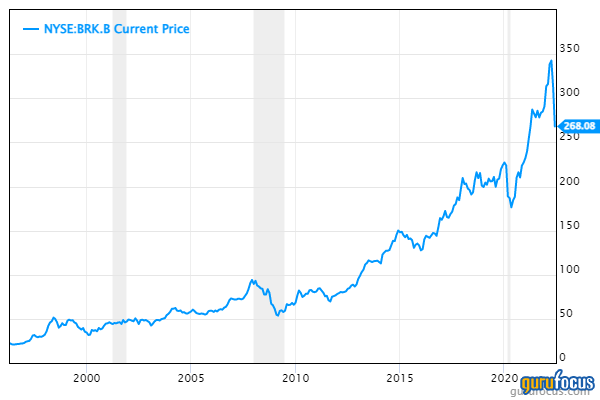 This might make sense if the company was overvalued to start with, or if its outlook were deteriorating as the economic environment becomes more uncertain.

However, based on all of the information we have available, neither of these two scenarios is playing out. The value of the firm’s giant equity portfolio might have fallen in recent months, but the rest of the business, the utilities, railroad and insurance side, are still firing on all cylinders.

None of Berkshire's major operational sectors are particularly exposed to inflationary forces. Utilities tend to hike prices in line with inflation every year, which is generally allowed by regulators. BNSF has a near-monopoly over certain railroad routes, which means it can hike prices to offset rising costs. Meanwhile, the insurance side of the business can hike prices as it sees fit. If customers don’t want to pay the higher price, they can move on. Berkshire does not have to lower its quote to keep the business.

Buffett discussed how Berkshire was coping with inflationary forces at the 2021 annual meeting of shareholders. “We are seeing very substantial inflation,” the billionaire said. “We are raising prices. People are raising prices to us and it’s being accepted,” he went on to add.

So, Berkshire is well-placed to cope with the current macro backdrop, and on that basis, I think the stock's recent decline is unjustified.

Putting a value on Berkshire

To come up with a value for the business, I’m going to use a sum-of-the-parts calculation compared to its current market capitalization, rather than the share price, due to the issues with converting between A and B shares.

At the time of writing, the company has a market capitalization of just under $600 billion. At the end of the first quarter, the group’s cash balance stood at $106 billion, down from $147 billion at the end of 2021 as Buffett deployed his capital. So, excluding this cash, the market is valuing the rest of the business at $497 billion.

According to the CNBC Buffett portfolio tracker, which shows the real-time value of Berkshire's equity positions, the group’s giant equity portfolio is currently worth in the region of $306 billion. That leaves $191 billion for the rest of the businesses.

Now on to the operating businesses. Last year, BNSF produced net income for the group of $6 billion. Peer Union Pacific (

UNP, Financial) is selling at 17.8 times forward earnings, suggesting a fair market value of $107 billion for BNSF as a standalone company.

Meanwhile, the utilities and energy division generated earnings of $4 billion last year. The average earnings multiple of the U.S. regulated utility sector stands at around 20 at the time of writing, implying this energy business could be worth as much as $80 billion as a standalone entity.

These two operating businesses, combined with Berkshire’s equity portfolio and cash pile, are worth a combined $599 billion (that’s assuming no earnings growth this year).

This valuation assumes Bekrshire’s insurance business and service businesses are worth just $1 billion. Based on the fact that these businesses produced net earnings of $4.2 billion in the first quarter alone, this severely undervalues the enterprise.

How much these businesses could be worth depends on how one wants to value them. However, we know that Buffett was happy for Berkshire to repurchase its stock at prices upto $322 per B share in March of this year.