With so much carnage in the stock market right now, investors are rushing to the exits trying to preserve what gains they have left. In a market-wide sell-off, stocks of all stripes get sold off, regardless of quality. This includes those in the health care sector, which typically have more consistent business performance even in economic downturns.

Investors looking for exposure to the health care sector might be interested in these three oversold health care stocks, as measured by the relative strength index, or RSI. Stocks with an RSI below 30 are considered to be oversold. According to technical criteria, these stocks are considered strong rebound candidates once panic selling concludes. Each of the health care stocks discussed in this article has an RSI in the low to mid-30s and offers a dividend yield of at least 1.8%, beating the market average.

First up is Abbott Laboratories (

ABT, Financial), which sells a wide variety of health care products around the world. The company has four segments: Diagnostic Products, Medical Devices, Nutrition Products and Established Pharmaceutical Products. Abbott Laboratories is valued at $180 billion and generated revenue of $43 billion in 2021.

Abbott Laboratories shares have fallen 27% since the start of the year and the stock recently closed close to a new 52-week low. This is a worse decline than the nearly 23% decline for the S&P 500 Index.

Aside from the weakness in the overall market, Abbott Laboratories has dealt with the challenge of recalls of certain baby formulas. This led to a plant shutdown in February, which has caused a nationwide shortage of baby formula. The plant was recently reopened, but had to be shut down again after severe storms flooded portions of the facility. The Nutrition segment fell 4.4% in the most recent quarter and represented 15.9% of total sales and 13.7% of U.S. sales for the period.

While the decrease in baby formula sales could be an issue in the near-term, Abbott Laboratories has long proven to be a very successful company, with revenue and earnings per share growing at compound annual growth rates (CAGRs) of 8.9% and 12.9%, respectively, since spinning off AbbVie Inc. (

Long-term performance has enabled the company to grow its dividend for decades. Abbott Laboratories has increased its dividend for 50 consecutive years and with a CAGR nearly 16% over the past nine years. Shares of the company yield 1.8%, just ahead of both the stock’s long-term average yield and the 1.7% yield of the S&P 500.

And, yet, despite a sound business model that has delivered decades of dividend growth, the stock has endured a steep sell-off since the start of the year. As a result, Abbott Laboratories has an RSI of 32.

In addition to being oversold, Abbott Laboratories is also trading at a discount to its GF Value. 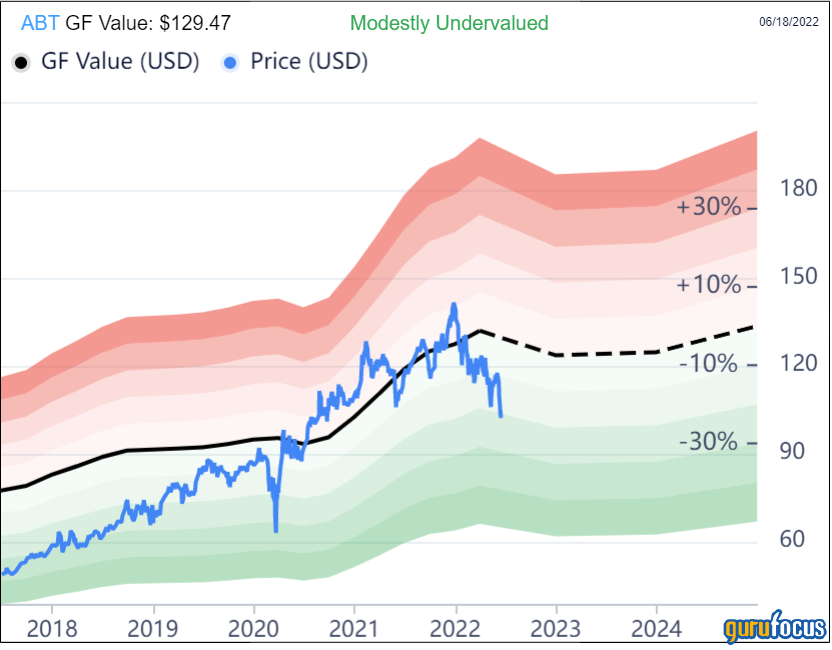 Next is Amgen Inc. (

AMGN, Financial), the largest independent biotech company in the world. The company provides treatment options in a variety of areas, including oncology, inflammation and cardiovascular disease. The company is valued at $125 billion and generated revenue of $26 billion last year.

Shares of Amgen have held up extremely well this year, with the stock rising nearly 5% year-to-date. On a more short-term basis, the stock has fallen almost 8% since May 31.

The company’s most recent quarter was solid with revenue growing nearly 6% and earnings per share topping analysts’ estimates. Amgen is seeing some declines in some of its top grossing products, including Enbrel and Neulasta, as they face fierce biosimilar competition. That said, the company continues to see double-digit growth rates in many of its key products, including Prolia and Repatha.

Since 2012, Amgen’s top-line has improved with a CAGR of 4.6%. Earnings per share, powered by aggressive share buybacks, and net profits have CAGRs of 11.4% and 7.6%, respectively, over this period.

Amgen began paying a dividend in 2011. The dividend has compounded at a rate of more than 19% per year over the last decade. Amgen’s 11-year dividend growth streak is likely to continue as the company has a projected payout ratio of 44% for this year, which isn’t too far off the five-year average payout ratio of 39%.

Even though the stock has greatly outperformed the S&P 500, Amgen’s decline over the last few weeks has caused the RSI to move lower. Amgen’s RSI reads close to 37, one of the lowest readings for the stock so far in 2022.

The GF Value chart shows the stock to be trading near its fair value. 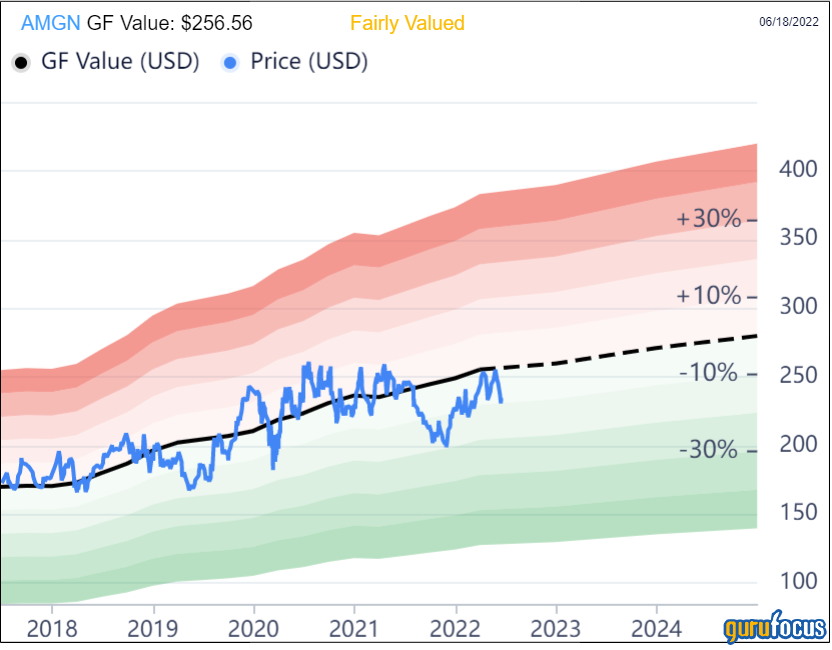 JNJ, Financial). The company currently has three business segments: pharmaceuticals, medical devices and consumer products. Johnson & Johnson announced in November of last year that it would be spinning off its consumer business into a standalone company. Johnson & Johnson is one of the largest companies in the world, with a market capitalization of $446 billion and annual revenue approaching $94 billion.

Shares of the company are essentially flat from the start of the year, but are lower by 7% since the end of April.

This is reflected in Johnson & Johnson’s results, both short-term and long-term. The last quarter showed mid-single-digit gains on both the top and bottom lines. The last decade has seen CAGRs of almost 4% and 7.5% for revenue and earnings per share, respectively, as Johnson & Johnson slowly and steadily sees its business grow. This has been the company’s story for decades.

With the decline over the past month or so, Johnson & Johnson now has an RSI of 35, near its lowest rating of the year.

The GF Value charts shows the stock to be fairly valued as of Friday. 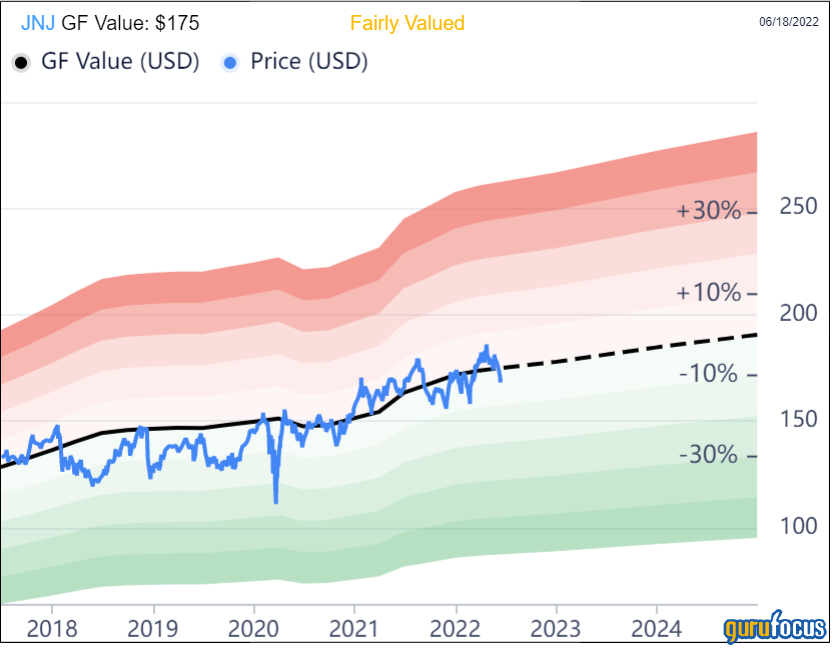 Johnson & Johnson closed the most recent trading session at $169.46. The GF Value is $175, implying a price-to-GF-Value ratio of 0.97. Reaching the GF Value would result in a 3.3% gain in share price. Combined with the dividend, total return potential could be in the mid-single-digits.

Mr. Market is currently tossing the baby out with the bathwater as investors sell stocks of all quality and types. The plus side of this is that many high-quality names now appear to be oversold using the relative strength index. An RSI approaching 30 is usually considered oversold, and by this criteria, Abbott Laboratories, Amgen and Johnson & Johnson are looking undervalued. If a rebound occurs, strong gains could be in the cards.

All three of these companies have sound business models and stocks that have a least 10 years of dividend growth, with Abbott Laboratories and Johnson & Johnson’s dividend growth streaks measuring in decades. Each stock is also trading at a discount to their GF Value, though some might prefer a further pullback before buying Johnson & Johnson due to the low total return potential.