Using quantitative and value-oriented methods, the guru and her team look for potential investment opportunities among mid- and large-cap companies. Each stock also receives a risk score based on the additional volatility or risk it adds to the portfolio. The investment team then enters positions in the stocks with the highest expected risk-adjusted return that also have a lower price-earnings ratio and higher dividend yield than the market.

As of the end of the first quarter of 2022, the energy sector had the sixth-largest representation in Ketterer’s $4.18 billion 13F equity portfolio with a weight of 4.29%. Investors should be aware that 13F filings do not give a complete picture of a guru’s holdings; they only consider the U.S.-based holdings and American depository receipts. Regardless, they can still provide valuable information.

Further, the energy space may offer value opportunities currently as the sector has gained 18.78% year to date on the back of higher inflation, rising gas prices, supply chain constraints and uncertainty surrounding the war in Ukraine. 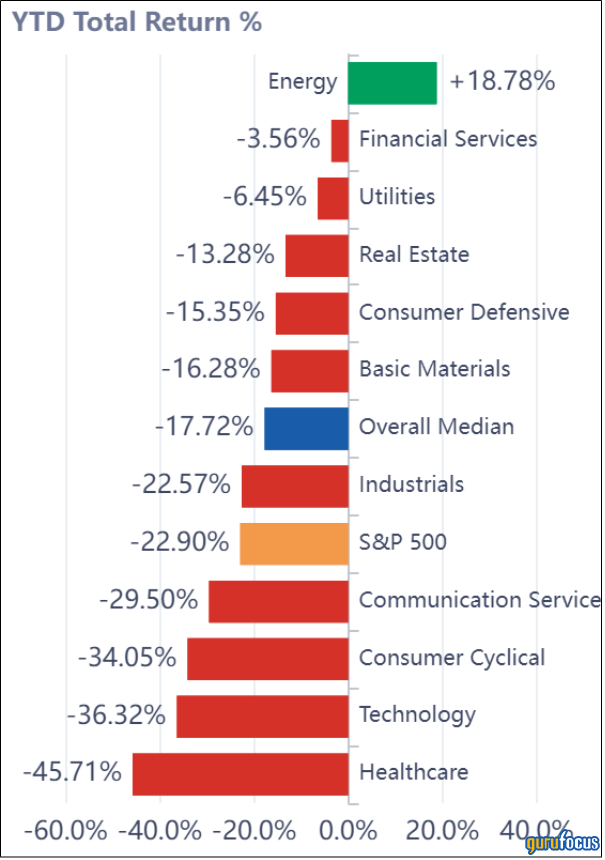 In the first quarter, Ketterer boosted her stake in Petroleo Brasileiro (

PBR.A, Financial), or Petrobas, by 7.24% to 5.09 million preferred shares. The stake accounts for 1.7% of the equity portfolio. GuruFocus estimates she has gained 5.33% on the investment since establishing it in the fourth quarter of 2019.

The GF Value Line suggests the stock, while undervalued, is a possible value trap currently based on its historical ratios, past financial performance and future earnings projections. As such, potential investors should do thorough research before making a decision. 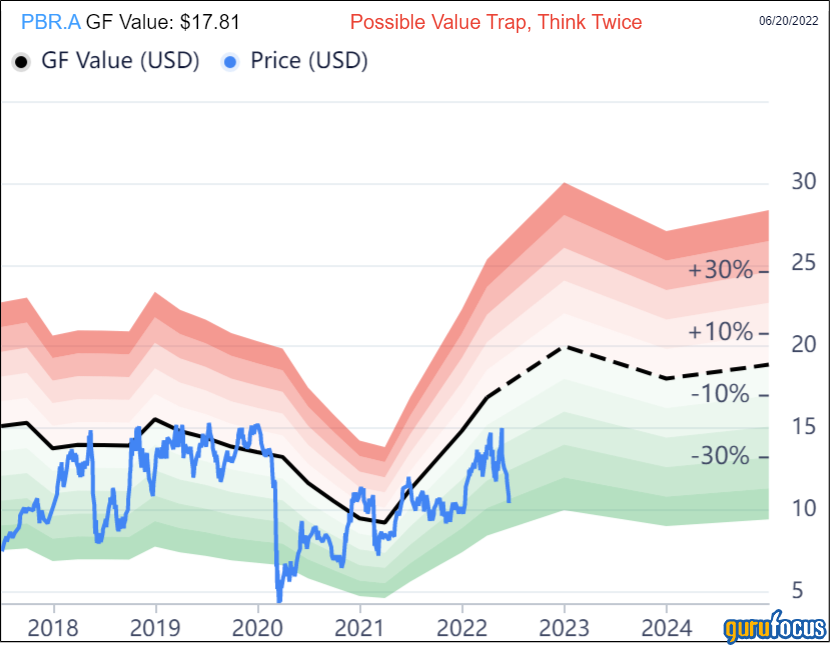 Regardless, the company has high outperformance potential with a GF Score of 90 out of 100. It received high marks for GF Value, growth and profitability as well as middling ranks for momentum and financial strength. 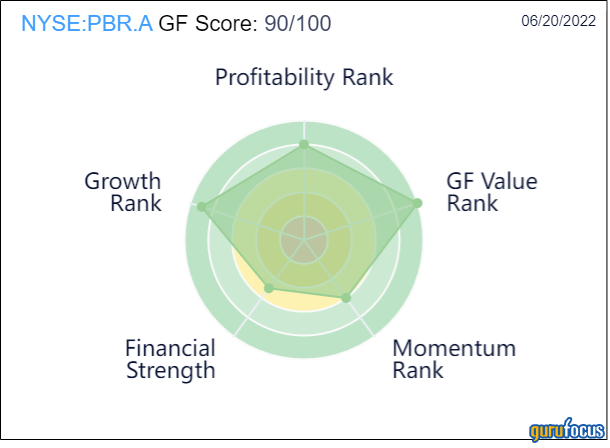 GuruFocus rated Petrobas’ financial strength 5 out of 10. While the company has adequate interest coverage, the Altman Z-Score of 1.68 warns it could be at risk of bankruptcy. The return on invested capital also eclipses the weighted average cost of capital, meaning value is being created as the company grows.

The company’s profitability fared better with an 8 out of 10 rating, driven by an expanding operating margin and returns on equity, assets and capital that top a majority of competitors. Petrobas also has a high Piotroski F-Score of 9 out of 9, indicating conditions are healthy, and a predictability rank of one out of five stars. According to GuruFocus, companies with this rank return an average of 1.1% annually over a 10-year period.

Of the gurus invested in Petrobas’ preferred stock,

The guru upped her position in TotalEnergies (

TTE, Financial) by 2.56% during the quarter. With a weight of 0.86% in the equity portfolio, she now holds 710,893 shares total. GuruFocus data shows Ketterer has lost an estimated 3.70% on the investment so far.

The French company, which produces and markets its energy products on a global scale, has a market cap of $134.79 billion; its shares closed at $51.30 on Friday with a price-earnings ratio of 8.63, a price-book ratio of 1.21 and a price-sales ratio of 0.72. 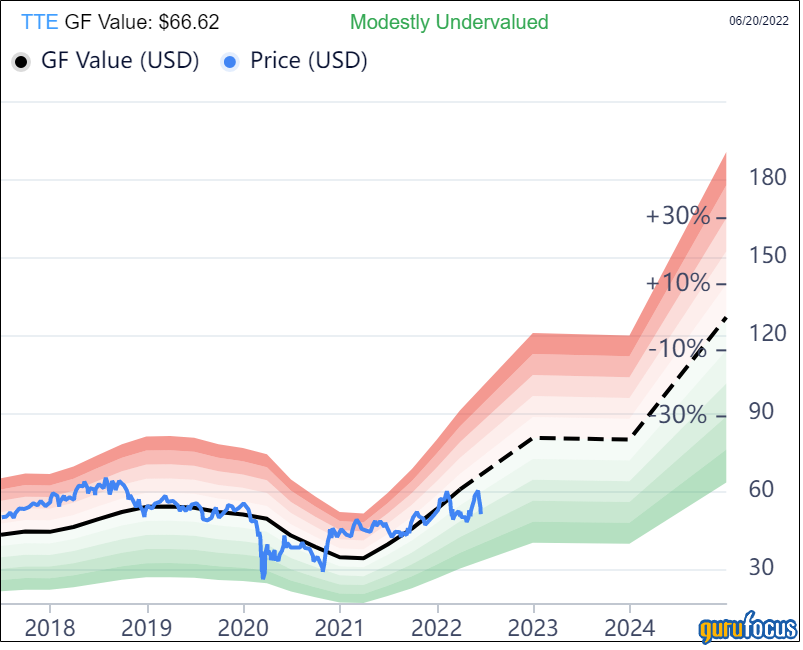 The GF Score of 79 out of 100, however, indicates the company has average performance potential. It ranked in high grades for GF Value and profitability, middling points for financial strength and momentum and a low rank for growth. 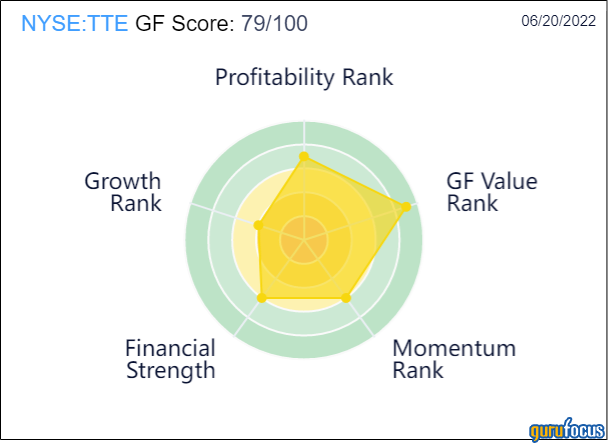 TotalEnergies’ financial strength was rated 6 out of 10 by GuruFocus. Although the company has issued new long-term debt in recent years, it is at a manageable level due to adequate interest coverage. The Altman Z-Score of 1.44, however, indicates it could be at risk of bankruptcy. Value creation is occurring since the ROIC overshadows the WACC.

The company’s profitability scored a 7 out of 10 rating on the back of strong margins and returns that top a majority of industry peers. TotalEnergies is also supported by a high Piotroski F-Score of 9 and, despite recording losses in operating income in recent years, a one-star predictability rank.

With a 1.01% stake, Fisher has the largest stake in TotalEnergies. Other top guru investors include the

The investor increased her Shell (

SHEL, Financial) holding by 24.93% during the quarter. She now holds 621,887 shares, which represent 0.82% of the equity portfolio. GuruFocus data shows she has gained an estimated 13.31% on the investment since establishing it in the third quarter of 2021.

The London-based oil and gas company, which was formerly known as Royal Dutch Shell before its name changed in January, has a $186.93 billion market cap; its shares closed at $49.93 on Friday with a price-earnings ratio of 9.78, a price-book ratio of 1.16 and a price-sales ratio of 0.74. 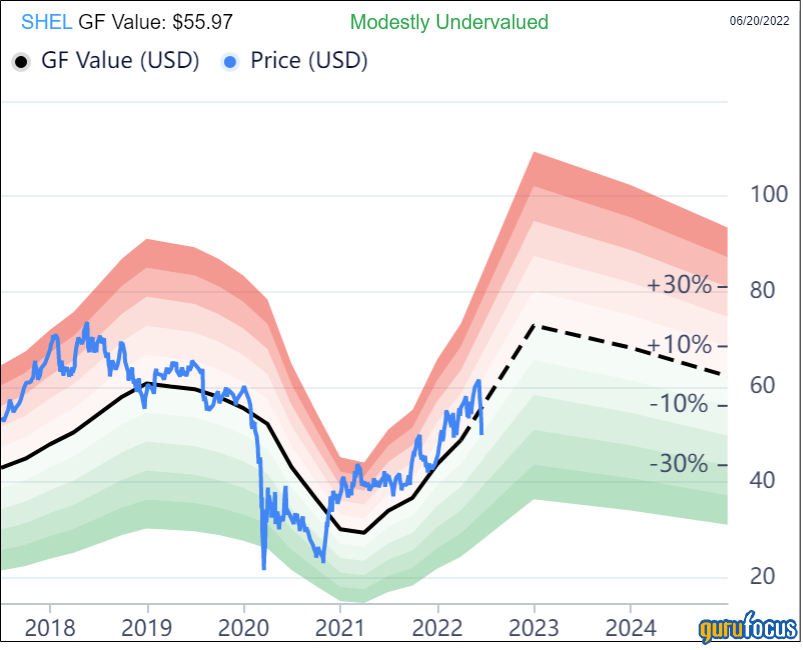 The company has a GF Score of 73 out of 100, meaning its likely to have average performance going forward. It got high points for profitability, middling marks for financial strength and GF Value and low grades for growth and momentum. 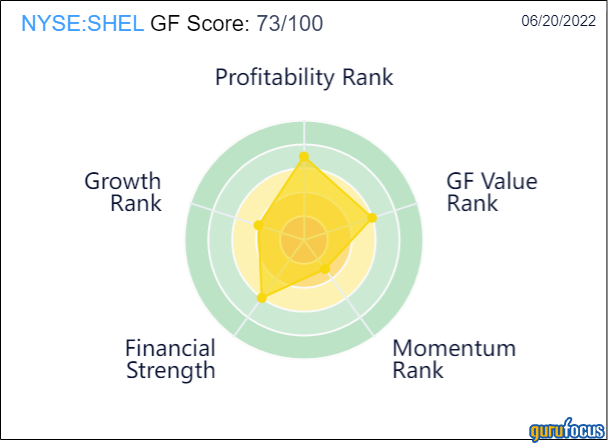 GuruFocus rated Shell’s financial strength 6 out of 10. Despite having sufficient interest coverage, the Altman Z-Score of 2.05 indicates the company is under some pressure due to a decline in revenue per share over the past several years. The ROIC also exceeds the WACC, implying value is being created.

The company’s profitability scored a 7 out of 10 rating, driven by margins and returns that outperform over half of its competitors, a high Piotroski F-Score of 9 and a one-star predictability rank.

BP, Financial) stake by 10.35% in the most recent quarter. Making up 0.78% of the equity portfolio, she now owns 1.11 million shares total. GuruFocus says she has lost an estimated 0.62% on the investment so far.

The GF Value Line suggests the stock is fairly valued. 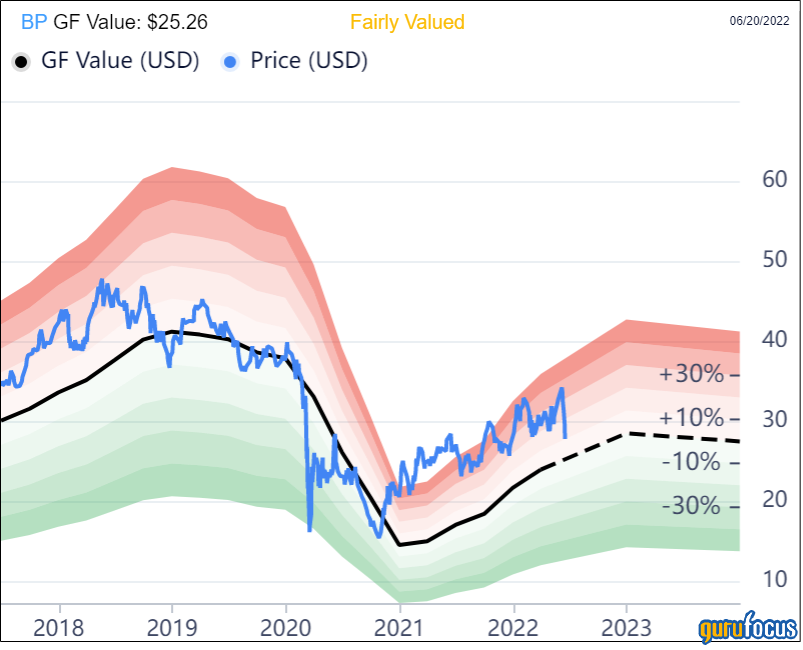 The company has poor future performance potential, however, based on the GF Score of 66 out of 100. While it recorded middling marks for profitability, financial strength and momentum, it got low grades for growth and GF Value. 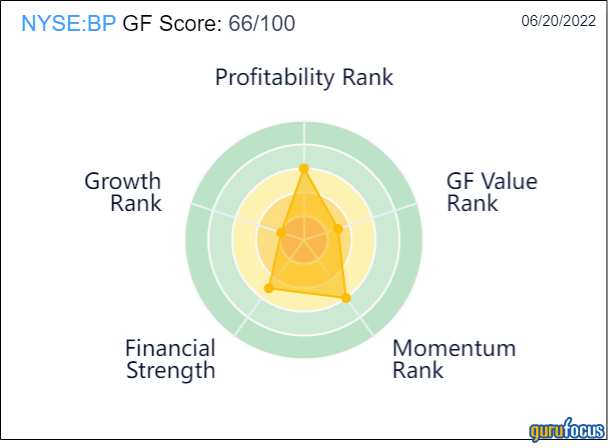 BP’s financial strength was rated 5 out of 10 by GuruFocus on the back of weak interest coverage and a low Altman Z-Score of 0.84 that warns it could be at risk of bankruptcy. The ROIC surpasses the WACC, however, indicating value is being created.

The company’s profitability did not fare much better, scoring a 6 out of 10 rating on the back of negative margins and returns that underperform a majority of industry peers. It also has a moderate Piotroski F-Score of 5, meaning conditions are typical for a stable company. Due to recording a decline in revenue per share over the past several years, BP’s one-star predictability rank is on watch.

Of the gurus invested in BP, Fisher has the largest stake with 0.44% of its outstanding shares. Cohen, Simons’ firm, Grantham and

CPG, Financial) holding by 28.37% to 526,000 shares. The stock represents 0.09% of the equity portfolio. GuruFocus data shows Ketterer has gained an estimated 45.64% on the investment since establishing it in the fourth quarter of 2021.

According to the GF Value Line, the stock is currently significantly overvalued. 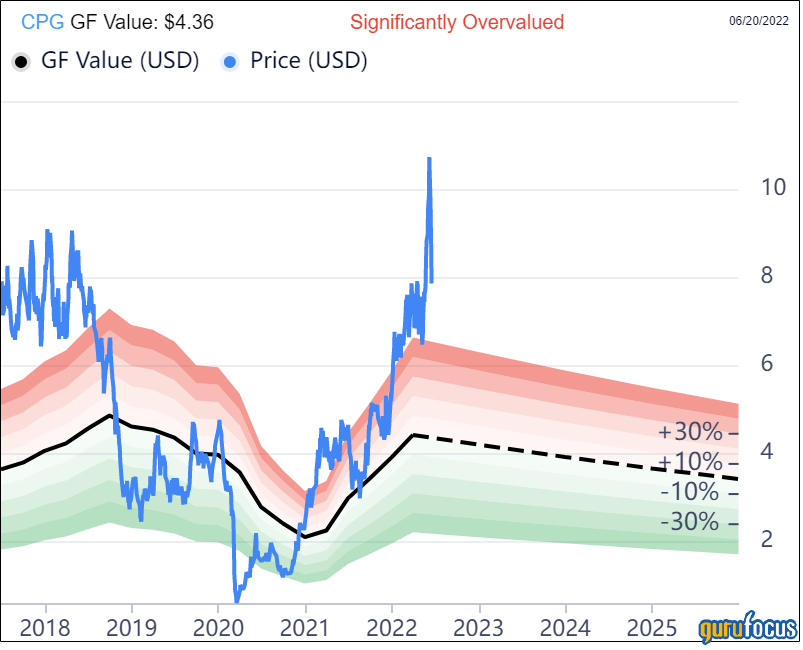 It has poor future performance potential, though, based on its GF Score of 55 out of 100. The company had moderate momentum, financial strength and profitability ranks, but low points for growth and GF Value. 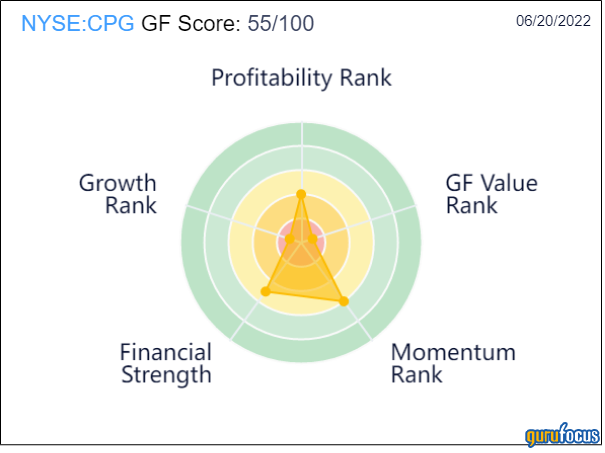 GuruFocus rated Crescent Point Energy’s financial strength 5 out of 10, driven by adequate interest coverage. The Altman Z-Score of 1.19, however, warns the company could be in danger of bankruptcy. The ROIC is also outshone by the WACC, so it is struggling to create value.

The company’s profitability fared even worse, scoring a 4 out of 10 rating. While Crescent Points’ margins and returns outperform a majority of competitors, it has a moderate Piotroski F-Score of 6. Despite revenue per share declining in recent years, it has a one-star predictability rank.

Simons’ firm has the largest stake in Crescent Point with 1.11% of its outstanding shares.

Additional holdings in the energy space

Another stock Ketterer owned in the energy sector as of the end of the first quarter was China Petroleum & Chemical Corp. (