According to GuruFocus Real-Time Picks, a Premium feature based on 13D, 13G and Form 4 filings with the Securities and Exchange Commission, Buffett invested in another 9.6 million shares of the Houston-based oil and gas producer on June 22. The stock traded for an average price of $55.36 per share on the day of the transaction.

He now holds 152.71 million shares total, which account for 2.32% of the equity portfolio. GuruFocus data shows Buffett has gained approximately 16.82% on the investment so far, which the 13F filing for the first quarter showed was his eighth-largest holding.

The exploration and production company, which has operations in the U.S., Latin America and the Middle East, has a $53.60 billion market cap; its shares were trading around $56.91 on Thursday with a price-earnings ratio of 8.32, a price-book ratio of 3.53 and a price-sales ratio of 1.88. 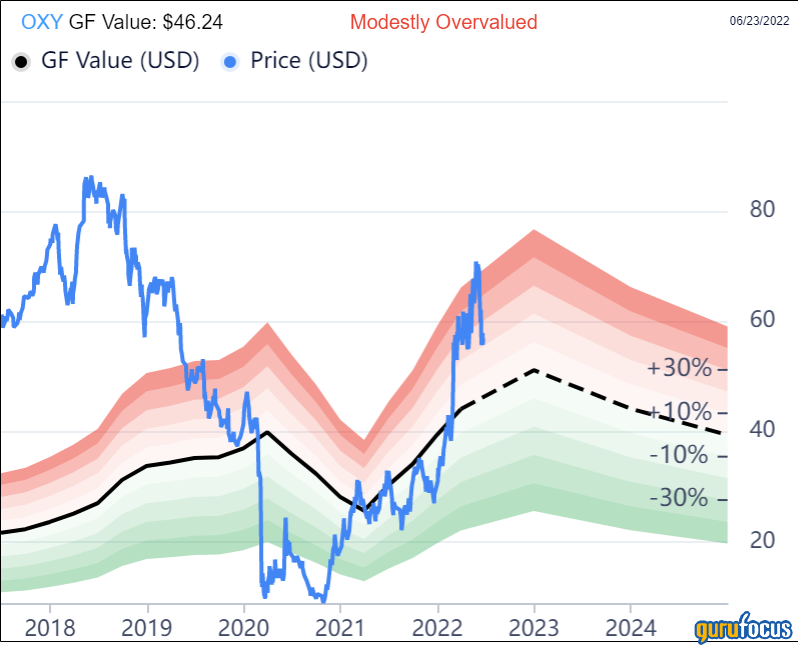 The GF Score of 69 out of 100 also indicates the company has poor future performance potential. It received high points for profitability and middling ranks for growth and financial strength, but got low grades for GF Value and momentum. 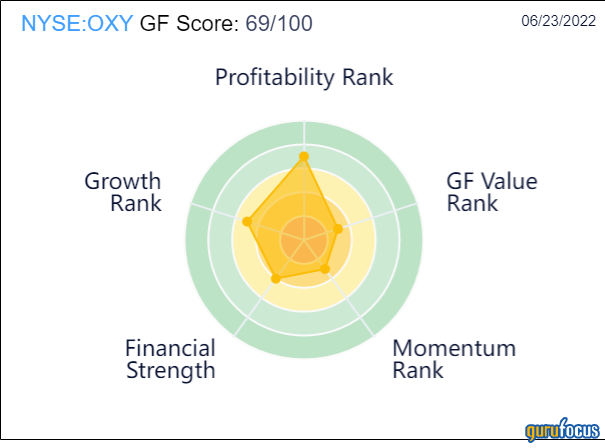 During Berkshire’s annual shareholder meeting on April 30, Buffett disclosed he established his initial common stock investment between Feb. 28 and March 16 after reviewing an analyst presentation. In addition to this position, he holds preferred shares of the company along with warrants to purchase common shares following a $10 billion deal with Occidental to fund its acquisition of Anadarko in 2019.

"She says she doesn't know the price of oil next year. Nobody does," Buffett said. "But we decided it made sense. And two weeks later, we had 14%."

After several years of sitting on Berkshire’s growing cash pile, Buffett has gone on a bit of a buying spree this year. In his annual shareholder letter released on Feb. 26, the investor said that "internal opportunities deliver far better returns than acquisitions" and little "excites us" in equity markets.

Following the announcement of the Occidental stake, he divulged a position in HP Inc. (

GuruFocus rated Occidental’s financial strength 4 out of 10 on the back of weak interest coverage and a low Altman Z-Score of 1.56 that warns it could be at risk of going bankrupt. The company may also be becoming less efficient since assets are building up at a faster rate than revenue is growing. However, value is being created as the company grows since the return on invested capital eclipses the weighted average cost of capital.

The company’s profitability fared better with a 7 out of 10 rating, driven by strong margins and returns on equity, assets and capital that top a majority of competitors. Occidental also has a high Piotroski F-Score of 7 out of 9, meaning operations are healthy, and a predictability rank of one out of five stars. GuruFocus research found companies with this rank return an average of 1.1% annually over a 10-year period.

Buffett is by far the company’s largest guru shareholder with a 16.29% stake. Other significant guru investors include Dodge & Cox, the

The majority of Berkshire’s $363.55 billion equity portfolio, which was composed of 49 stocks as of the end of the first quarter, was invested in the technology and financial services sectors.

Another company in the energy sector it held as of March 31, according to 13F filings, was Chevron Corp. (