These companies have beaten the index year to date

As the first half of 2022 comes to a close, investors are cautiously approaching the remainder of the year as the economy continues to contend with high inflation and interest rates, rising oil prices, geopolitical tensions and supply chain disruptions.

Warren Buffett (Trades, Portfolio) has managed to find value in this volatile environment with the recent purchases of Occidental Petroleum Corp. (OXY, Financial), HP Inc. (HPQ, Financial), Citigroup Inc. (C, Financial) and several other stocks, as well as increased bets on some older positions. A few of his current holdings have even outperformed the S&P 500 Index year to date.

The guru’s $293.45 billion equity portfolio consisted of 49 stocks as of March 31. A majority of the portfolio was invested in technology stocks at 45.03%, while the financial services sector has a weight of 27.19% and the consumer defensive space represents 11.29%.

According to the All-in-One Screener, a Premium feature of GuruFocus, stocks in Buffett’s first-quarter 13F equity portfolio that outperformed the S&P 500 by at least 15% over the last six months are Verizon Communications Inc. ( 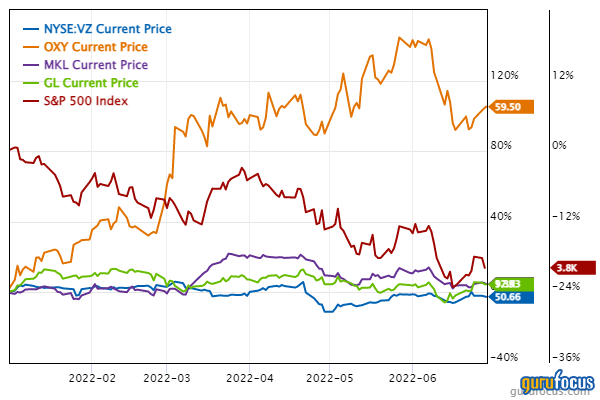 VZ, Financial) represents 0.02% of Buffett’s equity portfolio as of the end of the first quarter.

The GF Value Line suggests the stock is modestly undervalued currently based on its historical ratios, past financial performance and future earnings projections. 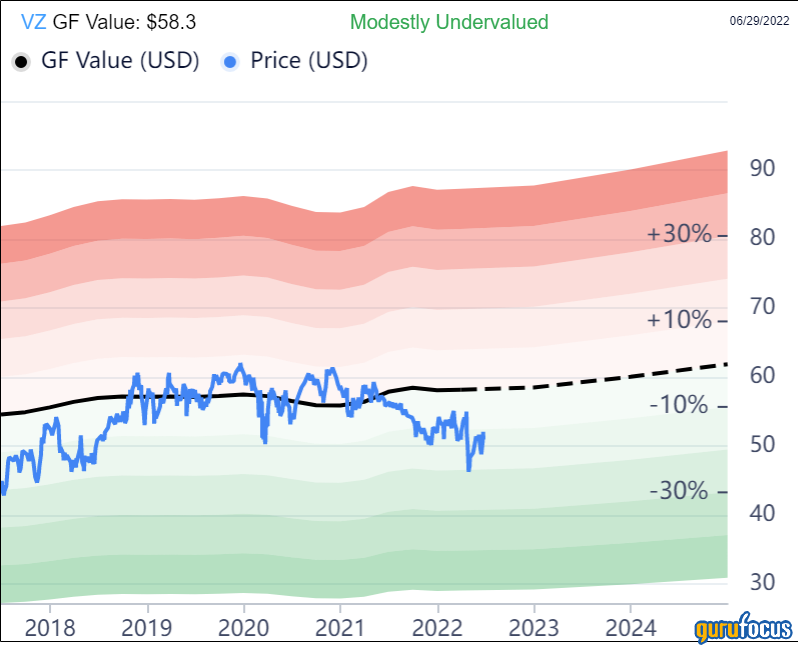 GuruFocus rated Verizon’s financial strength 4 out of 10. Despite issuing new long-term debt over the past several years, it is still at a manageable level as a result of adequate interest coverage. The Altman Z-Score of 1.35 warns it is in distress, however, and could be at risk of going bankrupt. The return on invested capital also overshadows the weighted average cost of capital, meaning value is being created as the company grows.

The company’s profitability scored a 7 out of 10 rating as a result of an expanding operating margin and strong returns on equity, assets and capital that outperform a majority of competitors. Verizon is also supported by a moderate Piotroski F-Score of 4 out of 9, meaning conditions are typical for a stable company, and a predictability rank of one out of five stars. According to GuruFocus research, companies with this rank return an average of 1.1% annually over a 10-year period.

Of the many gurus invested in Verizon,

OXY, Financial) total, which now account for 2.34% of the equity portfolio. The 13F filing for the first quarter showed it is his eighth-largest holding.

Having climbed around 100% year to date, the oil and gas producer headquartered in Houston has a market cap of $55.59 billion; its shares were trading around $58.51 on Wednesday with a price-earnings ratio of 8.62, a price-book ratio of 3.67 and a price-sales ratio of 1.95. 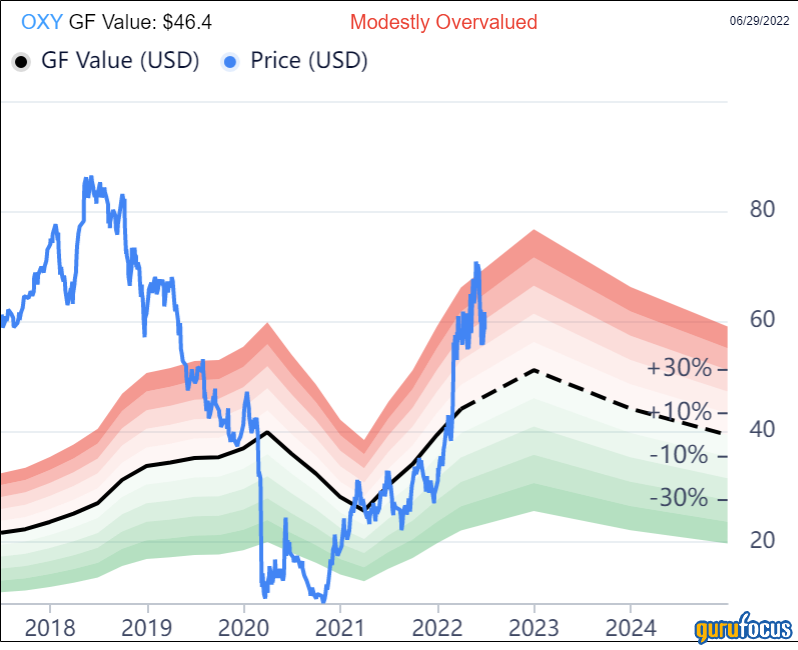 Occidental’s financial strength was rated 4 out of 10 by GuruFocus on the back of weak interest coverage and a low Altman Z-Score of 1.63 that warns it could be in danger of bankruptcy. The company may also be becoming less efficient since assets are building up at a faster rate than revenue is growing. However, value is being created since the ROIC eclipses the WACC.

The company’s profitability fared better with a 7 out of 10 rating, driven by strong margins and returns that top a majority of industry peers. Occidental also has a high Piotroski F-Score of 7, indicating operations are healthy, and a one-star predictability rank.

With a 16.38% stake, Buffett is by far the company’s largest guru shareholder. Other significant guru investors include Dodge & Cox, the 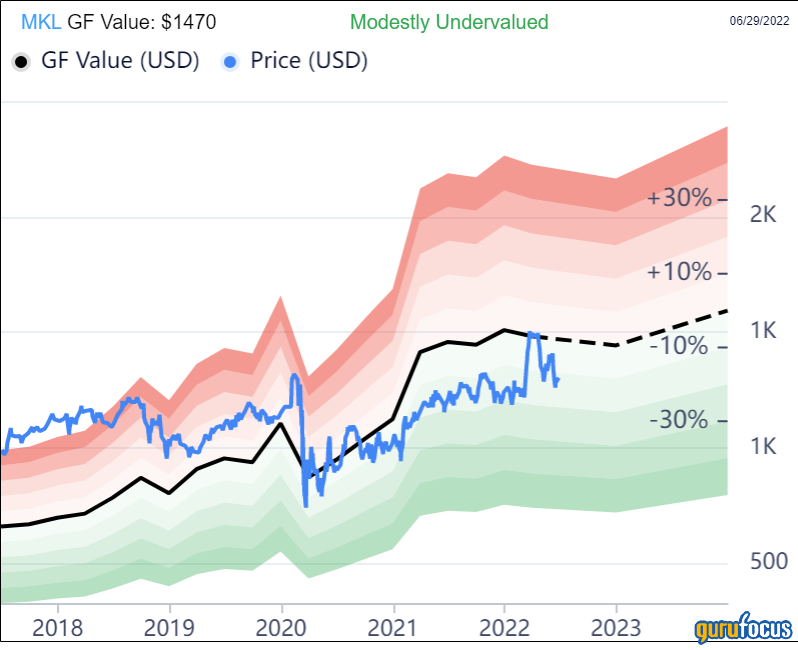 GuruFocus rated Markel’s financial strength 6 out of 10. Although the company has issued new long-term debt in recent years, it is at a manageable level due to sufficient interest coverage.

The company’s profitability scored a 7 out of 10 rating as a result of margins and returns topping a majority of competitors and a moderate Piotroski F-Score of 4. Due to a slowdown in revenue per share growth over the past 12 months, the 2.5-star predictability rank is on watch. GuruFocus data shows companies with this rank return, on average, 7.3% annually.

Buffett has the largest stake in Markel with 3.10% of its outstanding shares.

The Oracle of Omaha has a 6.35 million-share position in Globe Life (

GL, Financial), which reflects 0.18% of the equity portfolio.

Increasing nearly 5% year to date, the life and health insurance company headquartered in McKinney, Texas has a market cap of $9.67 billion; its shares were trading around $97.49 on Wednesday with a price-earnings ratio of 13.7, a price-book ratio of 1.41 and a price-sales ratio of 1.93. 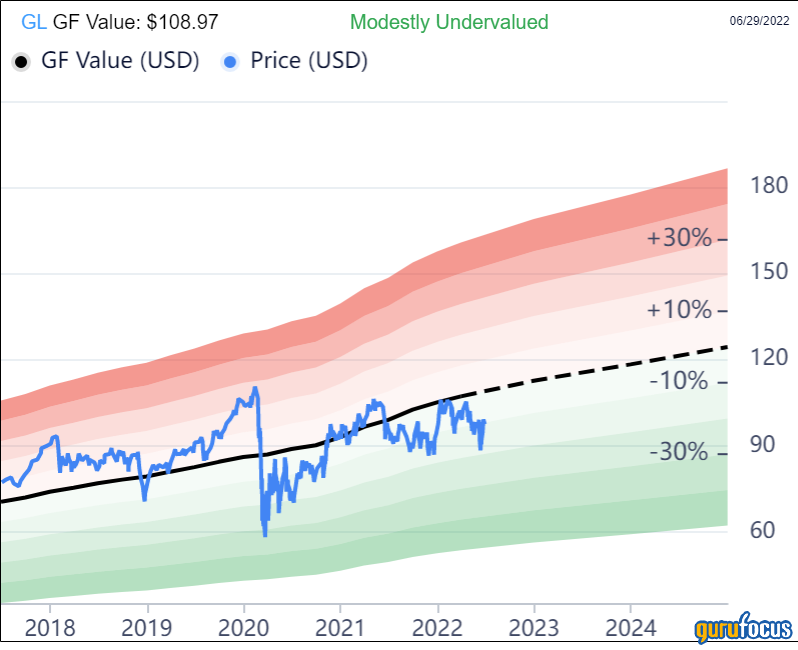 Globe Life’s financial strength was rated 4 out of 10 by GuruFocus. Although the company has issued new long-term debt in recent years, it is at a manageable level due to sufficient interest coverage. The WACC also exceeds the ROIC, so the company is struggling to create value.

The company’s profitability fared better, scoring an 8 out of 10 rating as its margins and returns are outperforming versus industry peers. Globe Life also has a moderate Piotroski F-Score of 5, while consistent earnings and revenue growth contributed to a five-star predictability rank. GuruFocus found companies with this rank return an annual average of 12.1%.

The largest shareholder of the company is Buffett with a 6.44% stake.