The First-Half Review: The Worst in 52 Years

GuruFocus founder Charlie Tian reflects on the first half of 2022

The U.S. stock market just experienced its worst half in 52 years. The prices of almost every type of financial asset declined, from stocks to bonds to cryptocurrencies. The broad market indicator, the S&P 500, is down 20.6%. The Nasdaq index is down 29.5%. The prices of government bonds across all maturities declined. The once hot cryptocurrency market collapsed. Some are completely wiped out. Bitcoin lost more than 60% during the first half. Even the FANG index, which represents the largest 10 tech giants, is down more than 35%.

What went up must go down.

What is happening to bitcoin reminds me of what

Charlie Munger (Trades, Portfolio) once said: "In my life, I try and avoid things that are stupid, evil and make me look bad in comparison to somebody else... and bitcoin does all three."

For the stock market, although we had a very bad first half of the year, one sector actually did very well. That is the energy sector. The median gain of the stocks in the energy sector is an impressive 18%, even after the recent retraction in June. Oil companies such as Occidental Petroleum ( 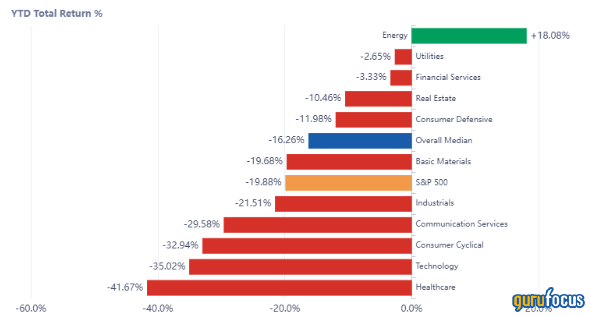 The worst performing sector is health care. The median loss across the sector is a painful 41%. But if we look into the sector, large drug companies such as Merk (MRK) and Bristol-Mayers (BMY) were up more than 20%. The stocks that dragged the health care sector down are mostly the biotech companies. More than 140 of them are now traded at below cash level. You can find those with the GuruFocus All-In-One screener.

Among S&P 500 companies, the best performers were again oil companies, from upstream through downstream, including the aforementioned OXY, XOM, CVX, etc. The worst performing four companies were Netflix ( 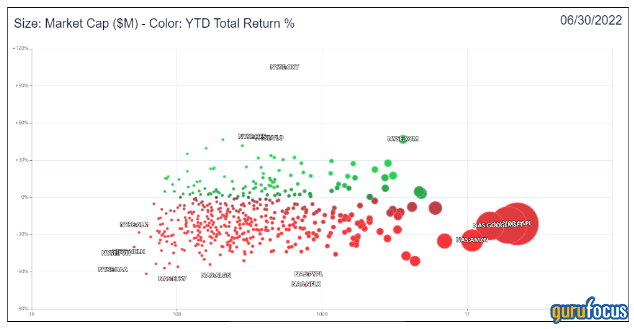 Overvaluation is certainly one of the reasons why those four companies performed so badly. The table below shows the PE ratios from these companies 12 months ago and currently. After a two-thirds decline in price, Netflix stock finally looks more reasonable, as do the other three. Their current reasonable valuations may position them for a better second half.

What about the second half of the year? The Fed is going to continue its course of raising interest rates. The economy is facing the risk of falling into recession, if it is not already in one. Will the market continue its decline?

If we can learn anything from history, let’s look at the last time the market did this miserably. It was 1970. The country was facing high inflation, just as it is now. The market lost 21% during the first six months of 1970. But it gained 27% during the second half, recovering all the losses.

Will history repeat itself? It is anyone’s guess.

But there are a few aspects that make me more optimistic:

In the financial crisis-caused recession in 2008, the largest mortgage companies Fannie Mae and Freddie Mac would be bankrupt if they were not saved by the U.S. government. Shareholders were wiped out anyway. Wall Street giants AIG, Lehman Brothers and Bear Stearns went bankrupt.

We will not see this kind of bankruptcy this time. All the large companies are healthy. They have high profit margins and are flooded with cash. The banks are strong. The consumers are doing well, too, as household debt service payments as a share of disposable personal income in the United States are at the lowest levels in decades.

The market certainly has a lot more opportunities than a year ago. Our strategy is still buying high quality companies at reasonable valuations.

In the next few months, I am sure that there will be moments when the market is scary. When that comes, always stay optimistic and remind yourself of what

“Be Greedy When Others Are Fearful!”

Disclosure: the author does not own any of the stocks mentioned and has no intention of buying them in the next 72 hours.