Can APA Corp Ride the Oil and Gas Tailwinds?

As the economy continues recovering from the pandemic, oil and gas prices have stabilized at relatively high levels due to the combination of travel picking back up and Russia's invasion of Ukraine. Fossil fuel companies have profited enormously from this surge in demand. A confluence of favorable factors including persistent low supply, removing Russian oil from the Western market and increasing demand for natural gas indicate that energy prices will continue to remain elevated for the near future. The present supply/demand imbalance has made the energy sector one of the few shining lights in an otherwise bleak bear market environment.

After nearly a decade of dismal performance, perhaps the resurgence of the energy sector is what prompted Warren Buffet to state at Berkshire Hathaway’s (

However, even in favorable market conditions, not all companies are created equal. APA Corp. (

APA, Financial), formerly known as Apache, is a small unhedged independent exploration and production company that is poised to capitalize on these auspicious near term conditions, but how successful will it be?

In light of the dramatic increase in oil and natural gas prices, a question naturally arises: at what point in the escalating price environment will consumers begin to reduce their consumption of gasoline? In this regard, several factors are noteworthy and presage a fortuitous set of circumstances for energy companies.

Consumers have shown a remarkable resilience to increasing gas prices, as indicated by strong post-pandemic demand. According to AAA’s Independence Day travel forecast, a record 42 million people were expected to hit the road this year during the holiday weekend spanning June 30 to July 4 (though we have no way of knowing the final count for sure).

Patrick De Haan, head of petroleum analysis at GasBuddy, believes that there won’t be any demand destruction until gas prices start to top $6 a gallon. De Haan notes that there has been a “high tolerance” for high fuel prices, so the demand curve isn’t likely to start dropping off “until we see some of those apocalyptic price numbers like $6.”

The Ukraine conflict and the attendant sanctions levied by Western nations has removed petroleum from the world’s third largest exporter off the Western market. And as the chart below indicates, even though WTI has dropped below $100 recently, it is unlikely that the price will drop precipitously as limited supply will not be replenished anytime soon. As it emerges from its Covid lockdown state, China’s need for energy will contribute to a supply shortage as well. 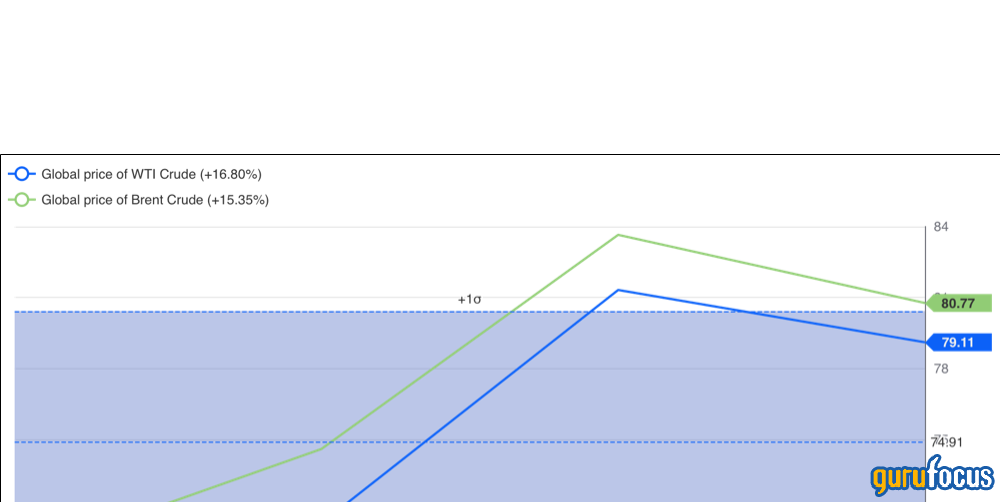 There are other favorable geopolitical developments that bode well for APA Corp. and other oil and gas stocks. As Russia leverages it natural gas abundance as a telling political weapon, it will continue to slowly turn off the spigot for Europe. At present, for Germany, its natural gas shortage is so precarious that the country is anticipating a potentially devastating recession as its industry and consumers rely on natural gas for heating and industrial production across a plethora of businesses. “We must brace ourselves for the fact that this situation won’t change in the foreseeable future... in other words: we stand before a historic challenge,” German Chancellor Olaf Scholz told reporters recently.

Given Europe’s voracious demand for natural gas, APA Corp.’s balanced oil and natural gas production mix bodes well for its ability to capitalize on the increasing demand. According to the International Energy Agency, the global demand for natural gas will increase by 29% over the next 20 years. Thus, the company has some measure of protection from any long-term drop in demand for oil due to the concerted efforts of developed economies to wean themselves off fossil fuels.

Additionally, given the dramatic increases in gas prices, it is now economically feasible for APA Corp. to capture the natural gas byproducts from oil well flaring instead of igniting the residue emitted. This change to the extraction process will enhance the company’s production growth and lead to additional revenue that will increase free cash flow

Since it is highly likely that the structural imbalance in the oil and gas markets will continue unabated for the near term, there are several metrics that indicate that APA Corp. is presently undervalued.

As indicated by the chart below, APA Corp. has several other favorable valuation ratios: 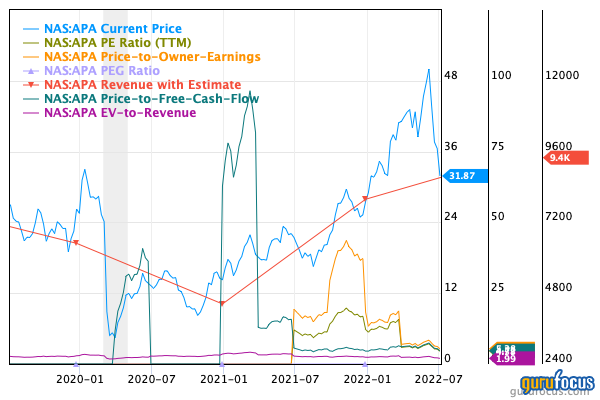 A review of the charts below shows that the company’s price-to-free-cash-flow ratio is another metric that indicates it is undervalued. A comparison with industry giants shows both Exxon Mobil ( 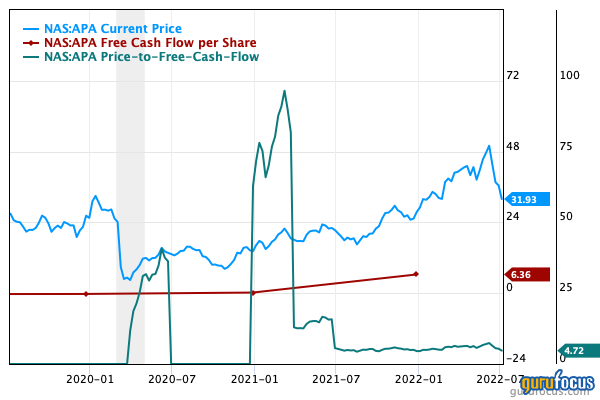 APA Corp. bears a GuruFocus profitability ranking of 6 out of 10, with favorable operating as well as net margins. A perusal of the Peter Lynch chart below supports the conclusion that the stock looks undervalued: 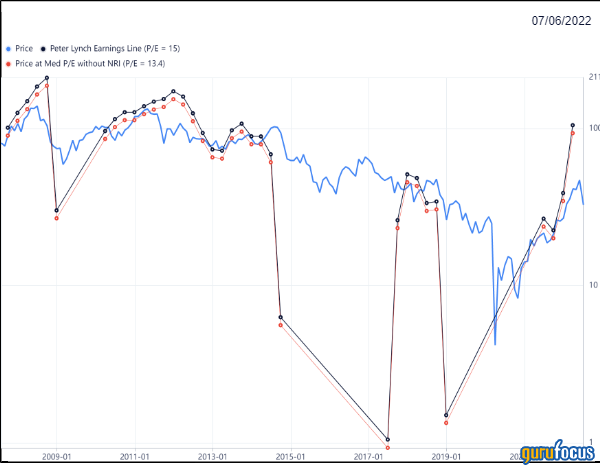 The fly in the ointment is that APA has significant debt that must be paid down. Its cash-debt equity-to-debt ratios are abysmal. This undue leverage risk is somewhat attenuated due to an adequate interest coverage ratio of 9.56. The dramatic increase in free cash flow should also mitigate the debt risk as well.

Disclosure: I maintain long positions in both Exxon and Chevron.