The guru’s New York-based firm implements a bottom-up research process to find small and mid-size growth companies with open-ended opportunities and significant competitive advantages to invest in for the long term while they are trading at attractive prices. Baron, who manages the Baron Asset Fund, the Baron Growth Fund and Baron Partners Fund, is also known for ignoring short-term market fluctuations, especially when he believes the fundamental reasons for purchasing the stock have not changed.

Having reduced the position during the first quarter, GuruFocus Real-Time Picks, a Premium feature based on 13D and 13G filings, show Baron sold another 4.03 million shares of the U.K.-based company on June 30, impacting the equity portfolio by -0.11%. The stock traded for an average price of $11.12 per share on the day of the transaction.

The firm now holds 1.5 million shares of Manchester United total, which represent 0.04% of the equity portfolio. GuruFocus data shows Baron has lost an estimated 10.52% on the investment since establishing it in the fourth quarter of 2012.

The company, which operates a professional soccer club of the same name along with its related ancillary activities, has a $1.78 billion market cap; its shares were trading around $10.92 on Thursday with a price-book ratio of 6.38 and a price-sales ratio of 2.36.

Based on its historical ratios, past financial performance and future earnings projections, the GF Value Line shows the stock, while undervalued, is a possible value trap currently. As such, potential investors should do thorough research before making a decision. 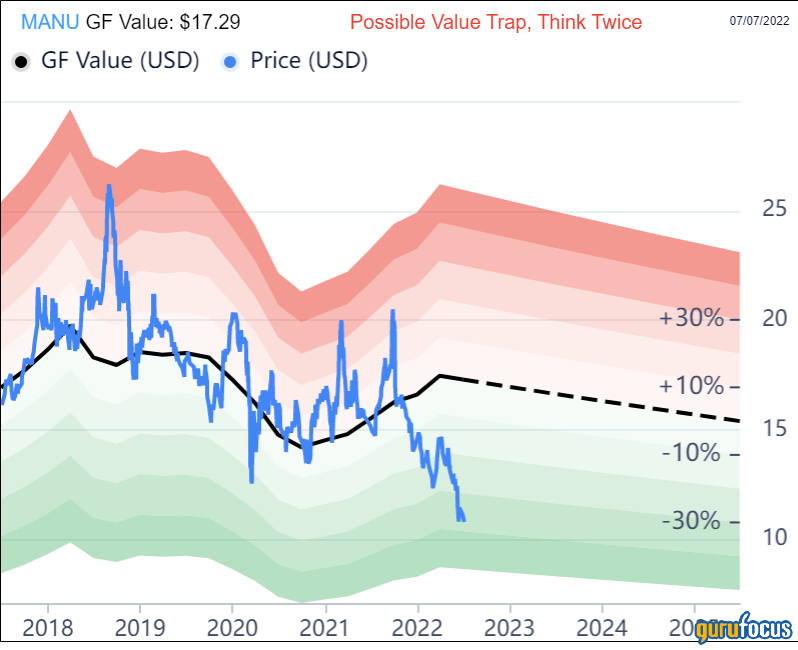 Additionally, its GF Score is low at 67 out of 100, suggesting the stock has poor future performance potential. The company received high points for GF Value, middling marks for profitability and momentum and low ranks for financial strength and growth. 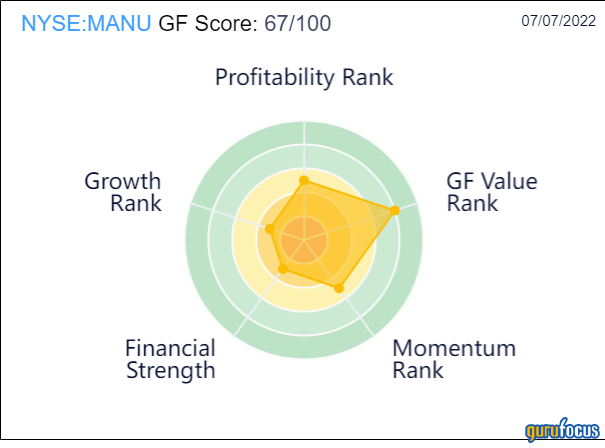 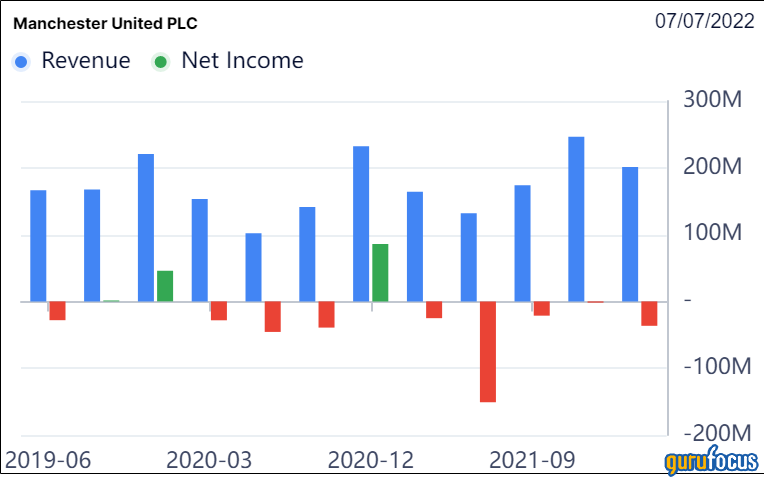 In a statement, CEO Richard Arnold noted Manchester United’s revenue has “continued to recover from the pandemic, reflecting the enduring strength of our commercial operations, which in turn support our ability to continue to invest in the Club.”

In addition to reporting record global membership sales for the 2021-22 season, the company saw record renewals of season tickets and executive club memberships for the 2022-23 season.

Arnold also commented on the “disappointing season for the men’s first team,” in which it placed sixth.

“Work is well underway to address this, led by our Football Director, John Murtough and our new manager, Erik ten Hag,” he said, “Resilience and high standards are core values for Manchester United, and we are determined to achieve better results next season and beyond.”

GuruFocus rated Manchester United’s financial strength 3 out of 10. In addition to debt-related ratios that are underperforming versus other diversified media players, the low Altman Z-Score of 0.67 warns the company could be at risk of bankruptcy if it does not improve its liquidity position.

The company’s profitability fared a bit better with a 5 out of 10 rating, though its margins and returns are negative and underperform a majority of competitors. Manchester United is also supported by a moderate Piotroski F-Score of 4 out of 9, meaning conditions are typical for a stable company. The predictability rank of one out of five stars, however, is on watch as a result of declining revenue per share. GuruFocus research found companies with this rank return an average of 1.1% annually over a 10-year period.

Baron’s $40.74 billion equity portfolio, which was composed of 387 stocks as of March 31, is most heavily invested in the consumer cyclical, technology and financial services sectors.